Bursts of Methane May Have Warmed Early Mars

The presence of water on ancient Mars is a paradox. There’s plenty of geographical evidence that rivers periodically flowed across the planet’s surface. Yet in the time period when these waters are supposed to have run — three to four billion years ago — Mars should have been too cold to support liquid water.

So how did it stay so warm?

Researchers from the Harvard John A. Paulson School of Engineering and Applied Sciences (SEAS) suggest that early Mars may have been warmed intermittently by a powerful greenhouse effect. In a paper published in Geophysical Research Letters, researchers found that interactions between methane, carbon dioxide and hydrogen in the early Martian atmosphere may have created warm periods when the planet could support liquid water on the surface.

“Early Mars is unique in the sense that it’s the one planetary environment, outside Earth, where we can say with confidence that there were at least episodic periods where life could have flourished,” said Robin Wordsworth, assistant professor of environmental science and engineering at SEAS, and first author of the paper. “If we understand how early Mars operated, it could tell us something about the potential for finding life on other planets outside the solar system.”

SEAS researchers suggest that early Mars may have been warmed intermittently by a powerful greenhouse effect, possibly explaining water on the planet's surface billions of years ago. 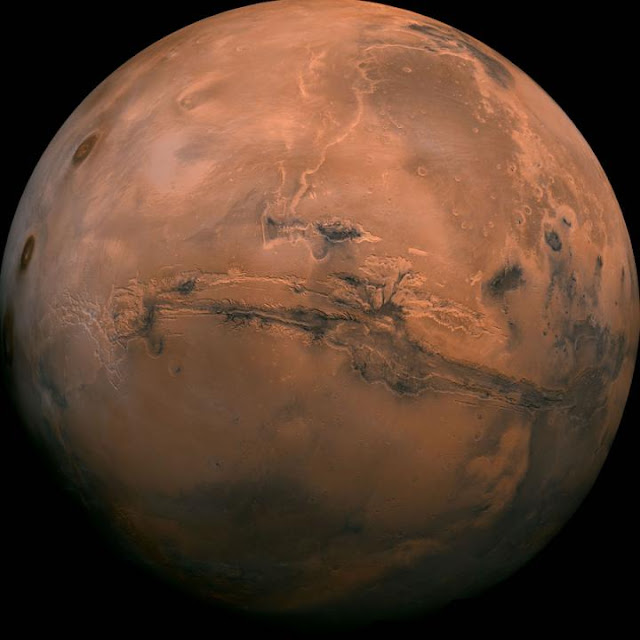 Four billion years ago, the Sun was about 30 percent fainter than today and significantly less solar radiation — a.k.a. heat — reached the Martian surface. The scant radiation that did reach the planet was trapped by the atmosphere, resulting in warm, wet periods. For decades, researchers have struggled to model exactly how the planet was insulated.

The obvious culprit is CO2. Carbon dioxide makes up 95 percent of today’s Martian atmosphere and is the most well-known and abundant greenhouse gas on Earth.

But CO2 alone does not account for Mars’ early temperatures.

“You can do climate calculations where you add CO2 and build up to hundreds of times the present day atmospheric pressure on Mars and you still never get to temperatures that are even close to the melting point,” said Wordsworth.

There must have been something else in Mars’ atmosphere that contributed to a greenhouse effect.

The atmospheres of rocky planets lose lighter gases, such as hydrogen, to space over time. (In fact, the oxidation that gives Mars its distinctive hue is a direct result of the loss of hydrogen.)

Wordsworth and his collaborators looked to these long-lost gases — known as reducing gases — to provide a possible explanation for Mars’ early climate. In particular, the team looked at methane, which today is not abundant in the Martian atmosphere. Billions of years ago, however, geological processes could have been releasing significantly more methane into the atmosphere. This methane would have been slowly converted to hydrogen and other gases, in a process similar to that occurring today on Saturn's moon, Titan.

To understand how this early Martian atmosphere may have behaved, the team needed to understand the fundamental properties of these molecules.

“When you’re looking at exotic atmospheres, you can’t compare them to Earth’s atmosphere,” said Wordsworth. “You have to start from first principles. So we looked at what happens when methane, hydrogen and carbon dioxide collide and how they interact with photons. We found that this combination results in very strong absorption of radiation.”

“This research shows that the warming effects of both methane and hydrogen have been underestimated by a significant amount,” said Wordsworth. “We discovered that methane and hydrogen, and their interaction with carbon dioxide, were much better at warming early Mars than had previously been believed.”

The researchers hope that future missions to Mars will shed light on the geological processes that produced methane billions of years ago.

“One of the reasons early Mars is so fascinating is that life needs complex chemistry to emerge,” said Wordsworth. “These episodes of reducing gas emission followed by planetary oxidation could have created favorable conditions for life on Mars.”