Breakthrough By Cell Biologists: We All Need Contacts or How Organelles Hug In Cells

Scientists have made a breakthrough in understanding how different compartments (or organelles) of human cells interact.

Organelles are the functional units of a cell. Like organs in a body, they perform specialised functions. To allow survival of the cell, organelles have to interact and cooperate. How this is mediated and regulated in the cell is an important and challenging question in cell biology.

Researchers at the University of Exeter have now discovered how two cell organelles - called peroxisomes and the endoplasmic reticulum (ER) - associate with each other at the molecular level and work together. 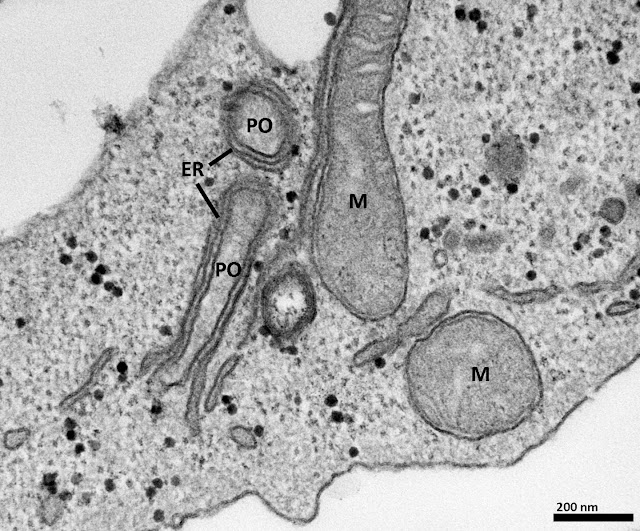 Copyright: The University of Exeter.


This cooperation is crucial for the production of specific lipids, which are essential for the function of nerve cells and can protect cells from oxidative damage.

Loss of peroxisome function leads to a range of severe or fatal disorders associated with developmental and neurological defects.

Close contacts between peroxisomes and the ER were observed more than 50 years ago in ultrastructural studies, but the molecular mechanism remained a mystery,” said lead author Dr Michael Schrader, of the University of Exeter.

“This is the first molecular tether identified in humans, which mediates the contact between these two important cell compartments.”

The study showed that a protein at the peroxisomes called ACBD5 directly interacts with a protein at the ER, called VAPB. This interaction links both organelles together and allows transfer of lipids between them.

When the interaction between VAPB and ACBD5 is lost, the ER and peroxisomes can no longer interact and this lipid transfer appears to be prevented.

The researchers are working with experts from the Academic Medical Center in Amsterdam, where a patient with an ACBD5 deficiency has been identified and linked to a peroxisomal defect.

This patient has severe damage to the brain and retinas, affecting eyesight, and Dr Schrader said Exeter’s research and similar studies were essential if such conditions are to be diagnosed and ultimately treated.

“If we understand organelle interaction better we might also be able to use this knowledge to protect cells from certain stress conditions which are linked to age-related conditions like neurodegeneration, blindness and diabetes,” he said.

The paper, entitled: “ACBD5 and VAPB mediate membrane associations between peroxisomes and the ER,” is published in the Journal of Cell Biology.

The journal will publish it alongside another paper, from researchers at the Hospital for Sick Children in Toronto, which independently came to similar findings, and will highlight the new discoveries in a Spotlight article.

Contacts and sources:
Alex Morrison
The University of Exeter
on January 27, 2017