Bats Remember Directions: Researchers Identify the Cells That Orient Bats – And Possibly Humans – Toward a Destination

Navigating to a destination, whether you are a human or a bat, requires a complex set of calculations and interactions among brain cells. Weizmann Institute of Science researchers working with bats, have now revealed the network of cells that encode the direction of one’s destination. Among other things, their findings may help explain how memory loss and “getting lost” tend to go together in Alzheimer’s patients.

The Nobel Prize in Physiology or Medicine was awarded in 2014 for the discovery of place cells and grid cells – neurons in a part of the brain called the hippocampal formation that tell us where we are in relation to our surroundings. When we are on the move, these cells chart our starting point. But the way in which our brains direct us to a specific destination has remained an open question.

Prof. Nachum Ulanovsky and research student Ayelet Sarel of the Weizmann Institute’s Neurobiology Department, working together with their colleagues Drs. Arseny Finkelstein and Liora Las, devised a simple experiment with bats to answer this question. The findings of their research appeared in Science.

Egyptian fruit bat. In today's issue of Science, Sarel et al report on a new functional class of hippocampal neurons in bats, which encode the direction and distance to spatial goals – suggesting a novel neural mechanism for goal-directed navigation. 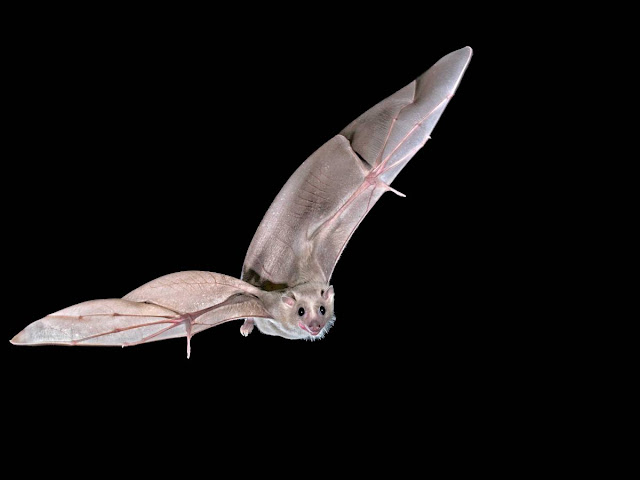 The experiment took place in a special room in which the Egyptian fruit bats that Ulanovsky works with can fly around. Tiny tracking devices attached to the bats enabled the researchers to track their flight paths, on the one hand, and record the activities of the neurons in the area of the hippocampus that deals with navigation, on the other. The bats’ destination: a stand with the fruit they prefer.

Around one third of the neurons in a bat’s hippocampus represented the animal’s current position in the flight room. But in addition, some 19% of the cells were engaged in encoding the destination – the beckoning fruit stand. To further understand how this encoding works, Ulanovsky and Sarel then hid the fruit stand behind a screen. The bats’ neurons continued to aim toward the stand – “through the wall” – even though it was hidden from sight.

In other words, say the researchers, the direction in which we need to travel to get to our destination is represented in the brain based primarily on our memory, and not, for example, on our sense of vision That is why we can find the coffee shop hidden behind tall buildings, and the bat can find its favorite fruit tree, even when it is beyond a range of hills. It may also explain how injury to the hippocampus, as well as Alzheimer’s disease, often present as getting lost on the way to navigational destinations.

The scientists also identified a group a nerve cells that calculate and encode the distance to a bat’s destination, while some of the cells, they found, encode both direction and distance. “This is a bit like the navigation systems in our cars that give distance and travel time, in addition to directions. The brain has found a simpler way, encoding these in a sort of vector, or ‘arrow’ pointing the way,” says Ulanovsky. “These neurons are continually computing and integrating information on our direction and the distance to our destination.”

Prof. Nachum Ulanovsky's research is supported by the Lulu P. and David J. Levidow Fund for Alzheimers Diseases and Neuroscience Research; the Adelis Foundation; the Mike and Valeria Rosenbloom through the Mike Rosenbloom Foundation; and the Harold and Faye Liss Foundation.