Researchers at Oregon State University have discovered a 100-million-year-old insect preserved in amber with a triangular head, almost-alien and “E.T.-like” appearance and features so unusual that it has been placed in its own scientific “order” – an incredibly rare event.

There are about 1 million described species of insects, and millions more still to be discovered, but every species of insect on Earth has been placed in only 31 existing orders. Now there’s one more.

The findings have been published in the journal Cretaceous Research and describe this small, wingless female insect that probably lived in fissures in the bark of trees, looking for mites, worms or fungi to feed on while dinosaurs lumbered nearby. It was tiny, but scary looking.

“This insect has a number of features that just don’t match those of any other insect species that I know,” said George Poinar, Jr., an emeritus professor of entomology in the OSU College of Science and one of the world’s leading experts on plant and animal life forms found preserved in the semi-precious stone amber. 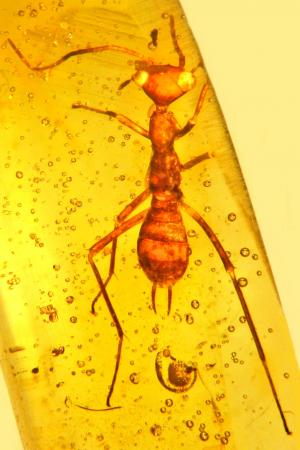 
“I had never really seen anything like it. It appears to be unique in the insect world, and after considerable discussion we decided it had to take its place in a new order.”

Perhaps most unusual, Poinar said, was a triangular head with bulging eyes, with the vertex of the right triangle located at the base of the neck. This is different from any other known insect, and would have given this species the ability to see almost 180 degrees by turning its head sideways.

The insect, probably an omnivore, also had a long, narrow, flat body, and long slender legs. It could have moved quickly, and literally seen behind itself. It also had glands on the neck that secreted a deposit that scientists believe most likely was a chemical to repel predators.

This insect head, that researchers thought almost resembled the way aliens are portrayed, was so unusual it required the extinct insect to be placed in an entirely new scientific order. 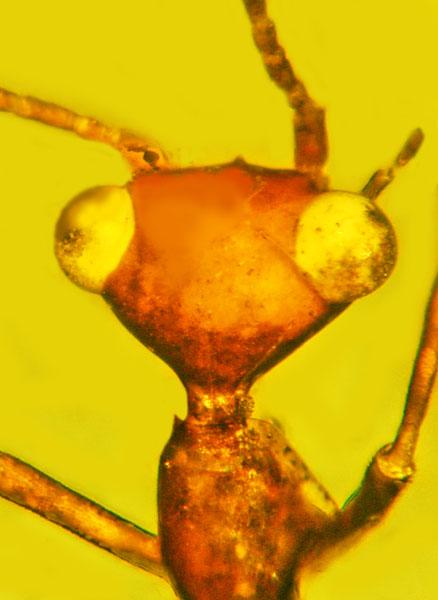 The insect has been assigned to the newly created order Aethiocarenodea, and the species has been named Aethiocarenus burmanicus, in reference to the Hukawng Valley mines of Myanmar – previously known as Burma – where it was found. Only one other specimen of this insect has been located, also preserved in Burmese amber, Poinar said.

Those two specimens, which clearly belong to the same species, now comprise the totality of the order Aethiocarenodea. The largest order of insects, by comparison, is Coleoptera, the beetles, with hundreds of thousands of known species.

Needless to say, this species from such ancient amber is long extinct. It obviously had special features that allowed it to survive in the forests of what is now Burma, 100 million years ago, but for some unknown reason it disappeared. Loss of its preferred habitat is a likely possibility.

Nick glands on this extinct insect preserved in amber appear to release a substance that may have been used to repel predators. 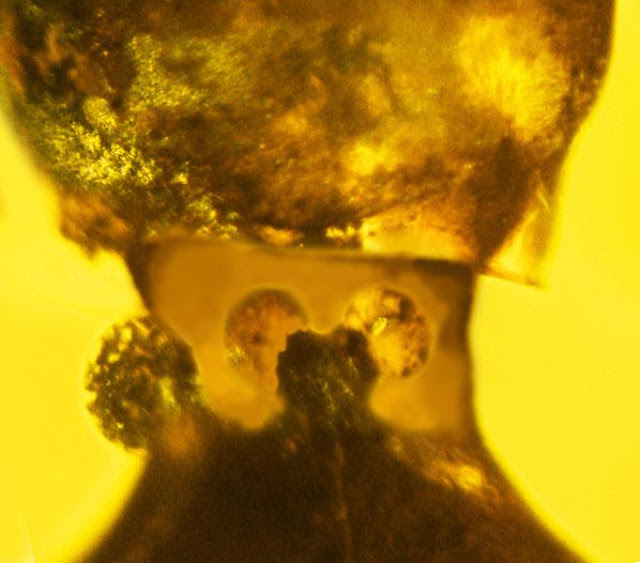 “The strangest thing about this insect is that the head looked so much like the way aliens are often portrayed,” Poinar said. “With its long neck, big eyes and strange oblong head, I thought it resembled E.T. I even made a Halloween mask that resembled the head of this insect. But when I wore the mask when trick-or-treaters came by, it scared the little kids so much I took it off.”