Researchers discovered a wolf-sized fossil otter that is 3 times larger than modern otters.

A paper in Journal of Systematic Paleontology, published by Taylor & Francis, reveals the discovery of one of the largest otter species ever found. This discovery was made in the Yunnan Province, Southwestern China, by an international team conducting groundbreaking research into the evolution of a little known fossil genus of the otter family.

This newly discovered species of otter, Siamogale melilutra, was about the size of a wolf and weighed approximately 110lbs, almost twice as large as the largest living otters. It belongs to an ancient lineage of extinct otters, which goes back at least 18 million years, that was previously known only from isolated teeth recovered from Thailand. The discovery of a complete cranium, mandible, dentition and various skeletal elements at Shuitangba provides information about the taxonomy, evolutionary history, and functional morphology of this new species.

This is an artist's reconstruction of two Siamogale melilutra individuals, one feeding on a fresh water clam. 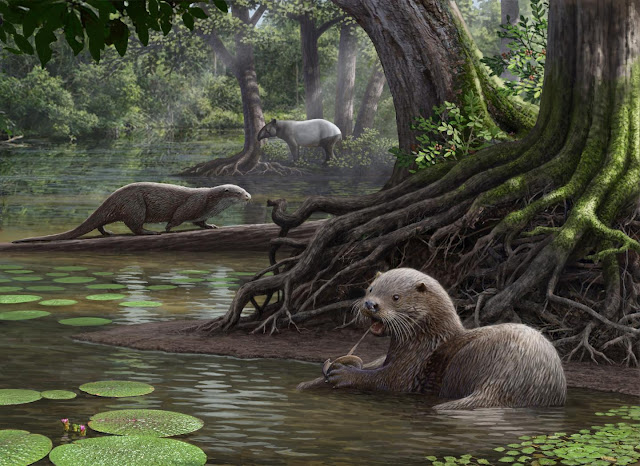 "While the cranium is incredibly complete, it was flattened during the fossilization process. The bones were so delicate that we could not physically restore the cranium. Instead, we CT-scanned the specimen and virtually reconstructed it in a computer," said Dr. Denise Su, Curator & Head of Paleobotany and Paleoecology at the Cleveland Museum of Natural History. The CT restoration revealed a combination of otter-like and badger-like cranial and dental feature, hence its species name, "melilutra," which refers to meles, Latin for badger and lutra, Latin for otter. The completeness of the specimens found allows the scientists to better understand the evolutionary history of otters and specifically of this enigmatic genus from the Miocene of which there had been little information.

It had a large and powerful jaw, with enlarged, bunodont (=rounded-cusped) cheek teeth. These characteristics appear to have been adaptations for eating large shellfish and freshwater mollusks, both of which were found in abundance at Shuitangba. "From the vegetation and other animal groups found at Shuitangba, we know that it was a swampy, shallow lake with quite dense vegetation," said Su.

"Multiple otter lineages have low-crowned, bunodont teeth, leading us to ask the question if this was inherited from a common ancestor or if this was convergent evolution based on common dietary behaviors across different species," said Dr. Xiaoming Wang, lead author of the paper and Curator and Head of Vertebrate Palaeontology at the Natural History Museum of Los Angeles County. "Our phylogenetic analysis suggests that bunodont dentition independently appeared at least three times over the evolutionary history of otters."

This groundbreaking discovery now has scientists trying to understand other aspects of the life of Siamogale melilutra. "The discovery of the otter helps solve some questions about otter relationships, but has opened the door to new questions," said Wang. "For instance, why was it so large, how did it crack open mollusks and shellfish for food, and how did it move in the water and on land?"

"Continued future studies by our group will address these fundamental questions and give us a more complete picture of its paleobiology," said Su.