Under the support from the Strategic Priority Research Program of the Chinese Academy of Sciences (Pilot B Program): The emergence of cosmological structures, Dr. Yiping Shu and Prof. Shude Mao from the National Astronomical Observatories, Chinese Academy of Sciences (NAOC) and their collaborators recently discovered a sample of 17 new strong gravitational lens systems from data collected by the Hubble Space Telescope (HST). This will be a unique sample for studying the nature of dark matter and high-redshift Lyα emitters.

Dark matter is believed to contribute more than 80% of the total mass in our Universe as suggested by numerous observational facts. However, unlike the ordinary matter we usually see in daily life, dark matter does not emit any light and therefore appears to be completely invisible to most of our detection instruments. The only way of detecting dark matter is through its gravitational effects. One such unique probe is the strong gravitational lensing phenomenon in which the light rays from a distant object (the “source”) are deflected by the gravity of an intervening object (the “lens”) and eventually form distorted, multiple images. “The image separations can provide a robust and accurate measurement of the total mass of the lens object, including dark matter,” comments Bolton. 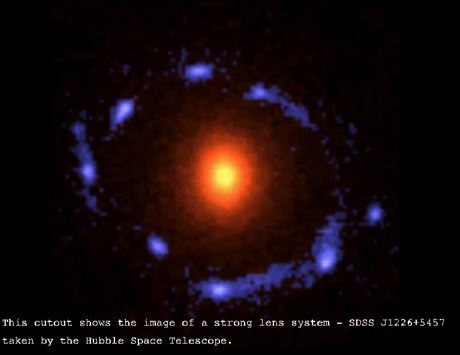 In order to push the detection limit downward, Shu and collaborators specifically selected 21 strong-lens candidates involving redshift 2-3 Lyα emittersas the background sources from approximately one million galaxies. Lyα emitters are young galaxies that emit strong Lyα emission due to the transition of the electron of a hydrogen atom from the first excited state to the ground state. “Compared to previous samples, Lyα emitters are intrinsically smaller by a factor of 3 to 5, and therefore can push the detection limit down by roughly an order of magnitude,” comments Shu. Follow-up HST imaging observations confirmed that 17 of the 21 candidates are definite strong lenses (see Figure 1). “This is also the very first discovery of galaxy-scale strong lenses made by Chinese astronomers using the HST data,” adds Mao. 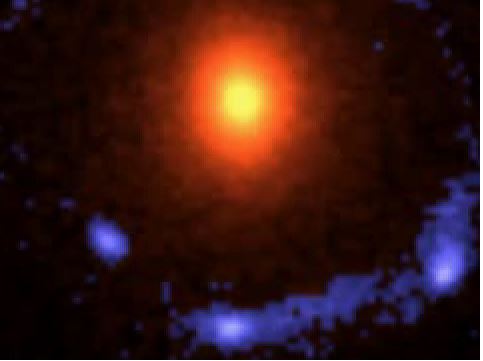 
By analyzing the HST data, Shu and collaborators found that the background Lyα emitters are generally irregular and clumpy. “With the aid of lensing magnification, we can resolve the Lyα emitters in exceptional detail with sizes from a hundred to several thousand light years,” comments Perez-Fournon. “Future follow-up observations of the Lyα emitters will expand our understanding of how galaxies form and evolve,” adds Zheng. This specially designed, new strong-lens sample promises to be an invaluable resource for studying high-redshift Lyα emitters and the nature of dark matter.