More than 100 billion micrometeorites (MMs) fall to Earth each year. Until now, scientists believed that these particles could only be found in the cleanest environments, such as the Antarctic. In their new paper for Geology, M.J. Genge and colleagues show that, contrary to that expectation, micrometeorites can be recovered from city rooftops (for this example, primarily in Norway) and that, unlike those from the Antarctic, they are the youngest collected to date.

This is not a new proposition. It has been a popular belief among amateur astronomers that such modern-day extraterrestrial dust can be collected on roofs in urban environments. A study from 1941 reported large numbers of magnetic spherules collected in urban areas, but Genge and colleagues cite two studies in the 1950s that asserted that such spherules are artificial. 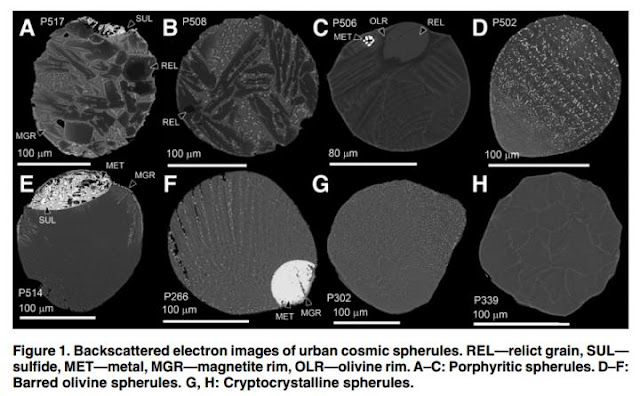 
Despite these studies, write Genge and colleagues, amateur collection projects in built-up areas are common.

Micrometeorites are thought to include materials derived from both asteroids and comets. Although some smaller dust particles survive atmospheric entry without significant heating, reports show that the majority of particles undergo melting during their passage through the atmosphere. According to Genge and colleagues, the most abundant of these, particularly at large sizes, are cosmic spherules (completely melted droplets dominated by quench textures).

In Geology, Genge and colleagues report the results of a study of 500 MMs collected among particles recovered by Project Stardust (Oslo, Norway; http://project-stardust. com) in urban areas. They show that a subset of 48 particles are cosmic spherules, representing the youngest large MMs yet recovered.