Why Big Brains Are Rare

As a species we're so brain-proud it doesn't occur to most of us to ask whether a big brain has disadvantages as well as cognitive benefits.

"We can think of tons of benefits to a larger brain, but the other side of that is brain tissue is incredibly 'expensive' and increasing brain size comes at a heavy cost," said Kimberley V. Sukhum, a graduate student in biology in Arts & Sciences at Washington University in St. Louis.

So evolving a large brain requires either a decrease in other demands for energy or an increase in overall energy consumption, said Bruce Carlson, Sukhum's advisor and professor of biology in Arts & Sciences.

Previous studies in primates, frogs and toads, birds and fish found support for both hypotheses, leaving the evolutionary path to a larger brain unclear.

The brain of Gnathonemus petersii is larger in proportion to its body than a human's. To keep up with the energy demands of its big brain, it has evolved a Schnauzenorgan, a chin appendage covered with electroreceptors that helps it locate prey (calories). 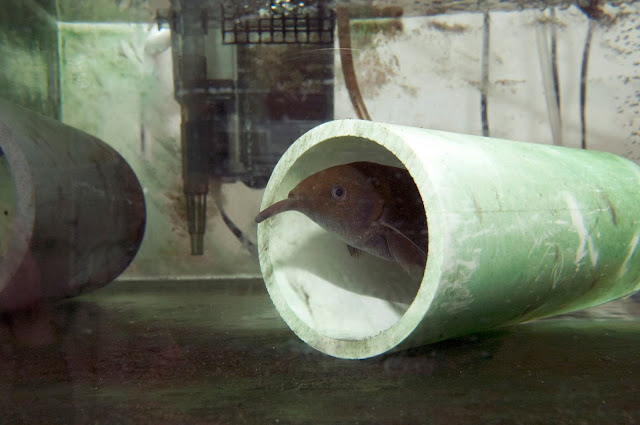 
Carlson's lab studies mormyrid electric fishes from Africa, which use weak electric discharges to locate prey and to communicate with one another.

The mormyrids have a reputation as large-brained fish and indeed one species (the fish in the top photo) has a brain that constitutes 3 percent of its body size, comparable to human brains, which range from 2 to 2.5 percent. But it was unclear whether other mormyrids were equally brainy.

Examining 30 out of the more than 200 species in the mormyrid family, the scientists discovered that they have a wide variety of brain sizes.

"We realized this meant the fish presented a great opportunity to study the metabolic costs of braininess," Sukhum said.

Using oxygen consumption and the ability to tolerate hypoxia as proxies for energy use and energy demand, the scientists put the fish to the test. Sure enough, they found that the largest brained species had the highest demand for oxygen and the smallest brained species the lowest.

The results, published in the Dec. 21 issue of Proceedings of the Royal Society B, make a provocative pairing with an article published in the May 19, 2016 issue of Nature finding that large-brained humans have a much higher metabolic rate than the great apes.

What is the alternative?

Coming on this problem for the first time, you might be excused for thinking that of course it is necessary to eat more to feed a big brain.

Many studies, however, have shown that larger brains can be accommodated by skimping on other energetically expensive organs or processes.

For example a study of 30 species of frogs and toads published this September in The American Naturalist found that in these animals, the bigger the brain, the smaller the gut, -- another expensive organ.

Early studies of humans also suggested -- in part because the human basal metabolic rate is broadly similar to that of other primates --that the smaller human gut similarly accommodated the big human brain.

(How could a smaller gut, while it might use less energy, also supply more energy? The argument was that gut shrinkage must have coincided with a switch to a more nutritious diet includingf meat and tubers, and cooked food.)

In any case, more recent studies that looked not just at primates but rather at the great apes, our closest evolutionary relatives, found instead that basal metabolic rate and total energy expenditure scale with brain size.

Carlson suggests that confusion arose in earlier studies of brain size because big brains entail different costs and arise through different mechanisms than medium-sized brains. It might be possible to accommodate moderate increases in brain size, he said, by skimping on another organ or modifying behavior,. But the really big brains demand increases in total energy intake.

It's not all up-side

Having a body that needs to be fed more just to exist is a risky strategy both for mormyrids and people.

Carlson and Sukhum point out that the mormyrids’ ability to sense their environment by "electrolocation" helps them forage more efficiently. Some of the largest-brained mormyrids also have helpful appendages, such as the Schnauzenorgan or a tube snout that helps the fish extract invertebrates from crevices.

Despite these adaptations, the extravagant energy needs of large-brained fish may restrict them to environments where oxygen concentrations are consistently high, such as large fast-moving rivers. Meanwhile their smaller-brained cousins may be generalists able to survive in many more areas, including low-oxygen swamps as well as fast-moving rivers.

People, too, are remarkably vulnerable to any interruption in the food supply because of their big-brain energy budgets. We might mitigate this risk by efficient bipedal walking or cooking and sharing food -- but we also do it by storing fat. Body fat, the Nature authors point out, provides an important buffer against food shortfalls.