The Rhythm That Makes Memories Permanent

Scientists at the Institute of Science and Technology Austria (IST Austria) identify mechanism that regulates rhythmic brain waves -- inhibition at synapses is the key to make memories permanent.

Every time we learn something new, the memory does not only need to be acquired, it also needs to be stabilized in a process called memory consolidation. Brain waves are considered to play an important role in this process, but the underlying mechanism that dictates their shape and rhythm was still unknown. A study now published in Neuron shows that one of the brain waves important for consolidating memory is dominated by synaptic inhibition.

So-called sharp wave ripples (SWRs) are one of three major brain waves coming from the hippocampus. The new study, a cooperation between the research groups of Professors Peter Jonas and Jozsef Csicsvari at the IST Austria, found the mechanism that generates this oscillation of neuronal activity in mice. "Our results shed light on the mechanisms underlying this high-frequency network oscillation. As our experiments provide information both about the phase and the location of the underlying conductance, we were able to show that precisely timed synaptic inhibition is the current generator for sharp wave ripples." explains author Professor Peter Jonas.

During sharp wave ripples (shown on the top) the inhibitory conductance (blue curve) has a much higher amplitude than the excitatory conductance (red curve). This shows that inhibition is the underlying mechanism that creates the brain wave. 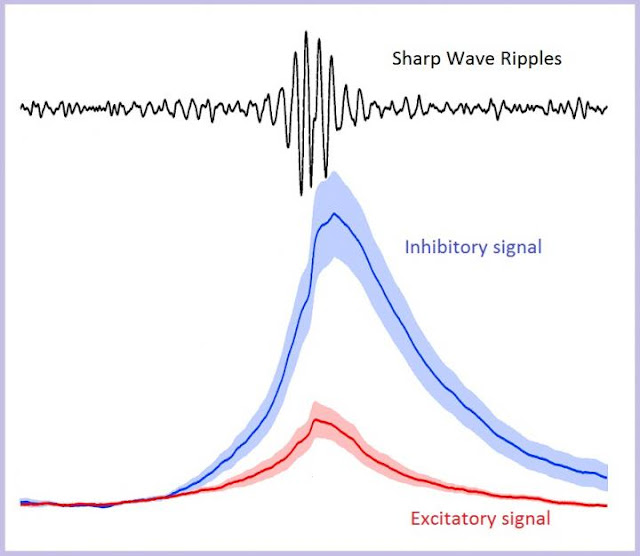 When neurons oscillate in synchrony, their electrical activity adds together so that measurements of field potential can pick them up. SWRs are one of the most synchronous oscillations in the brain. Their name derives from their characteristic trace when measuring local field potential: the slow sharp waves have a triangular shape with ripples, or fast field oscillations, added on. SWRs have been suggested to play a key role in making memories permanent.

In this study, the researchers wanted to identify whether ripples are caused by a temporal modulation of excitation or of inhibition at the synapse, the connection between neurons. For Professor Jozsef Csicsvari, a pooling of expertise was crucial in answering this question: "SWRs play an important role in the brain, but the mechanism generating them has not been identified so far - probably partly because of technical limitations in the experiments. We combined the Jonas group's experience in recording under voltage-clamp conditions with my group's expertise in analyzing electrical signals while animals are behaving. This collaborative effort made unprecedented measurements possible and we could achieve the first high resolution recordings of synaptic currents during SWR in behaving mice."

Preamplifiers and amplifiers used for the in vivo recording experiments described in the study. 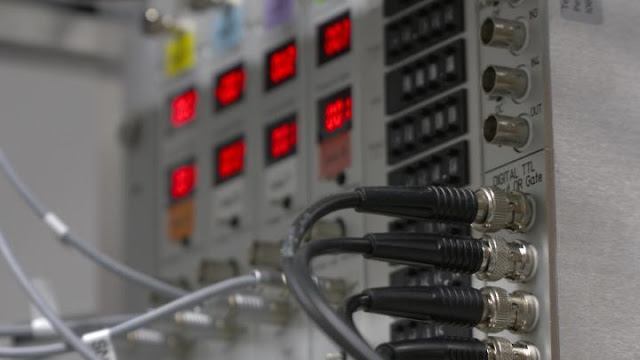 Credit: MotionManager
The neuroscientists found that the frequency of both excitatory and inhibitory events at the synapse increased during SWRs. But quantitatively, synaptic inhibition dominated over excitation during the generation of SWRs. Furthermore, the magnitude of inhibitory events positively correlated with SWR amplitude, indicating that the inhibitory events are the driver of the oscillation. Inhibitory events were phase locked to individual cycles of ripple oscillations. Finally, the researchers showed that so-called PV+ interneurons - neurons that provide inhibitory output onto other neurons - are mainly responsible for generating SWRs.

The authors propose a model involving two specific regions in the hippocampus, CA1 and CA3. In their model SWRs are generated by a combination of tonic excitation from the CA3 region and phasic inhibition within the CA1 region. Jian Gan, first author and postdoc in the group of Peter Jonas, explains the implications for temporal coding of information in the CA1 region: "In our ripple model, inhibition ensures the precise timing of neuronal firing. This could be critically important for preplay or replay of neuronal activity sequences, and the consolidation of memory. Inhibition may be the crucial player to make memories permanent."