The Late Effects of Stress: New Insights into How the Brain Responds to Trauma

Mrs. M would never forget that day. She was walking along a busy road next to the vegetable market when two goons zipped past on a bike. One man's hand shot out and grabbed the chain around her neck. The next instant, she had stumbled to her knees, and was dragged along in the wake of the bike. Thankfully, the chain snapped, and she got away with a mildly bruised neck. Though dazed by the incident, Mrs. M was fine until a week after the incident.

Then, the nightmares began.

She would struggle and yell and fight in her sleep every night with phantom chain snatchers. Every bout left her charged with anger and often left her depressed. The episodes continued for several months until they finally stopped. How could a single stressful event have such extended consequences?

A new study by Indian scientists has gained insights into how a single instance of severe stress can lead to delayed and long-term psychological trauma. The work pinpoints key molecular and physiological processes that could be driving changes in brain architecture.

This is a pyramidal neuron. 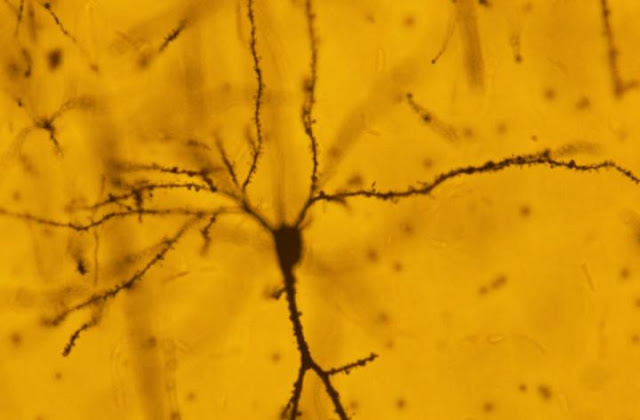 The team, led by Sumantra Chattarji from the National Centre for Biological Sciences (NCBS) and the Institute for Stem Cell Biology and Regenerative Medicine (inStem), Bangalore, have shown that a single stressful incident can lead to increased electrical activity in a brain region known as the amygdala. This activity sets in late, occurring ten days after a single stressful episode, and is dependent on a molecule known as the N-Methyl-D-Aspartate Receptor (NMDA-R), an ion channel protein on nerve cells known to be crucial for memory functions.

The amygdala is a small, almond-shaped groups of nerve cells that is located deep within the temporal lobe of the brain. This region of the brain is known to play key roles in emotional reactions, memory and making decisions. Changes in the amygdala are linked to the development of Post-Traumatic Stress Disorder (PTSD), a mental condition that develops in a delayed fashion after a harrowing experience.

Previously, Chattarji's group had shown that a single instance of acute stress had no immediate effects on the amygdala of rats. But ten days later, these animals began to show increased anxiety, and delayed changes in the architecture of their brains, especially the amygdala. "We showed that our study system is applicable to PTSD. This delayed effect after a single episode of stress was reminiscent of what happens in PTSD patients," says Chattarji. "We know that the amygdala is hyperactive in PTSD patients. But no one knows as of now, what is going on in there," he adds.

Investigations revealed major changes in the microscopic structure of the nerve cells in the amygdala. Stress seems to have caused the formation of new nerve connections called synapses in this region of the brain. However, until now, the physiological effects of these new connections were unknown.

In their recent study, Chattarji's team has established that the new nerve connections in the amygdala lead to heightened electrical activity in this region of the brain.

"Most studies on stress are done on a chronic stress paradigm with repeated stress, or with a single stress episode where changes are looked at immediately afterwards - like a day after the stress," says Farhana Yasmin, one of the Chattarji's students. "So, our work is unique in that we show a reaction to a single instance of stress, but at a delayed time point," she adds.

Furthermore, a well-known protein involved in memory and learning, called NMDA-R has been recognised as one of the agents that bring about these changes. Blocking the NMDA-R during the stressful period not only stopped the formation of new synapses, it also blocked the increase in electrical activity at these synapses. "So we have for the first time, a molecular mechanism that shows what is required for the culmination of events ten days after a single stress," says Chattarji. "In this study, we have blocked the NMDA Receptor during stress. But we would like to know if blocking the molecule after stress can also block the delayed effects of the stress. And if so, how long after the stress can we block the receptor to define a window for therapy," he adds.

Chattarji's group first began their investigations into how stress affects the amygdala and other regions of the brain around ten years ago. The work has required the team to employ an array of highly specialised and diverse procedures that range from observing behaviour to recording electrical signals from single brain cells and using an assortment of microscopy techniques. "To do this, we have needed to use a variety of techniques, for which we required collaborations with people who have expertise in such techniques," says Chattarji. "And the glue for such collaborations especially in terms of training is vital. We are very grateful to the Wadhwani Foundation that supports our collaborative efforts and to the DBT and DAE for funding this work," he adds.