The Historical Journey of Christmas Turkeys

Professor Rebecca Earle, food historian at the University of Warwick has been researching the traditional Christmas turkey, in order to find out how this north American bird has become a mainstay of festive food.

"I was talking with my sister about how to cook turkeys. ‘I have always believed turkeys should be sautéed in a small frying pan’, she opined. Whimsy aside, the best way to guard against the turkey’s proverbial dryness is to brine it. This year, of course, our access to flavourful free-range turkeys is under assault.

"The Department of Environment, Food and Rural Affairs advises that all fowl be kept indoors so they don’t catch avian flu. Turkey farmers rushed to reassure the public that there was no need to cancel Christmas—but since when did the British Christmas require a turkey in the first place? 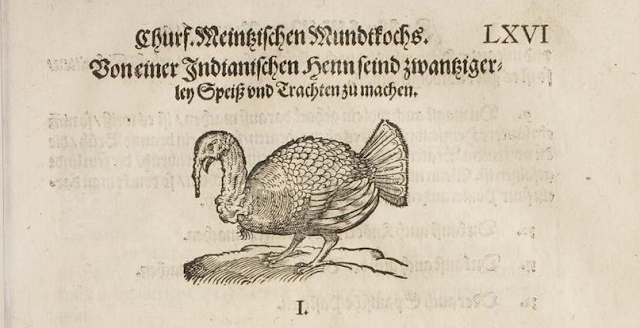 "In 1773 the genial curate and gourmande James Woodforde described the Christmas dinner he ordered at New College, Oxford: ‘two fine Codds boiled with fryed Souls [soles] around them and oyster sauce, a fine sirloin of Beef roasted, some peas soup and an orange Pudding for the first course, for the second we had a lease of Wild Ducks roasted, a fork of Lamb and salad and mince pies’. Tasty, and turkey-free. Roast turkey did not become an expected feature of (as Mrs Beeton put it) ‘a Christmas dinner with the middle classes’ until the nineteenth century. In her 1861 Book of Household Management she described flocks of several hundred turkeys being herded from Suffolk to the London market. She listed dozens of recipes, from roasts to fricassées.

"Turkeys originated in North America, where the wild birds thrived from Canada to Mexico. The Aztec emperor Moctezuma probably ate them in a stew.

"The Spanish introduced turkeys to Europe, where they spread rapidly, making it as far as Germany before the sixteenth century was out; a 1581 cookbook published in Frankfurt lists over twenty recipes for ‘Indian chicken’. Because they were so grand and festive, turkeys quickly found a place at banquets and holiday meals, including Christmas. A sixteenth century English poem describes a Christmas spread containing ‘Beefe, mutton, and porke, shred pies of the best, pig, veal, goose and capon, and turkey well drest’, along with cheese, apples, nuts and ‘good drink’.

"The demand for turkeys was such that great herds were driven from Languedoc over the Pyrenees to markets in Spain. That must have been a sight to see. Merchants in Bordeaux were shipping turkeys—stuffed with truffles—to Dublin. When bad weather delayed the crossing in 1757, the anxious turkey-seller advised the captain to wipe the birds regularly with a damp napkin to keep putrefaction at bay.

"How were all these turkeys prepared? Hannah Glasse’s bestselling eighteenth-century cookery book described how ‘to roast a turkey in the genteel way’. This entailed removing all the bones, and then stuffing the boneless bird with sausage meat, after which it was sewn back up, ‘that it may look just as it did before’. Glasse recommended serving this culinary tour-de-force with oyster or celery sauce. Or you could eat a your turkey in a pie like the one painted by Claesz.

"Glasse describes a luxurious Yorkshire Christmas pie that contains turkey, goose, chicken, partridge and pigeon, in a huge crust. She warns it will take four hours to bake. Other British recipes explain how turkey can be roasted and served with chestnuts, parsnips and sausages, boiled and served with gravy, pickled like a sturgeon, chopped into patties, stuffed ‘in the Hamburgh way’, or even, by the nineteenth century, recycled into a leftover turkey curry. But I’ve yet to find a cookbook, historic or modern, that recommends sautéeing in a small pan."

Contacts and sources:
University of Warwick
on December 24, 2016