The Australian National University (ANU) is part of an international team of astronomers that found one of the Universe's biggest superclusters of galaxies near the Milky Way.

Professor Matthew Colless from ANU said the Vela supercluster, which had previously gone undetected as it was hidden by stars and dust in the Milky Way, was a huge mass that influenced the motion of our Galaxy.

"This is one of the biggest concentrations of galaxies in the Universe - possibly the biggest in the neighbourhood of our Galaxy, but that will need to be confirmed by further study," said Professor Colless from the ANU Research School of Astronomy and Astrophysics.

he white/blue image is the Milky Way, with the central bulge on the left and the plane of the disk running horizontally across the region; the yellow/green dots are the distribution of galaxies in the nearby universe; the Vela supercluster (VSC) region is indicated, running across the Galactic plane; also shown is the location of the Shapley supercluster (SC), the other massive structure in the nearby universe. 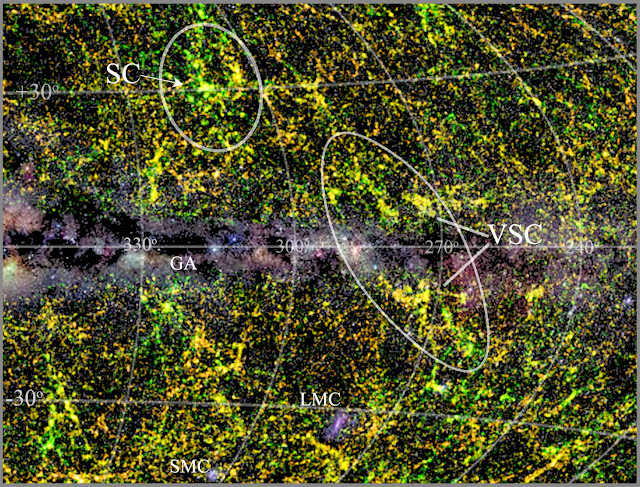 
Professor Colless used the Anglo-Australian Telescope to measure distances for many galaxies to confirm earlier predictions that Vela was a supercluster. He also helped to estimate the supercluster's effect on the motion of the Milky Way.

The research involved astronomers based in South Africa, Australia and Europe. Two new Australian surveys starting in 2017 will confirm the size of the Vela supercluster.

"The Taipan optical survey will measure galaxy distances over a bigger area around Vela, while the WALLABY radio survey will be able to peer through the densest parts of the Milky Way into the supercluster's heart," Professor Colless said.


Citation: Discovery of a supercluster in the Zone of Avoidance in VelaThe research is published in Monthly Notices of the Royal Astronomical Society. http://dx.doi.org/10.1093/mnrasl/slw229
on December 24, 2016