Scientists have witnessed the birth of atmospheric ice clouds, creating ice cloud crystals in the laboratory and then taking images of the process through a microscope, essentially documenting the very first steps of cloud formation.

The team witnessed a process known as ice nucleation in unprecedented detail, taking time-lapse movies of the first few seconds when a particle attracts water vapor, forming ice crystals that become the core of icy cirrus clouds — the high, wispy clouds that act much like a blanket for our planet.

How clouds form and what they do has a major influence on our climate and is a focus of scientists studying our planet. Clouds can reflect the sun's light, keeping the planet cool, or absorb the Earth's radiation, heating the planet. The latter is the case for ice clouds created under the conditions in this study. The complex chemistry of airborne particles that serve as the birthplace of the ice crystals adds additional challenges. 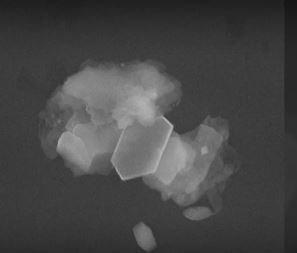 "This is one of the most critical but least understood parts of the process of how cold clouds form," said first author Bingbing Wang, a scientist formerly with EMSL, the Environmental Molecular Sciences Laboratory at the Department of Energy's Pacific Northwest National Laboratory.


"The fundamental process of how ice grows is relatively well understood, but ice nucleation — that moment when the first group of molecules comes together — remains a big challenge," said Wang, who is now a professor at Xiamen University in China.

To take a close-up look at the initial steps, Alexander Laskin, a leader of the EMSL group, brought together scientists from Stony Brook University, Lawrence Berkeley National Laboratory, and PNNL, as well as the resources of two DOE Office of Science User Facilities: EMSL and the Advanced Light Source, which is at the Berkeley Lab. The team, with Daniel Knopf leading the Stony Brook group and Mary Gilles leading the Berkeley group, describes the work in the Nov. 21 issue of Physical Chemistry Chemical Physics.

Cloud in a lab

The first step for creating a microscopic cold cloud is replicating conditions found high above the Earth's surface.

To do that, the team created a highly confined climate-controlled chamber about the size of a poppy seed where scientists regulate conditions like temperature, pressure and relative humidity precisely. The sample can then be placed inside the environmental scanning electron microscope at EMSL.

Then the team set out to re-create ice nucleation events. Almost anyone who lives in a colder climate has seen the phenomenon. It happens when water vapor from the air freezes and becomes ice quickly, for instance, when frosty streaks form on your windows during cold mornings.

The process of ice nucleation is also at play when aircraft ice up or when frozen foods are made and packaged. Aberrant ice nucleation would give your ice cream the texture of frozen ice cubes, for example.

In the atmosphere, airborne particles including those containing mineral dust, volcanic ash, carbon-based material, soot, aircraft emissions or even microbes are at the core of cloud-formation events. In this experiment scientists used particles of kaolinite, a mineral that scientists often use to study the phenomenon.

The particle's size, shape, texture and other features all play a role in how the ice crystal forms. The particles in the experiment were just two or three microns in size — less than one-tenth the width of a human hair. While many labs study ice nucleation, few start with observations about individual particles, to replicate the earliest stages of ice formation.

During the nucleation events, Laskin's team photographed the particle every three seconds, then combined the photos in several time-lapse movies. The environmental high-resolution scanning electron microscope was able to record regions on the particle only 50 nanometers wide, about one-thousandth the width of a human hair. To the untrained eye, the exercise is similar to staring out into space searching for small dots that are actually stars and planets. In the ice nucleation movies, small ice crystals barely visible at first grow as water vapor freezes onto them.

The team also used the system to watch ice nucleation happen on particles collected in the atmosphere May 19, 2010, in the CalNex 2010 field campaign. The particles, made mostly of carbon, nitrogen and oxygen, were put under observation at EMSL.

In both sets of experiments, nucleation took place at temperatures as low as 205 degrees Kelvin (around minus 90 degrees Fahrenheit) and relative humidity from about 70 to 80 percent.

"We were able to monitor moment by moment the formation of an ice crystal, at nanoscale resolution and under atmospherically relevant conditions," said co-author Daniel Knopf, an EMSL user from Stony Brook University. "Doing so and knowing that this process is replicated a million times, resulting in a cloud visible to the naked eye, is tremendously exciting and a huge step forward for our predictive understanding of cloud formation with important ramifications for climate."

The work was funded by the Department of Energy Office of Science and PNNL's Laboratory Directed Research and Development program.