Scientists Detect a Quantum Crystal of Electrons and “Watch” It Melt

For the first time, MIT physicists have observed a highly ordered crystal of electrons in a semiconducting material and documented its melting, much like ice thawing into water. The observations confirm a fundamental phase transition in quantum mechanics that was theoretically proposed more than 80 years ago but not experimentally documented until now.

The team, led by MIT professor of physics Raymond Ashoori and his postdoc Joonho Jang, used a spectroscopy technique developed in Ashoori’s group. The method relies on electron “tunneling,” a quantum mechanical process that allows researchers to inject electrons at precise energies into a system of interest — in this case, a system of electrons trapped in two dimensions. The method uses hundreds of thousands of short electrical pulses to probe a sheet of electrons in a semiconducting material cooled to extremely low temperatures, just above absolute zero.

MIT researchers believe they have finally captured the process of quantum melting — a phase transition in quantum mechanics, in which electrons that have formed a crystalline structure purely through their quantum interactions melt into a more disordered fluid, in response to quantum fluctuations to their density. 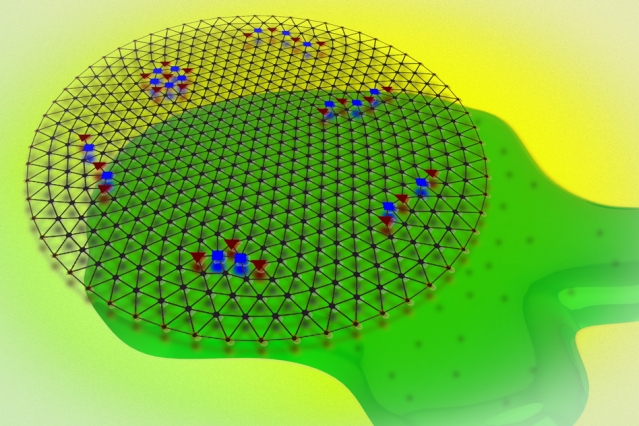 With their tunneling technique, the researchers shot electrons into the supercooled material to measure the energy states of electrons within the semiconducting sheet. Against a background blur, they detected a sharp spike in the data. After much analysis, they determined that the spike was the precise signal that would be given off from a highly ordered crystal of electrons vibrating in unison.

As the group increased the density of electrons, essentially packing them into ever tighter quarters within the sheet, they found the data spike shot up to higher energies, then disappeared entirely, precisely at an electron density at which an electronic crystal has been predicted to melt.

The researchers believe they have finally captured the process of quantum melting — a phase transition in quantum mechanics, in which electrons that have formed a crystalline structure purely through their quantum interactions melt into a more disordered fluid, in response to quantum fluctuations to their density.

“We saw something radically new,” Ashoori says. “There have been a lot of people looking for a long time to demonstrate an electronic crystal melting, and I think we’ve done it.”

Ashoori and Jang published their results last week in the journal Nature Physics. Their co-authors are former MIT postdoc Benjamin Hunt, and Loren Pfeiffer and Kenneth West of Princeton University.

The idea for a crystal of electrons was first proposed in 1934 by the Hungarian-American physicist Eugene Wigner. Normally, semiconducting metals such as silicon and aluminum are able to conduct electricity in the form of electrons that ping-pong around at lighning speeds, creating a current through the material.

However, at ultracold temperatures, electrons in these metals should grind almost to a halt, as there’s very little heat left to spur their motions. Any movements electrons do exhibit, then, should be due to quantum interactions — the invisible forces between individual electrons and other quantum, subatomic particles.

Electrons, being negatively charged, naturally repel each other. Wigner proposed that for supercooled electrons at low densities, their mutual repulsive forces should act as a sort of scaffold, holding the electrons together yet apart at equally spaced intervals, thus creating a crystal of electrons. Such a rigid arrangement, which has since been coined a Wigner crystal, should turn a metal into an insulator rather than an electrical conductor.

Through a quantum tunnel

Since Wigner’s proposal, others have tried to observe a Wigner crystal in the lab, with inconclusive results. For their part, Ashoori and Jang did not originally set out to find a Wigner crystal, but instead simply wanted to probe a two-dimensional sheet of electrons using their electron tunneling technique.

For the past decade, the group has developed and improved upon its technique, which involves shooting electrons through a barrier to probe the energy states of a material on the other side. Quantum mechanics dictates that there is a probability that any object in the universe could cross or “tunnel” through a seemingly impenetrable barrier and come out the other side unchanged.

In their experiments, the team probed a semiconducting sheet of gallium arsenide beneath a barrier of aluminum gallium arsenide. The researchers cooled the entire sample down to just a fraction above absolute zero and applied pulses of electrons at varying energies, then analyzed the resulting data.

When Jang noticed the very sharp spike in the data, he looked through previous theoretical literature to explain the feature and eventually came to the conclusion that the spike, given the temperature and electron density at which it formed, could only be a signature for a crystal of electrons vibrating in unison.

“Many of the theoretical predictions matched our observations, so that, we thought, was a smoking gun,” Jang says. “We observed the ringing of an electron crystal.”

The researchers went a step further to see what would happen if they altered the density of electrons in the two-dimensional sheet. As the density increased, the electron crystal’s vibrational energies did as well, eventually peaking, then disappearing at the exact point at which theories have predicted a crystal should melt. The crystal of electrons, the researchers surmised, must have become so dense that the entire structure crumbled into a more disordered, fluid state.

“No one’s ever looked at this system with this kind of resolution,” Ashoori says. “It was totally a serendipitous discovery.”

The team is working to improve the resolution of its electron tunneling technique even further, in hopes of using it to discern the specific shapes of electron crystals.

“Different crystals have different modes of vibrations, and if we had better resolution, we could determine if there are certain peaks in the vibration curve that signify different modes, or shapes,” Ashoori says. “There’s reason to believe we can determine that with time.”

This research was supported by the Gordon and Betty Moore Foundation and the Basic Energy Sciences program of the Office of Science of the U.S. Department of Energy.

Email ThisBlogThis!Share to TwitterShare to FacebookShare to Pinterest
Labels: Discoveres