Research Suggests Tabby’s Star Is Near A Continuous Phase Transition

In its search for extrasolar planets, the Kepler space telescope looks for stars whose light flux periodically dims, signaling the passing of an orbiting planet in front of the star. But the timing and duration of diminished light flux episodes Kepler detected coming from KIC 846852, known as Tabby’s star, are a mystery. These dimming events vary in magnitude and don’t occur at regular intervals, making an orbiting planet an unlikely explanation. The source of these unusual dimming events is the subject of intense speculation. Suggestions from astronomers, astrophysicists, and amateur stargazers have ranged from asteroid belts to alien activity.

Now a team of scientists at the University of Illinois at Urbana-Champaign—physics graduate student Mohammed Sheikh, working with Professors Karin Dahmen and Richard Weaver—proffer an entirely novel solution to the Tabby’s star puzzle. They suggest the luminosity variations may be intrinsic to the star itself. 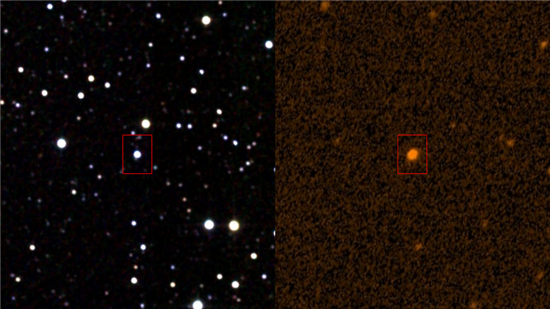 Tabby’s star is in most regards a standard F-class star, located in the constellation Cygnus, approximately 1,276 light years from Earth. Its unusual light curve—the graph of its light intensity as a function of time—shows intense dimming events of up to 20 percent, punctuated with smaller irregular dimming events.

Weaver comments, “There are a few telltale signs of occultation, or dimming by an independent body blocking the view. The most important is periodicity. In Tabby's star, the small and big events are not periodic—they don’t occur at regular intervals—and this is one of the central mysteries of the light curve. “

The Illinois team applied a statistical analysis to the light curve’s smaller irregular variations. What they found is a mathematical pattern consistent with a well-established avalanche model: the smaller dimming events are the “crackling noise” or small avalanches that are observed during the time intervals between the larger avalanches, equated to the larger dimming events. The small dimming events come in a remarkably broad range of sizes, which are distributed according to a simple scaling law. These results suggest the dimming events may be intrinsic to Tabby’s star and that the star may be near the critical point of an underlying continuous phase transition.

The location of Tabby's Star 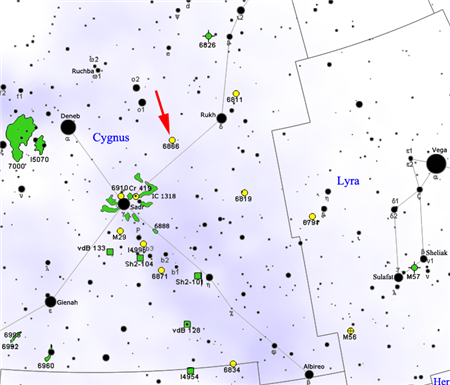 
Sheikh performed the calculations for the analysis of the observational data. He explains the mathematical method, which starts by establishing a median dimming threshold across the light curve.

Avalanches have two main properties, size and duration. The size is the total area enclosed by the light curve (underneath the threshold) and the threshold.

The avalanche size,” continues Sheikh, “is related to the net decrease in energy emitted by the star during the dimming event, when compared to a constant emission rate of the star, or the constant threshold value. The avalanche duration is the length of the event. We also look at the power spectral density, which is related to how much power per unit of frequency is contained in the light curve.

“Basically, we are looking at the statistical distributions of the fluctuations. All of these things have power laws associated with them. This gives us an independent way to interpret the events and check consistency with the model.”

Significantly, the statistics of Tabby star’s smaller dimming events are consistent with the predictions of a scaling theory. In her body of research, Dahmen has established that a small-event scaling pattern punctuated by larger events is typical of systems near a phase transition. She has seen this in the intermittent deformation dynamics of nanocrystals, the event statistics of metallic glasses, rocks, and granular materials, and in earthquakes on much larger scales spanning 12 decades in length. Similar types of avalanches are also seen in neuron firing avalanches in the brain, in magnetic systems, and in many other condensed matter systems.

“We know from other systems near nonequilibrium phase transitions that a system can have small events that show power law scaling and large events that have different dynamics,” Dahmen explains. “Examples of such transitions are magnetic systems that are slowly driven with a magnetic field, or the slow deformation of somewhat brittle materials where there is often first little crackling that gets louder and louder until there is a big snap when the material breaks.”

“The small events in our star analysis would be like the little crackles while the large events would be the analogue of the big snap,” she continues. “Our mean field model is actually able to account for both, small events and large ones. It has a built in ‘weakening’ mechanism that explains why there should be two types of avalanches.”

If the dimming events are associated with an oncoming phase transition, what would the star be transitioning toward and in what time frame? Weaver explains, “As more data is being analyzed we hope it will be possible to identify exactly what type of transition this is. We don't have a deep enough understanding to get a definitive answer, and more observations are required. We can only speculate on what such a transition would be.”

“It’s important to note—lack of periodicity alone is not enough to rule out occultation. That's part of the reason why theories such as comets or planetary debris are so popular. We can't definitely rule out these things with our findings, but we can say that the power laws we have obtained are more consistent with intrinsic variation.”

Dahmen adds, “Our work gives a framework on how to analyze the data and perhaps even to classify stars into how close or how far away the stars are from such a transition. These statistical analysis tools have been tested and successfully applied to avalanche noise in magnetic systems and plastic deformation. We are transporting these tools to astrophysics to learn more about the dynamics of stars and eventually to compare different stars.

“As a next step we believe the same type of analysis should be applied to other stars to see how universal these fluctuation statistics are among the stars that are already known. In other words we would use the statistics of the noise in the light curves in these stars to learn something about the dynamical processes that are going on inside the star.”

Contacts and sources:
Siv Schwink
University of Illinois at Urbana-Champaign

This research is published in the December 19 issue of Physical Review Letters.
on December 22, 2016