Pop-Outs: How the Brain Extracts Meaning from Noise

When you’re suddenly able to understand someone despite their thick accent, or finally make out the lyrics of a song, your brain appears to be re-tuning to recognize speech that was previously incomprehensible.

UC Berkeley neuroscientists have now observed this re-tuning in action by recording directly from the surface of a person’s brain as the words of a previously unintelligible sentence suddenly pop out after the subject is told the meaning of the garbled speech. The re-tuning takes place within a second or less, they found.

Chris Holdgraf explains how pop-outs work, and how he recorded the brain’s retuning as it tried to pull meaning out of garbled speech. Video by Roxanne Makasdjian and Steven McNally.

The observations confirm speculation that neurons in the auditory cortex that pick out aspects of sound associated with language – the components of pitch, amplitude and timing that distinguish words or smaller sound bits called phonemes – continually tune themselves to pull meaning out of a noisy environment.

“The tuning that we measured when we replayed the garbled speech emphasizes features that are present in speech,” said first author and UC Berkeley graduate student Chris Holdgraf. “We believe that this tuning shift is what helps you ‘hear’ the speech in that noisy signal. The speech sounds actually pop out from the signal.”

Such pop-outs happen all the time: when you learn to hear the words of a foreign language, for example, or latch onto a friend’s conversation in a noisy bar. Or visually, when someone points out a number in what seems like a jumbled mass of colored dots, and somehow you cannot un-see that number.

“Something is changing in the auditory cortex to emphasize anything that might be speech-like, and increasing the gain for those features, so that I actually hear that sound in the noise,” said co-author Frédéric Theunissen, a UC Berkeley professor of psychology and a member of the Helen Wills Neuroscience Institute. “It’s not like I am generating those words in my head. I really have the feeling of hearing the words in the noise with this pop-out phenomenon. It is such a mystery.”

“It is unbelievable how fast and plastic the brain is,” added co-author Robert Knight, a UC Berkeley professor of psychology and Helen Wills Institute researcher. “In seconds or less, the electrical activity in the brain changes its response properties to pull out linguistic information. Behaviorally, this is a classic phenomenon, but this is the first time we have any evidence on how it actually works in humans.”

The findings will aid Knight and his colleagues in their quest to develop a speech decoder: a device implanted in the brain that would interpret people’s imagined speech and help speechless patients, such as those paralyzed by Lou Gehrig’s disease, communicate.

Holdgraf, Knight, Theunissen and their colleagues will report their findings Dec. 20 in the journal Nature Communications.

Working with epilepsy patients who had pieces of their skull removed and electrodes placed on the brain surface to track seizures – what is known as electrocorticography – Holdgraf presented seven subjects with a simple auditory test. He first played a highly garbled sentence, which almost no one initially understood. He then played a normal, easy to understand version of the sentence, and then immediately repeated the garbled version.

Can you see the figure in this grainy photo? Click on the image to see an outline, and you’ll never be able to un-see the figure Almost everyone understood the sentence the second time around, even though they initially found it unintelligible.

The electrodes on the brain surface recorded major changes in neuronal activity before and after. When the garbled sentence was first played, activity in the auditory cortex as measured by the 468 electrodes was small. The brain could hear the sound, but couldn’t do much with it, Knight said. 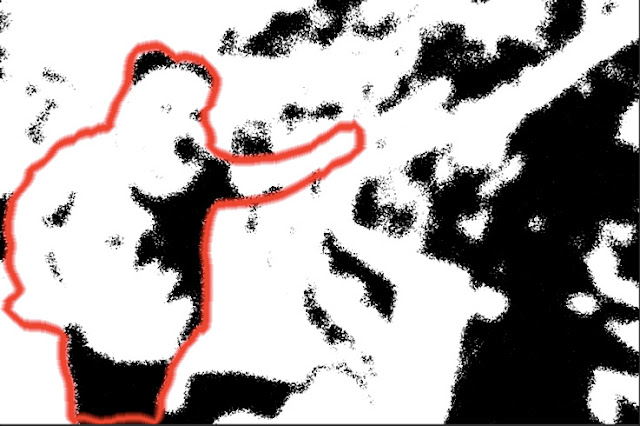 “They respond as if they were hearing unfiltered normal speech,” Holdgraf said. “It changes the pattern of activity in the brain such that there is information there that wasn’t there before. That information is this unfiltered speech.”

“Normal language activates tuning properties that are related to extraction of meaning and phonemes in the language,” Knight said. “Here, after you primed the brain with the unscrambled sentence, the tuning to the scrambled speech looked like the tuning to language, which allows the brain to extract meaning out of noise.”

This trick is a testament to the brain’s ability to automatically pick and choose information from a noisy and overwhelming environment, focusing only on what’s relevant to a situation and discarding the rest.

“Your brain tries to get around the problem of too much information by making assumptions about the world,” Holdgraf said. “It says, ‘I am going to restrict the many possible things I could pull out from an auditory stimulus so that I don’t have to do a lot of processing.’ By doing that, it is faster and expends less energy.”

That means, though, that noisy or garbled sound can be hard to interpret. Holdgraf and his colleagues showed how quickly the brain can be primed to tune in language.

The neurons from which they recorded activity were not tuned to a single frequency, like a radio, Theunissen said. Rather, neurons in the upper levels of the auditory cortex respond to more complex aspects of sound, such as changes in frequency and amplitude – spectro-temporal modulation that we perceive as pitch, timbre and rhythm. While similar studies in animals, such as ferrets, have shown that neurons change how they filter or tune into a specific type of spectro-temporal modulation, the new results are the first in humans, and show a more rapid shift to process human language than has been seen in animals, he said.

The researchers used an analysis technique first used by Theunissen to determine which complex characteristics of natural sound, like speech, neurons in the higher levels of the auditory cortex respond to, with a particular focus on songbird language. This is the first time the technique has been applied to humans to study how receptive fields change in neurons in the auditory cortex.

Co-authors of the paper are Wendy de Heer of UC Berkeley’s psychology department, postdoctoral fellows Brian Pasley and Jochem Rieger of the Helen Wills Neuroscience Institute, and neurologists Nathan Crone of Johns Hopkins School of Medicine in Baltimore, and Jack Lin of the UC Irvine Comprehensive Epilepsy Program. The work was supported by a graduate fellowship from the National Institute of Neurological Diseases and Stroke (NINDS 2R37NS021135, NIDCD R01 007293) and the Nielsen Corporation