How do you remember what happened today in the weeks and months that follow? Researchers at the Stowers Institute for Medical Research have answered a piece of that question in a recent study.

“A simple way to think about our findings is that each experience leaves a stamp in the brain,” says Kausik Si, PhD, who led the study. “We have tried to address what such a stamp could be made of and what exactly it may be doing.”

Si and colleagues performed a detailed examination of Orb2, a protein previously implicated in long-term memory formation in fruit flies, at different stages of memory. A key characteristic of Orb2 is its prion-like ability to transform from one physical state to another and form clusters, or aggregates, under certain conditions. 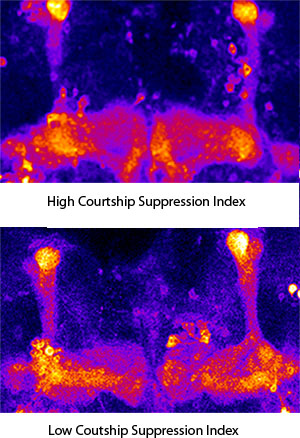 Using tools that allow rapid and reversible inactivation of Orb2 protein in neurons, the researchers found that Orb2 can act as a physical substrate for encoding memory and serve as a molecular signature for long-term memory. They also discovered that a DnaJ family chaperone, JJJ2, assists Orb2 aggregation and enhances the formation of long-term memory.

The findings were published in the December 5, 2016, issue of Current Biology and build upon earlier findings from the Si Lab that explain the molecular basis for the establishment of a memory trace.

“Using Drosophila as a model organism to study memory, we were able to exploit two different types of memories,” explains Liying Li, first author of the paper and a predoctoral researcher who is completing the research requirements for the Molecular and Integrative Physiology Graduate Program at the University of Kansas Medical Center in the Si Lab.

In these two types of memories, the researchers found three ways in which Orb2 seems to control the dynamics of memory. First, once memory is formed, it can be temporally inactivated and recover in an Orb2-dependent manner. Second, facilitation of Orb2 aggregation by the chaperone protein JJJ2 enhances the ability of fruit flies to form long-lasting memory. Finally, the amount of aggregated Orb2 predicts how stable the memory is. Together, these findings suggest that Orb2 is a constituent of a biochemical trace for memory and may help us understand what leads to loss of memory.

“Our results provide evidence that prion-like proteins play a positive role in memory formation and retention,” says Li. “Our work could potentially explain how functional, or good, protein aggregates differ from toxic aggregates. This could potentially help us find ways to regulate or control disease-forming prions.”

What underlies the making of a memory? Using molecular tools to manipulate a prion-like protein in fruit flies, researchers at the Stowers Institute for Medical Research have discovered evidence for specific molecular changes necessary for the formation, storage, and retrieval of memories.

In a study published in Current Biology, Liying Li, Kausik Si, Ph.D., and colleagues report that the protein Orb2 appears to be part of a memory stamp in the brain produced by a particular experience. The researchers also discovered that another protein, JJJ2, assists Orb2 in the formation of long-term memory. This work provides insight on how memories are made and retained in the fruit fly brain. Humans have a protein counterpart to Orb2 called CPEB, which suggests similar mechanisms may be involved in human memory.