Taking certain omega-3 fatty acid supplements during pregnancy can reduce the risk of childhood asthma by almost one third, according to a new study from the Copenhagen Prospective Studies on Asthma in Childhood (COPSAC) and the University of Waterloo.

The study, published in the New England Journal of Medicine, found that women who were prescribed 2.4 grams of long-chain omega-3 supplements during the third trimester of pregnancy reduced their children's risk of asthma by 31 per cent. Long-chain omega-3 fatty acids, which include eicosapentaenoic acid (EPA) and docosahexaenoic acid (DHA), are found in cold water fish, and key to regulating human immune response.

Professor Ken Stark taking a sample of blood in Waterloo's Laboratory of Nutritional and Nutraceutical Research to determine the levels of omega-3 fatty acids. 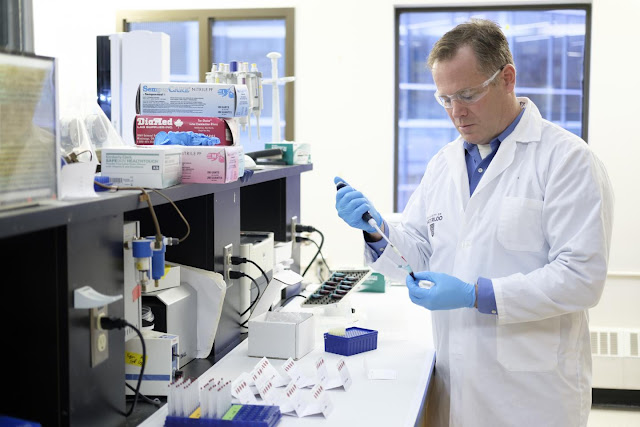 "We've long suspected there was a link between the anti-inflammatory properties of long-chain omega-3 fats, the low intakes of omega-3 in Western diets and the rising rates of childhood asthma," said Professor Hans Bisgaard of COPSAC at the Copenhagen University Hospital. "This study proves that they are definitively and significantly related."

"Measuring the levels of omega-3 fatty acids in blood provides an accurate and precise assessment of nutrient status," said Professor Ken Stark, Canada Research Chair in Nutritional Lipidomics and professor in the Faculty of Applied Health Sciences at Waterloo, who led the testing. "Our labs are uniquely equipped to measure fatty acids quickly, extremely precisely, and in a cost-efficient manner."

The testing also revealed that women with low blood levels of EPA and DHA at the beginning of the study benefitted the most from the supplements. For these women, it reduced their children's relative risk of developing asthma by 54 per cent.

"The proportion of women with low EPA and DHA in their blood is even higher in Canada and the United States as compared with Denmark. So we would expect an even greater reduction in risk among North American populations," said Professor Stark. "Identifying these women and providing them with supplements should be considered a front-line defense to reduce and prevent childhood asthma."

Researchers analyzed blood samples of 695 Danish women at 24 weeks' gestation and one week after delivery. They then monitored the health status of each participating child for five years, which is the age asthma symptoms can be clinically established.

"Asthma and wheezing disorders have more than doubled in Western countries in recent decades," said Professor Bisgaard. "We now have a preventative measure to help bring those numbers down."

Currently, one out of five young children suffer from asthma or a related disorder before school age.

Contacts and sources:
Pamela Smyth
University of Waterloo
on December 31, 2016