A sophisticated new type of “tag” on whales that can record data every second for hours, days and weeks at a time provides a view of whale behavior, biology and travels never before possible, scientists from Oregon State University reported recently in a new study.

This “Advanced Dive Behavior,” or ADB tag, has  allowed researchers to expand their knowledge of whale ecology to areas deep beneath the sea, over thousands of miles of travel, and outline their interaction with the prey they depend upon for food.

It has even turned whales into scientific colleagues to help understand ocean conditions and climate change.

The new ADB tag helps monitor the behavior of a whale. 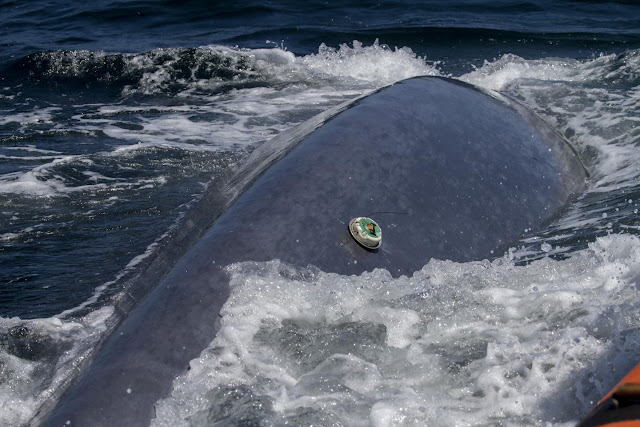 The findings, just published in the journal Ecology and Evolution, showed sperm whales diving all the way to the sea floor, more than 1000 meters deep, and being submerged for up to 75 minutes. It reported baleen whales lunging after their food; provided a basis to better understand whale reactions to undersea noises such as sonar or seismic exploration; and is helping scientists observe how whales react to changes in water temperature.

“The ADB tag is a pretty revolutionary breakthrough,” said Bruce Mate, professor and director of OSU’s Marine Mammal Institute in the College of Agricultural Sciences. “This provides us a broad picture of whale behavior and ecology that we’ve never had before.

“This technology has even made whales our partners in acquiring data to better understand ocean conditions and climate change,” Mate said. “It gives us vast amounts of new data about water temperatures through space and time, over large distances and in remote locations. We’re learning more about whales, and the whales are helping us to learn more about our own planet.”

The new tag, the researchers say, expands by several orders of magnitude the observations that can be made of whale feeding and behavior. Researchers say it’s showing what whales do while underwater; when, how and where they feed; how they might be affected by passing ships or other noises; and what types of water temperatures they prefer.

In the new study, researchers outlined the continued evolution and improvements made in the ADB technology from 2007-15, in which it was used on sperm, blue and fin whales. The research has been supported by the Office of Naval Research, the U.S. Navy and the International Association of Oil and Gas Producers.

“By using this technology on three different species, we’ve seen the full range of behavior that is specific to each species,” said Daniel Palacios, a co-author on the study. “Sperm whales, for instance, really like to dive deep, staying down a long time and appearing to forage along the seafloor at times. During summer the baleen whales will feed as much as possible in one area, and then they move on, probably after the prey density gets too low.”

This graphic shows the travel and feeding lunges of a whale off the coast of Southern California. 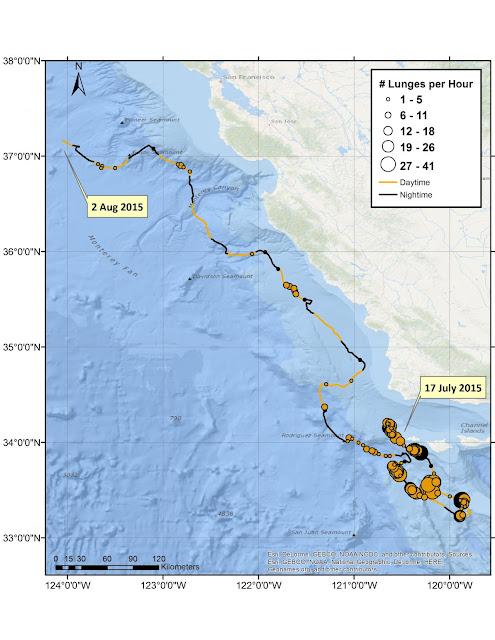 Unlike earlier technology that could not return data from the deep sea for much longer than a day, the new ADB tags are designed to acquire data constantly, for up to seven weeks at a time, before they detach from the whale, float to the surface and are retrieved in the open sea to download data. The retrieval itself is a little tricky – scientists compare it to searching for a hamburger floating in thousands of square miles of open ocean – but it has worked pretty well, thanks to the tags transmitting GPS-quality locations and flashing LED lights once they have released.

“With this system we can acquire much more data at a lower cost, with far less commitment of time by ships and personnel,” said Ladd Irvine, the corresponding author on the study. “This tag type yields amazing results. It’s going to significantly expand what we can accomplish, learning both about whale ecology and the ocean itself.”


Citation: The development of an intermediate-duration tag to characterize the diving behavior of large whales http://dx.doi.org/10.1002/ece3.2649
on December 27, 2016