Around the world, wide swaths of open ocean are nearly depleted of oxygen. Not quite dead zones, they are “oxygen minimum zones,” where a confluence of natural processes has led to extremely low concentrations of oxygen.

Only the hardiest of organisms can survive in such severe conditions, and now MIT oceanographers have found that these tough little life-forms — mostly bacteria — have a surprisingly low limit to the amount of oxygen they need to breathe.

In a paper published by the journal Limnology and Oceanography, the team reports that ocean bacteria can survive on oxygen concentrations as low as approximately 1 nanomolar per liter. To put this in perspective, that’s about 1/10,000th the minimum amount of oxygen that most small fish can tolerate and about 1/1,000th the level that scientists previously suspected for marine bacteria.

MIT oceanographers have found that some small marine organisms — mostly bacteria — have a surprisingly low limit to the amount of oxygen they need to breathe. 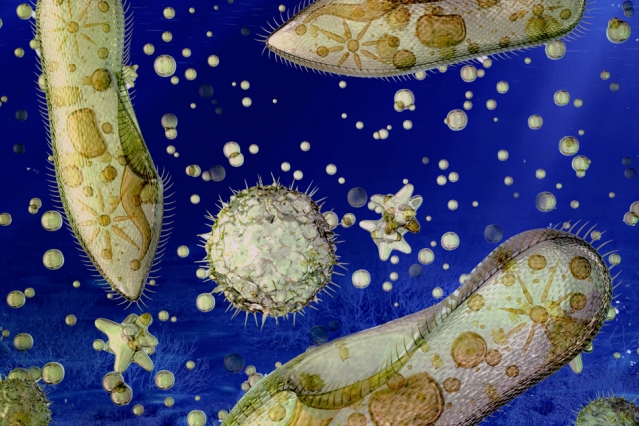 
The researchers have found that below this critical limit, microbes either die off or switch to less common, anaerobic forms of respiration, taking up nitrogen instead of oxygen to breathe.

With climate change, the oceans are projected to undergo a widespread loss of oxygen, potentially increasing the spread of oxygen minimum zones around the world. The MIT team says that knowing the minimum oxygen requirements for ocean bacteria can help scientists better predict how future deoxygenation will change the ocean’s balance of nutrients and the marine ecosystems that depend on them.

“There’s a question, as circulation and oxygen change in the ocean: Are these oxygen minimum zones going to shoal and become more shallow, and decrease the habitat for those fish near the surface?” says Emily Zakem, the paper’s lead author and a graduate student in MIT’s Department of Earth, Atmospheric and Planetary Sciences (EAPS). “Knowing this biological control on the process is really necessary to making those sorts of predictions.”

How low does oxygen go?

Oxygen minimum zones, sometimes referred to as “shadow zones,” are typically found at depths of 200 to 1,000 meters. Interestingly, these oxygen-depleted regions are often located just below a layer of high oxygen fluxes and primary productivity, where fish swimming near the surface are in contact with the oxygen-rich atmosphere. Such areas generate a huge amount of organic matter that sinks to deeper layers of the ocean, where bacteria use oxygen — far less abundant than at the surface — to consume the detritus. Without a source to replenish the oxygen supply at such depths, these zones quickly become depleted.

Other groups have recently measured oxygen concentrations in depleted zones using a highly sensitive instrument and observed, to their surprise, levels as low as a few nanomolar per liter — about 1/1,000th of what many others had previously measured — across hundreds of meters of deep ocean.

Zakem and Follows sought to identify an explanation for such low oxygen concentrations, and looked to bacteria for the answer.

“We’re trying to understand what controls big fluxes in the Earth system, like concentrations of carbon dioxide and oxygen, which set the parameters of life,” Zakem says. “Bacteria are among the organisms on Earth that are integral to setting large-scale nutrient distributions. So we came into this wanting to develop how we think of bacteria at the climate scale.”

The researchers developed a simple model to simulate how a bacterial cell grows. They focused on particularly resourceful strains that can switch between aerobic, oxygen-breathing respiration, and anaerobic, nonoxygen-based respiration. Zakem and Follows assumed that when oxygen is present, such microbes should use oxygen to breathe, as they would expend less energy to do so. When oxygen concentrations dip below a certain level, bacteria should switch over to other forms of respiration, such as using nitrogen instead of oxygen to fuel their metabolic processes.

The team used the model to identify the critical limit at which this switch occurs. If that critical oxygen concentration is the same as the lowest concentrations recently observed in the ocean, it would suggest that bacteria regulate the ocean’s lowest oxygen zones.

To identify bacteria’s critical oxygen limit, the team included in its model several key parameters that regulate a bacterial population: the size of an individual bacterial cell; the temperature of the surrounding environment; and the turnover rate of the population, or the rate at which cells grow and die. They modeled a single bacterial cell’s oxygen intake with changing parameter values and found that, regardless of the varying conditions, bacteria’s critical limit for oxygen intake centered around vanishingly small values.

“What’s interesting is, we found that across all this parameter space, the critical limit was always centered at about 1 to 10 nanomolar per liter,” Zakem says. “This is the minimum concentration for most of the realistic space you would see in the ocean. This is useful because we now think we have a good handle on how low oxygen gets in the ocean, and [we propose] that bacteria control that process.”

Looking forward, Zakem says the team’s simple bacterial model can be folded into global models of atmospheric and ocean circulation. This added nuance, she says, can help scientists better predict how changes to the world’s climate, such as widespread warming and ocean deoxygenation, may affect bacteria.

While they are the smallest organisms, bacteria can potentially have global effects, Zakem says. For instance, as more bacteria switch over to anaerobic forms of respiration in deoxygenated zones, they may consume more nitrogen and give off as a byproduct nitrogen dioxide, which can be released back into the atmosphere as a potent greenhouse gas.

“We can think of this switch in bacteria as setting the ocean’s fertility,” Zakem says. “When nitrogen is lost from the ocean, you’re losing accessible nutrients back into the atmosphere. To know how much denitrification and nitrogen dioxide flux will change in the future, we absolutely need to know what controls that switch from using oxygen to using nitrogen. In that regard, this work is very fundamental.”

This research was supported, in part, by the Gordon and Betty Moore Foundation, the Simons Foundation, NASA, and the National Science Foundation.