Marmok-5, a new device using wave-powered turbines to generate up to 30kW of electricity, has recently been deployed at the BiMEP site, on the northern coast of Spain. The device produces enough energy to run a medium-sized business.

Built as part of the Horizon 2020-funded OPERA project, Marmok-5 has been manufactured at Navacel’s installations in Erandio, Spain, since August 2016. Deployment has started in October and a second, 12-month deployment phase is scheduled for 2017.

Europe is endowed with abundant wave energy which could cover some 10% of its electricity needs with a clean, predictable and job-creating resource, which EU companies are at the forefront exploiting with little dependence on foreign suppliers.

There remain important technical challenges to bring down costs to within investors’ reach, as a top priority open-sea operating experience must be analysed to permit the focus of R&D efforts on identifying and solving problems uncovered in open-sea deployments. However, to this day, most wave energy R&D does not have access to open-sea operating data as they are not shared by the companies that sponsored open-sea tests.

OPERA will remove this roadblock by collecting and sharing two years of open-sea operating data of a floating oscillating water column wave energy converter. In addition the project will be the first open-sea deployment for four cost-reducing innovations that will be advanced from TRL3-4 to TRL5. Together, these four innovations have a long-term cost reduction potential of over 50%. These are: a 50% more efficient turbine, latching and predictive control, a shared mooring system for wave energy similar to those that have reduced mooring costs 50% in aquaculture, and an elastomeric mooring tether that reduces peak loads at the hull-mooring connection 70% and thus addresses one of the most pressing challenges for structural survivability of wave energy devices.
TRIAXYS Directional Wave Buoy from Canadian manufacturer AXYS Technologies was deployed at BiMEP open-sea test site, just in front of OCEANTEC’s MARMOK wave energy device, which is now injecting energy into the Spanish grid 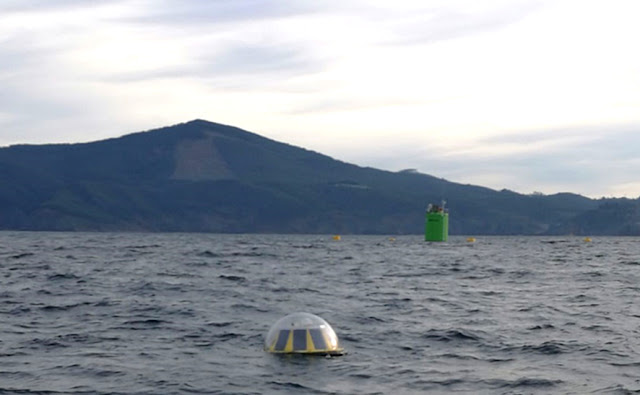 
The device is described by its designers as a point absorber based on the Oscillating Water Column (OWC) principle. It is a large floating buoy of 5 metres in diameter, 42 metres in length and 80 tonnes weight. It comprises two turbines with a rated capacity of 30 kW and is almost entirely submerged. The electricity is generated thanks to wave-enabled rotation of the turbines: Captured waves create a water column inside the central structure of the buoy, which is itself driven like a piston by the to-and-fro movement of the waves that compress and decompress the air in a chamber at the top of the device. The air is then expelled out the top where it is harnessed by one or more turbines, whose rotation drives the electricity generator.

‘This collaborative European wave energy demonstration project will generate important data, that will enable the next phase towards commercialisation of energy generation from the ocean,’ said Lars Johanning, Principle investigator for the project and expert in Ocean Technology at the University of Exeter’s Penryn Campus in Cornwall. ‘It joins novel ideas to address critical design criteria allowing the economic realisation of energy generation from waves.’ 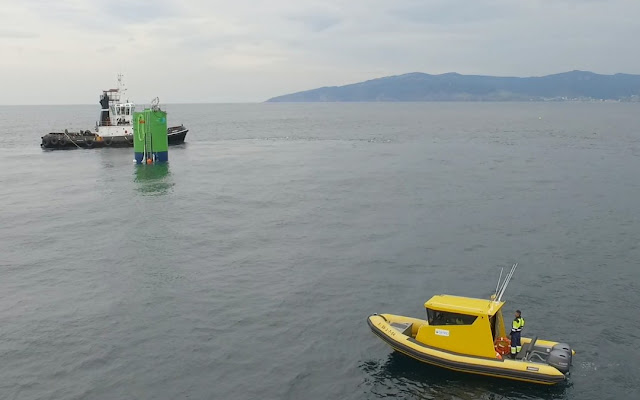 
Even though Europe is a world leader in this field, wave-energy costs are still very high compared to other forms of energy. A lack of open-sea experiments – and the fact that existing one are often privately-sponsored – has thus far prevented engineers from fully understanding challenges related to device performance, survivability and reliability. With Marmok-5, the wave energy development community will finally be able to access first-hand, high-quality open-sea operating data.

The final part of Marmok-5’s installation process, which took place in November, consisted in adding a mooring load measurement unit that will provide a data link to monitor extreme conditions at the site. This additional system will provide high resolution measurement of mooring tensions and device motions, will also enable a greater understanding of operational and extreme conditions at other energetic wave energy sites.

The consortium intends to pursue its work in 2017. A second 12 month deployment phase is scheduled, and polyester ropes currently used in the mooring system will be replaced with a novel elastomeric mooring tether developed by the University of Exeter.

All in all, OPERA intends to develop technology enabling a 50% reduction in offshore operating costs, thus accelerating the establishment of international standards and reducing technological uncertainties and technical and business risks.