Researchers of Karlsruhe Institute of Technology (KIT) and Universität Hannover developed novel membranes, whose selectivity can be switched dynamically with the help of light. For this purpose, azobenzene molecules were integrated into membranes made of metal-organic frameworks (MOFs). Depending on the irradiation wavelength, these azobenzene units in the MOFs adopt a stretched or angular form. In this way, it is possible to dynamically adjust the permeability of the membrane and the separation factor of gases or liquids.

A MOF membrane with integrated photoswitches separates molecules. The sepa-ration factor can be tuned dynamically by light irradiation. 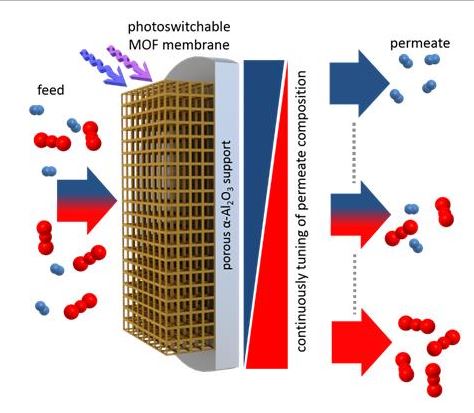 Metal-organic frameworks, MOFs for short, are highly porous crystalline materials, consisting of metallic nodes and organic linkers. They can be tailored to many different applications. Among others, they have an enormous potential as membranes for efficient separation of molecules according to various parameters. By modifying pore sizes and chemical properties of the pore walls, static selectiv-ity of the membranes can be adapted to the respective requirements. In Nature Communications the scientists for the first time present membranes, whose selectivities can be tuned dynamically. This is done remotely with the help of light.

Azobenzene molecules are used as remote-controlled photoswitch-es. They consist of two phenyl rings each, which are linked by a nitrogen double bond. Two different configurations exist: A stretched trans-configuration and an angular cis-configuration. Irradiation with light causes the molecule to reposition. Under visible light the molecule stretches, under UV light it bends. Repositioning is reversible, can be repeated as often as desired, and does not affect the crystalline structure of the MOFs.

Precise control of the ratio between cis- and trans-azobenzene by e.g. a precisely adjusted irradiation time or simultaneous irradiation with UV light and visible light enables dynamic tuning of membrane permeability and of separation efficiency of gaseous or liquid sub-stance mixtures. “Control of these important properties by external stimuli, i.e. without having direct contact with the membrane, is a real breakthrough in membrane technology “, says Dr. Lars Heinke, Head of the IFG Group ”Dynamic Processes in Porous Systems.“

Functioning of the novel smart membranes was demonstrated by the separation of a hydrogen-carbon dioxide gas mixture. The scientists succeeded in dynamically tuning the separation factor be-tween three and eight. The concept is also suited for separating other gas mixtures, such as nitrogen-carbon dioxide mixtures. It might also be feasible to use MOF membranes with photoswitches to control accessibility of catalyst or sensor surfaces or release of encapsulated medical substances.