Researchers have found evidence that could shed new light on the complex community of trillions of microorganisms living in all our guts, and how they interact with our bodies.

Scientists at the University of Exeter Medical School and University of Zaragoza in Spain studied a protein known as TLR2, a critical detector of the microbiota found in the intestine. They found that it regulates levels of serotonin - a neurotransmitter which carries messages to the brain, and is also found in the gut, where it regulates our bowel routines. 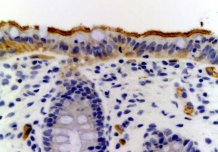 
The finding, published in PLOS ONE, comes as scientists across the world are working to understand the complicated interactions between the "invisible world" of the microbiota in our bodies and the impact they have on our health and even our moods. Recently, scientists in California found evidence that the bacteria in the gut play a role in causing Parkinson's Disease.

It may also help explain how the microbiota in our guts affect our physiology. Inflammatory bowel disease is thought to be triggered when TLR2 is not functioning properly, but so far, the mechanisms behind this have not been fully understood. This study aimed to further this understanding, and was supported the Foundation for the Study of Inflammatory Bowel Diseases in Aragón (ARAINF), in Spain.

Dr Eva Latorre, a postdoctoral researcher at the University of Exeter Medical School, said the new finding helped to further understanding in a fast-growing research area. She said: "This paper has concluded that the protein TLR2 alters the availability of serotonin, which is important in a range of conditions from depression to inflammatory bowel disease. It is early days in this research though. We need to understand much more about the relationship between the microbiota in our guts and how they interact, before we can hope to harness effective new treatments."

The research team examined human cells in a model of the intestine in the laboratory, looking at how they express proteins and RNA - activities which regulate how they behave. They found that TLR2 controls serotonin transporter - obtaining the same result in studies on mice.

Principal investigator of this study, Professor José E Mesonero, at the University of Zaragoza, said: "This paper opens our minds about the complex universe of this forgotten organ: the microbiome. We have concluded that TLR2 not only can detect microbiota, but also modulate serotonin transport, one of the crucial mechanism in neurological and inflammatory diseases. Much has to be yet studied, but this work can improve our understanding about the connection between gut and brain thought microbiota."