Why does a 30-year-old hit their foot against the curb in the parking lot and take a half step and recover, whereas a 71-year-old falls and an 82-year-old falls awkwardly and fractures their hip?” asks James Richardson, M.D., professor of physical medicine and rehabilitation at the University of Michigan Comprehensive Musculoskeletal Center.

For the last several years, Richardson and his team set out to answer these questions, attempting to find which specific factors determine whether, and why, an older person successfully recovers from a trip or stumble. All this in an effort to help prevent the serious injuries, disability, and even death, that too often follow accidental falls.

“Falls research has been sort of stuck, with investigators re-massaging over 100 identified fall ‘risk factors,’ many of which are repetitive and circular,” Richardson explains. “For example, a 2014 review lists the following three leading risk factors for falls: poor gait/balance, taking a large number of prescription medications and having a history of a fall in the prior year.”

Richardson continues, “If engineers were asked why a specific class of boat sank frequently and the answer came back: poor flotation and navigational ability, history of sinking in the prior year and the captain took drugs, we would fire the engineers! Our goal has been to develop an understanding of the specific, discrete characteristics that are responsible for success after a trip or stumble while walking, and to make those characteristics measurable in the clinic.”

Richardson’s latest research finds that it’s not only risk factors like lower limb strength and precise perception of the limb’s position that determine if a geriatric patient will recover from a perturbation, but also complex and simple reaction times, or as he prefers to refer to it, a person’s “brain speed.” The work is published in the January 2017 edition of the American Journal of Physical Medicine & Rehabilitation.

“Our study wanted to identify relationships between complex and simple clinical measures of reaction time and indicators of balance in elderly subjects with diabetic peripheral neuropathy, nerve damage that can occur in those with diabetes,” Richardson says.

“These patients fall twice as often as people their age typically do, so we wanted to examine each person’s ability to make a decision in less than half a second, or around 400 milliseconds. Importantly, this is also about the length of time the foot is in the air before landing while walking, and about the time available to recover from a stumble or trip.”

He realized they needed a new, easy way to measure that rapid decision-making ability.

Using a device developed with U-M co-inventors James T. Eckner, Hogene Kim and James A. Ashton-Miller, simple reaction time is measured much like a drop-ruler test used in many school science classes, but is a bit more standardized.

“The clinical reaction time assessment device consists of a long, lightweight stick attached to a rectangular box at one end. The box serves as a finger spacer to standardize initial hand position and finger closure distance, as well as a housing for the electronic components of the device,” Richardson says. 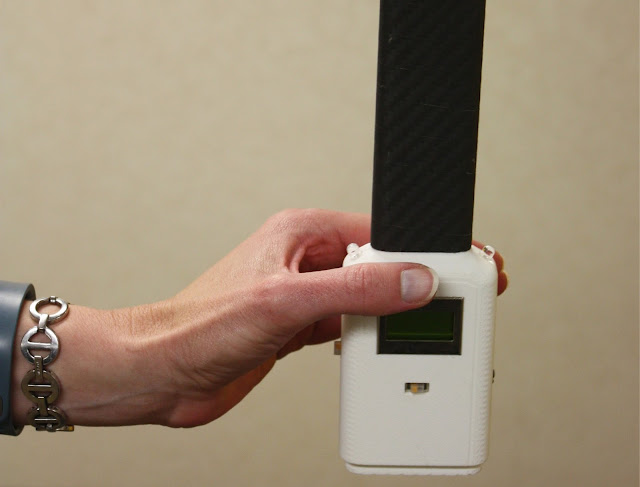 To measure simple reaction time, the patient or subject sits with the forearm resting on a desk with the hand off the edge of the surface. The examiner stands and suspends the device with the box hanging between the subject’s thumb and other fingers and lets the device drop at varying intervals. The subject catches it as quickly as possible and the device provides a display of the elapsed time between drop and catch, which serves as a measurement of simple reaction time.

Although measuring simple reaction time is useful, Richardson says that the complex reaction time accuracy has been more revealing. The initial set up of the device and subject is the same. However, in this instance, the subject’s task is to catch the falling device only during the random 50 percent of trials where lights attached to the box illuminate at the moment the device is dropped, and to resist catching it when the lights do not illuminate.

“Resisting catching when the lights don’t go off is the hard part,” Richardson says. “We all want to catch something that is falling. The subject must perceive light illumination status and then act very quickly to withhold the natural tendency to catch a falling object.”

In the study, Richardson and team used the device with a sample of 42 subjects, 26 with diabetic neuropathy and 16 without, with an average age of 69.1 years old, to examine their complex reaction time accuracy and their simple reaction time latency, in addition to the usual measures of leg strength and perception of motion.

They then looked to see how well these measures predicted one-legged balance time, the ability to control step width when walking on a hazardous uneven surface in the research lab and major fall-related injuries over the next 12 months.

In the subjects with diabetic peripheral neuropathy, good complex reaction time accuracy and quick simple reaction time were strongly associated with a longer one-legged balance time, and were the only predictors of good control of step width on the uneven surface. In addition, they appeared to identify those who sustained major fall-related injury during the one-year follow up. Surprisingly, the measures of leg strength and motion perception had no influence on step width control on the hazardous surface and did not appear to predict major injury.

“Essentially we found that those who were able to grab the device quickly, or quickly make the decision to let it drop, had quick brains that were somehow helping them stay balanced and avoid aberrant steps on the uneven surface,” Richardson says.

He explains that the ability to avoid aberrant steps after hitting a bump while walking, and stay balanced while performing the trials, were likely based on the participant’s brain processing speed. In particular, the ability to quickly withhold, or inhibit, a planned movement is required for good complex reaction accuracy and responding to a perturbation while walking. In both cases, the original plan of action must be aborted and a new one substituted within approximately a 400 milliseconds time interval.

“With this in mind, it makes perfect sense that brains fast enough to have good complex reaction time accuracy were also fast enough to quickly pay attention to the perturbation while walking, inhibit the step that was planned and quickly execute a safer alternative,” Richardson says. “The faster your brain can oscillate between various external stimuli, or events, and your own internal thinking clutter, the better off you are. When an elderly person falls, it seems likely that their brain is not keeping up with what is happening and so it is not able to quickly, and selectively, attend to a particular stimulus, such as hitting a curb.”

Richardson says this assessment, which cannot be produced from a computer or pen/pencil tests, could be valuable to other health care providers, such as primary care physicians, neurologists, geriatricians and a variety of rehabilitation professionals.