Using ultrafast imaging of moving energy in photosynthesis, scientists have determined the speed of crucial processes for the first time.

This should help scientists understand how nature has perfected the process of photosynthesis, and how this might be copied to produce fuels by artificial photosynthesis.

During photosynthesis, plants harvest light and, though a chemical process involving water and carbon dioxide, convert this into fuel for life.

This is a rotating view of a 'time-zero' population of excited pigments (under particular excitation direction).

A vital part of this process is using the light energy to split water into oxygen and hydrogen. This is done by an enzyme called Photosystem II. Light energy is harvested by 'antennae', and transferred to the reaction centre of Photosystem II, which strips electrons from water. This conversion of excitation energy into chemical energy, known as 'charge separation', is the first step in splitting water.

It was previously thought that the process of charge separation in the reaction centre was a 'bottleneck' in photosynthesis - the slowest step in the process - rather than the transfer of energy along the antennae.

Since the structure of Photosystem II was first determined 2001, there was some suggestion that in fact it could be the energy transfer step that was slowest, but it was not yet possible to prove experimentally. 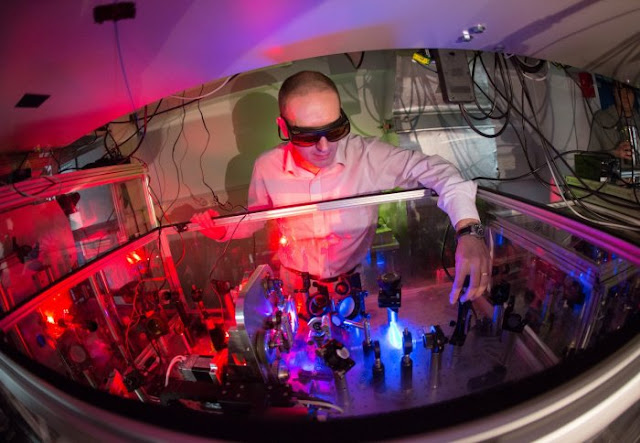 Now, using ultrafast imaging of electronic excitations that uses small crystals of Photosystem II, scientists from Imperial College London and Johannes Kepler University (JKU) in Austria have shown that the slowest step is in fact the process through which the plants harvest light and transfer its energy through the antennae to the reaction centre.

The new insights into the precise mechanics of photosynthesis should help researchers hoping to copy the efficiency of natural photosynthesis to produce green fuels. Study author Dr Jasper van Thor, from the Department of Life Sciences at Imperial, said: "We can now see how nature has optimised the physics of converting light energy to fuel, and can probe this process using our new technique of ultrafast crystal measurements.

"For example, is it important that the bottleneck occurs at this stage, in order to preserve overall efficiency? Can we mimic it or tune it to make artificial photosynthesis more efficient? These questions, and many others, can now be explored."


This is a representation of energy redistribution in space (single pigment basis) and time (femtosecond to nanosecond). The left and right compare the different initial distributions that can be created.

Co-author Dr Thomas Renger from the Department of Theoretical Biophysics at JKU added: "When we predicted the present model of energy transfer eight years ago, this prediction was based on a structure-based calculation. Since such calculations are far from trivial for a system as complex as this, some doubts remained. The technique invented by Jasper's group at Imperial has allowed us to remove these doubts and has fully confirmed our predictions."

Although the researchers could determine which step is faster, both steps occur incredibly quickly - the whole process takes a matter of nanoseconds (billionths of a second), with the individual steps of energy transfer and charge separation taking only picoseconds (trillionths of a second).

The team used a sophisticated system of lasers to cause reactions in crystals of Photosystem II, and then to measure in space and time the movement of excitations of electrons - and hence the transfer of energy - across the antennae and reaction centre.

The resulting movie of the movement of excited electrons across minute sections of the system revealed where energy is held and when it is passed along. This proved that the initial step of separating charges for the water-splitting reaction takes place relatively quickly, but that the light harvesting and transfer process is slower.

Dr van Thor added: "There had been clues that the earlier models of the bottleneck of photosynthesis were incorrect, but until now we had no direct experimental proof. We can now show that what I was lectured as an undergraduate in the 1990s is no longer supported."