The sheer observing power of the NASA/ESA Hubble Space Telescope is rarely better illustrated than in an image such as this. This glowing pink nebula, named NGC 248, is located in the Small Magellanic Cloud, just under 200 000 light-years away and yet can still be seen in great detail.

Our home galaxy, the Milky Way, is part of a collection of galaxies known as the Local Group. Along with the Andromeda Galaxy, the Milky Way is one of the Group’s most massive members, around which many smaller satellite galaxies orbit. The Magellanic Clouds are famous examples, which can easily be seen with the naked eye from the southern hemisphere.

This glowing nebula, named NGC 248, is located within the Small Magellanic Cloud, a satellite galaxy of the Milky Way and about 200 000 light-years from Earth. The nebula was observed with Hubble’s Advanced Camera for Surveys in September 2015, as part of a survey called the Small Magellanic cloud Investigation of Dust and Gas Evolution (SMIDGE). 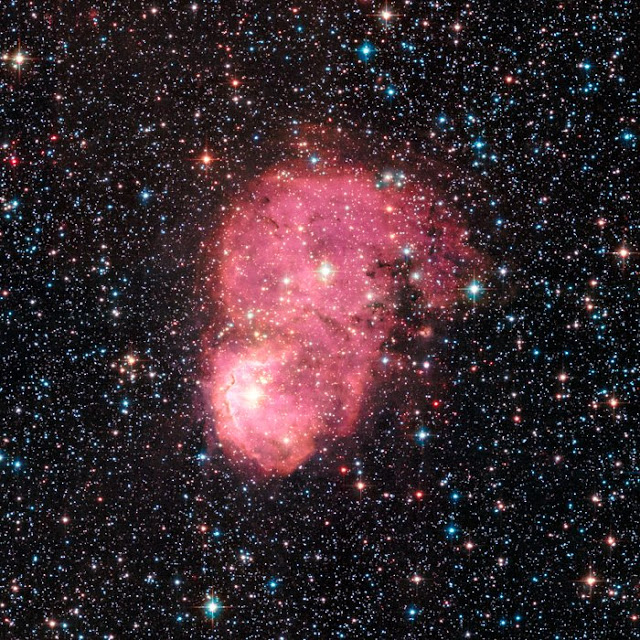 Within the smaller of these satellite galaxies, the Small Magellanic Cloud, the NASA/ESA Hubble Space Telescope captured two festive-looking emission nebulae, conjoined so they appear as one. Intense radiation from the brilliant central stars is causing hydrogen in the nebulae to glow pink.

Together the nebulae are called NGC 248. They were discovered in 1834 by the astronomer Sir John Herschel. NGC 248 is about 60 light-years long and 20 light-years wide. It is among a number of glowing hydrogen nebulae in the Small Magellanic Cloud, which lies in the southern constellation of Tucana (The Toucan), about 200 000 light-years away.

This photo was taken by the Japanese astrophotographer Akira Fujii and shows a wide-angle view of the globular cluster 47 Tucanae and the Small Magellanic Cloud. 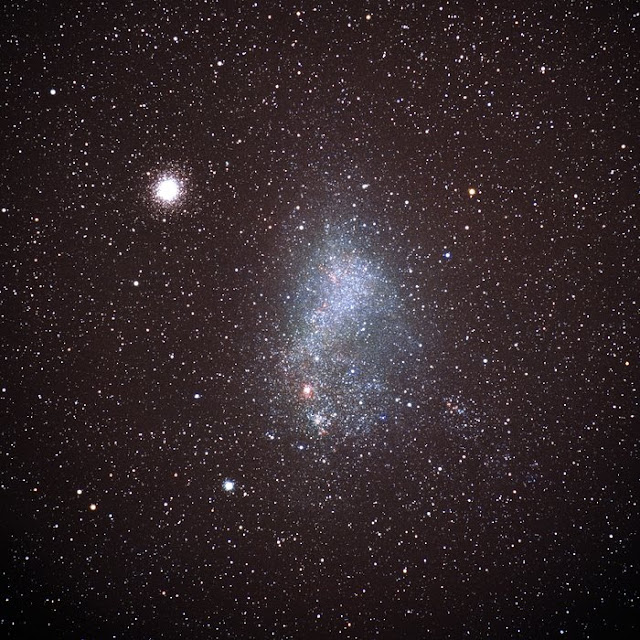 The nebula was observed as part of a Hubble survey, the Small Magellanic cloud Investigation of Dust and Gas Evolution (SMIDGE). In this survey astronomers are using Hubble to probe the Small Magellanic Cloud to understand how its dust — an important component of many galaxies and related to star formation — is different from the dust in the Milky Way.

This zoom video starts with a wide-field view of both the Small and the Large Magellanic Clouds before zooming into the emission nebula NGC 248, located on the southern end of the Small Magellanic Cloud, as it is seen with the NASA/ESA Hubble Space Telescope.

Thanks to its relative proximity, the Small Magellanic Cloud is a valuable target. It also turns out to have only between a fifth and a tenth of the amount of heavy elements that the Milky Way has, making the dust similar to what we expect to see in galaxies in the earlier Universe.

This allows astronomers to use it as a cosmic laboratory to study the history of the Universe in our cosmic backyard. These observations also help us to understand the history of our own galaxy as most of the star formation happened earlier in the Universe, at a time when the percentage of heavy elements in the Milky Way was much lower than it is now.

The data used in this image were taken with Hubble’s Advanced Camera for Surveys in September 2015.