Deep down in the Earth’s core a massive river of molten iron is moving westward under Alaska and Siberia with increasing speed. The remarkable movement have been detected with data from the European Swarm satellites.

Scientists have made a remarkable discovery deep down in the interior of the Earth. A fast flowing river of molten iron nearly as hot as the sun's surface has been uncovered some 3.000 km beneath the surface of the Earth. It’s surrounded by other molten material but flows much faster.

One can imagine it as a large rug extending halfway around the Earth. It is 420 km wide, 7,000 km long and probably stretches some 5,000 kilometers into the deep. It moves westward under Siberia and Alaska with a speed of 45 km per year or some 5 meter per hour.

Swarm’s three satellites provide a high-resolution picture of the Earth’s magnetic field at the core. With Swarm it is able to ‘see’ through the 3,000 kilometres of rock to the molten outer iron core below and track and describe a high latitude jet-stream as it speeds up moving westward under Alaska and Siberia. 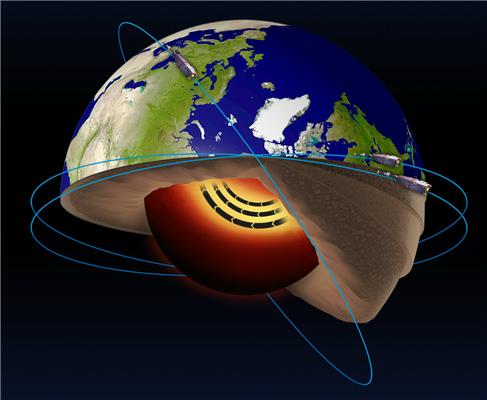 The new discovery has been made by means of very precise measurements of the Earth magnetic field with the Swarm satellites sent into orbit in 2013 by the European Space Agency, ESA.

The scientists call the molten iron river a ‘jet-stream’ comparing it to the atmospheric jet-stream at high altitude where a belt of fast flowing air gives tailwind to airplanes and makes them move faster. Here it takes place in the melting pot of liquid iron in the Earth’s outer core.

“It’s a very fascinating discovery. This is the first time we see this jet-stream so clearly,” said Chris Finlay, Swarm project scientist and senior scientist at DTU Space at Denmark’s Technical University in Copenhagen.

THE SPEED HAS TRIPLED IN 15 YEARS

The work has been conducted in close cooperation between scientists at DTU Space and University of Leeds. The results have been published recently in the reputed journal Nature Geoscience.

“We’ve not only seen this, we think we can explain what it is – an acceleration in a band of fluid flow circling the pole like the jet-stream does in the atmosphere,” said Dr. Phil Livermore of the University of Leeds, lead author of the paper in Nature Geoscience.

The jet-streams speed has tripled over the last 15 years. Exactly what drives the motion is not known. But it is likely generated from changes in the magnetic field within the core.

"45 km a year may not sound like much. But it is the fastest we have seen something move in the Earth's interior and three times faster than anything else in the Earth core," said Chris Finlay.

Swarm’s mission is to track and study the Earth’s magnetic field with unprecedented precision and resolution.

The magnetic field shields us from damaging radiation from Space and it impacts on navigation systems on Earth. It’s forever changing and hence important to study.

The Swarm mission consist of three satellites. Two of them – Alpha and Charlie - fly in tandem at about 450 km from Earth and descends over time. The third, Bravo, is in orbit 500 km from earth and slightly drifts away from the two others in its orbital plane. The unique constellation allows effects of magnetic sources external to the Earth to be stripped away, making the signal from the core much clearer.

“This feature, the jet-stream, is one of the first deep-Earth discoveries made possible by Swarm. It’s a very exciting time,” said Swarm mission manager Rune Floberghagen from ESA.

“With the unprecedented resolution now possible, we simply don’t know what we’ll discover next about our planet and its environment”.

The earth is about 12,700 km in diameter. The outer liquid core starts about 2,900 km beneath the surface and reaches to 5,100 km. The inner solid core reaches from 5,100 km to the center of Earth. The Earth’s magnetic field is mainly created by a giant dynamo in the molten outer core.