Driverless Platoons: Autonomous Trucks Traveling In Packs Could Save Time And Fuel

As driverless cars merge into our transportation system in the coming years, some researchers believe autonomous vehicles may save fuel by trailing each other in large platoons. Like birds and fighter jets flying in formation, or bikers and race car drivers drafting in packs, vehicles experience less aerodynamic drag when they drive close together.

But assembling a vehicle platoon to deliver packages between distribution centers, or to transport passengers between stations, requires time. The first vehicle to arrive at a station must wait for others to show up before they can all leave as a platoon, creating inevitable delays.

Now MIT engineers have studied a simple vehicle-platooning scenario and determined the best ways to deploy vehicles in order to save fuel and minimize delays. Their analysis, presented this week at the International Workshop on the Algorithmic Foundations of Robotics, shows that relatively simple, straightforward schedules may be the optimal approach for saving fuel and minimizing delays for autonomous vehicle fleets. The findings may also apply to conventional long-distance trucking and even ride-sharing services.

MIT engineers have studied a simple vehicle-platooning scenario and determined the best ways to deploy vehicles in order to save fuel and minimize delays. 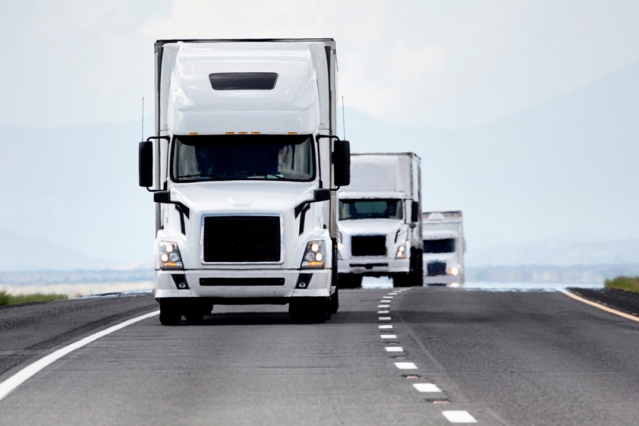 “Ride-sharing and truck platooning, and even flocking birds and formation flight, are similar problems from a systems point of view,” says Sertac Karaman, the Class of 1948 Career Development Associate Professor of Aeronautics and Astronautics

at MIT. “People who study these systems only look at efficiency metrics like delay and throughput. We look at those same metrics, versus sustainability such as cost, energy, and environmental impact. This line of research might really turn transportation on its head.”

Karaman says that for truck-driving — particularly over long distances — most of a truck’s fuel is spent on trying to overcome aerodynamic drag, that is, to push the truck through the surrounding air. Scientists have previously calculated that if several trucks were to drive just a few meters apart, one behind the other, those in the middle should experience less drag, saving fuel by as much as 20 percent, while the last truck should save 15 percent — slightly less, due to air currents that drag behind.

If more vehicles are added to a platoon, more energy can collectively be saved. But there is a cost in terms of the time it takes to assemble a platoon.

Karaman and his colleagues developed a mathematical model to study the effects of different scheduling policies on fuel consumption and delays. They modeled a simple scenario in which multiple trucks travel between two stations, arriving at each station at random times. The model includes two main components: a formula to represent vehicle arrival times, and another to predict the energy consumption of a vehicle platoon.

“I grew up in Turkey, where there are two types of public transportation buses: normal buses that go out at certain time units, and another set where the driver will sit there until the bus is full, and then will go,” Karaman says.

When to stay, when to go

In their modeling of vehicle platooning, the researchers analyzed many different scenarios under the two main scheduling policies. For example, to evaluate the effects of time-table scheduling, they modeled scenarios in which platoons were sent out at regular intervals — for instance, every five minutes — versus over more staggered intervals, such as every three and seven minutes. Under the feedback policy, they compared scenarios in which platoons were deployed once a certain number of trucks reached a station, versus sending three trucks out one time, then five trucks out the next time.

Ultimately, the team found the simplest policies incurred the least delays while saving the most fuel. That is, time tables set to deploy platoons at regular intervals were more sustainable and efficient than those that deployed at more staggered times. Similarly, feedback scenarios that waited for the same number of trucks before deploying every time were more optimal than those that varied the number of trucks in a platoon.

“You’d think a more complicated scheme would save more energy and time,” Karaman says. “But we show in a formal proof that in the long run, it’s the simpler policies that help you.”

Ahead of the game

Karaman is currently working with trucking companies in Brazil that are interested in using the group’s model to determine how to deploy truck platoons to save fuel. He hopes to use data from these companies on when trucks enter highways to compute delay and energy tradeoffs with his mathematical model.

Eventually, he says, the model may suggest that trucks follow each other at very close range, within 3 to 4 meters, which is difficult for a driver to maintain. Ultimately, Karaman says, truck platoons may require autonomous driving systems to kick in during long stretches of driving, to keep the platoon close enough together to save the most fuel.

“There are already experimental trials testing autonomous trucks [in Europe],” Karaman says. “I imagine truck platooning is something we might see early in the [autonomous transportation] game.”

The researchers are also applying their simulations to autonomous ride-sharing services. Karaman envisions a system of driverless shuttles that transport passengers between stations, at rates and times that depend on the overall system’s energy capacity and schedule requirements. The team’s simulations could determine, for instance, the optimal number of passengers per shuttle in order to save fuel or prevent gridlock.

“We believe that ultimately this thinking will allow us to build new transportation systems in which the cost of transportation will be reduced substantially,” Karaman says.

This research was funded, in part, by the National Science Foundation.