Physicists from the Lomonosov Moscow State University have obtained diamond crystals in the form of a regular pyramid of micrometer size. Moreover, in cooperation with co-workers from other Russian and foreign research centers they have also studied the luminescence and electron emission properties of obtained diamond crystals. The research results have been represented in a serie of articles published in the leading peer review journals, the most recent appeared in Scientific Reports.

Researchers from the Faculty of Physics, the Lomonosov Moscow State University, have described structural peculiarities of micrometer size diamond crystals of needle- and thread-like shapes, and their interrelation with luminescence features and efficiency of field electron emission. The luminescence properties of such thread-like diamond crystals could be used in different types of sensors, quantum optical devices and also for creation of element base for quantum computers and in other areas of science and technology.

Example of diamond crystallites of different shapes, obtained with the help of the technology, worked out in the Lomonosov Moscow State University. There are electron microscopy images of diamond films' fragments after their oxidation in the air. The material left after the oxidation is represented by needle-like diamond monocrystals of pyramid shape. 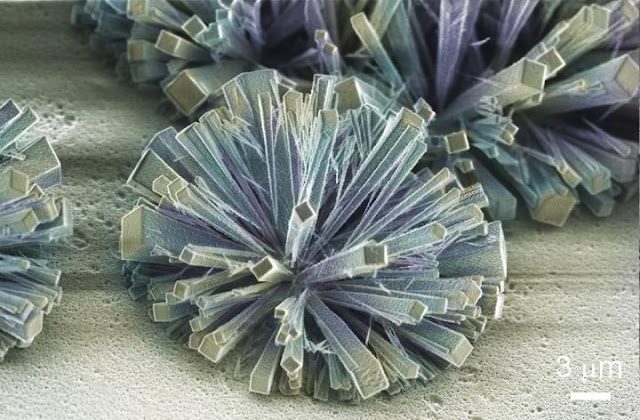 
The best friends of girls and technologists

Brilliants are polished rough diamond crystals and glorified as "a girl's best friend". Wide use of diamonds in various industrial processes is relatively less famous among ordinary people. However, technological application of diamonds significantly outweighs their jewelry usage and is constantly increasing both in terms of quantity and enhancing the diversity of areas of their application. Such high application significance turns out to be a constant motivation for researchers, busy with elaboration of new methods of diamond synthesis, processing and enduing with necessary features.

One of the problems, which are to be solved for a number of technology developments, is production of needle- and thread-like diamond crystals. Such shaping of original natural and synthetic diamonds is possible due to man-handling (polishing) in the same way as it happens during brilliant production. Other means imply usage of lithography and ion beam technologies, which help to separate fragments of necessary shape from crystals of large size. However, such "cutting" techniques are quite expensive and not always acceptable.

A team of researchers, working at the Faculty of Physics ofthe Lomonosov Moscow State University under the guidance of Professor Alexander Obraztsov, has suggested a technology, which makes possible mass production of small diamond crystals (or crystallites) of needle- and thread-like shapes. The first results, got during the studies in this direction, were published seven years ago in Diamond & Related Materials journal.

Alexander Obraztsov, Professor at the Department of Polymer and Crystal Physics, at the Faculty of Physics of the Lomonosov Moscow State University; Doctor of Science in Physics and Mathematics, being the main research author shares the following comments. He says: "The proposed technique involves usage of a well-known regularity, determining formation of polycrystalline films from crystallites of elongate ("columnar") shape. For instance, ice on a surface of lake often consists of such crystallites, what could be observed while it's melting. Usually, during diamond polycrystalline films production, one strives to provide such conditions, which allow crystallites of columnar shape, composing the films, to tightly connect with each other, creating dense homogeneous structure".

Everything, except diamonds, is gasified

Researchers from the Lomonosov Moscow State University have shown that diamond films, which have been previously perceived as "bad quality" ones as they consist of separate crystallites, not connecting with each other, now could be used for production of diamonds in the form of needle- or thread-like developments of regular pyramid form. In order to achieve this, it's necessary to heat such films to definite temperature in air or in another oxygen-containing environment. When heated, a part of the film material begins oxidizing and gasifies. Due to the fact that oxidation temperature depends on the carbon material features, and diamond crystallites oxidation need maximum temperature, it's possible to adjust this temperature so that all the material, except these diamond crystallites, is gasified. This relatively simple technology combines production of polycrystalline diamond films with specified structural characteristics with their heating in the air. It makes possible mass production of diamond crystallites of various shapes (needle- and thread-like ones and so on). Some idea about such crystallites can be obtained from electron microscopy images.

Example of diamond crystallites of different shapes, obtained with the help of the technology, worked out in the Lomonosov Moscow State University. There are electron microscopy images of diamond films' fragments after their oxidation in the air. The material left after the oxidation is represented by needle-like diamond monocrystals of pyramid shape. 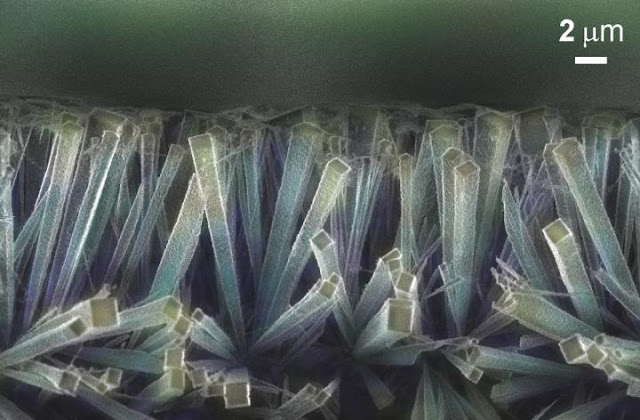 The crystallites could be used, for instance, as high hardness elements: a cutter for high- precision processing, indenters or probes for scanning microscopes. Such application was described in the article, published earlier by the team in journal Review of Scientific Instruments. At the moment all probes, produced using this technology, are commercially offered.

It's possible to manage useful properties of a diamond

During follow-up research and developments, conducted at the Faculty of Physics, the Lomonosov Moscow State University, the initial technology has been significantly improved, what has allowed to diversify shapes and sizes of the needle-like crystallites and extend prospective field of their application. Researchers from the Lomonosov Moscow State University have drawn attention to optical properties of a diamond, which are of significant fundamental scientific and applied interest. The results of these studies are represented in the series of articles in Journal of Luminescence, Nanotechnology, and Scientific Reports.

These recent publications describe structural peculiarities of such diamond crystallites and their interrelation with luminescence features and efficiency of field electron emission. As it is mentioned by the researchers, the latter is, probably, the first example of genuine diamond field-emission (or cold) cathode realization. Many efforts have been made for its obtaining and studying of such kind of cathodes for the last two decades. Luminescence properties of the needle-like diamond crystals could be applied in different types of sensors, quantum optical devices and also in creation of element base for quantum computers and in other areas of science and technology.

Alexander Obraztsov further notices: "I'd especially like to highlight the significant input of young researchers - Viktor Kleshch and Rinat Ismagilov - to these studies. Their enthusiasm and intense work have allowed to get the above described results, which are truly new and possess fundamental scientific and applied importance".

The studies have been conducted with support of the Russian Science Foundation.