Could There Be Life in Pluto’s Ocean?

Pluto is thought to possess a subsurface ocean, which is not so much a sign of water as it is a tremendous clue that other dwarf planets in deep space also may contain similarly exotic oceans, naturally leading to the question of life, said one co-investigator with NASA’s New Horizon mission to Pluto and the Kuiper Belt.

William McKinnon, professor of earth and planetary sciences in Arts & Sciences at Washington University in St. Louis and a co-author on two of four new Pluto studies published Dec. 1 in Nature, argues that beneath the heart-shaped region on Pluto known as Sputnik Planitia there lies an ocean laden with ammonia.

The presence of the pungent, colorless liquid helps to explain not only Pluto’s orientation in space but also the persistence of the massive, ice-capped ocean that other researchers call “slushy” — but McKinnon prefers to depict as syrupy.

View of Pluto with color-coded topography as measured by NASA’s New Horizons spacecraft. Purple and blue are low and yellow and red are high, and the informally named Sputnik Planitia stands out at top as a broad, 1300 km- (800 mile-) wide, 2.5 km- (1.5 mile-) deep elliptical basin, most likely the site of an ancient impact on Pluto. New Horizons data imply that deep beneath this nitrogen-ice filled basin is an ocean of dense, salty, ammonia-rich water. 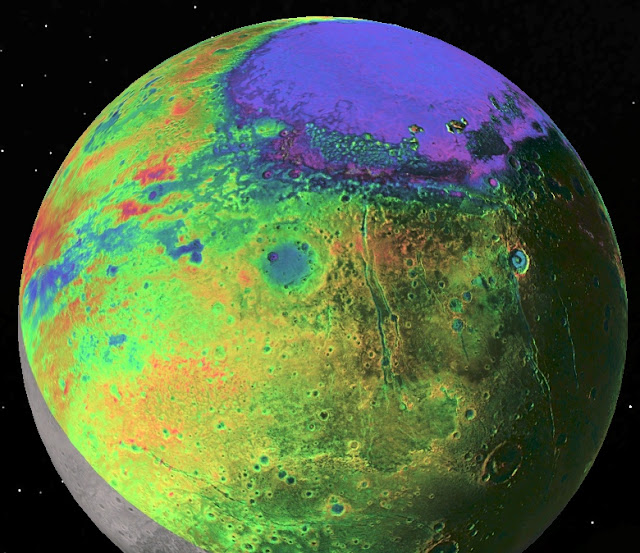 
Using computer models along with topographical and compositional data culled from the New Horizon spacecraft’s July 2015 flyby of Pluto, McKinnon led a study on Sputnik Planitia’s churning nitrogen ice surface that appeared this past June in Nature. He is also an author on the recently released study regarding the orientation and gravity of Pluto caused by this subsurface ocean some 600 miles wide and more than 50 miles thick.

“In fact, New Horizons has detected ammonia as a compound on Pluto’s big moon, Charon, and on one of Pluto’s small moons. So it’s almost certainly inside Pluto,” McKinnon said. “What I think is down there in the ocean is rather noxious, very cold, salty and very ammonia-rich — almost a syrup.

“It’s no place for germs, much less fish or squid, or any life as we know it,” he added. “But as with the methane seas on Titan — Saturn’s main moon — it raises the question of whether some truly novel life forms could exist in these exotic, cold liquids.”

As humankind explores deeper into the Kuiper Belt and farther from Earth, this means to McKinnon the possible discovery of more such subsurface seas and more potential for exotic life.

“The idea that bodies of Pluto’s scale, of which there are more than one out there in the Kuiper Belt, they could all have these kinds of oceans. But they’d be very exotic compared to what we think of as an ocean,” McKinnon said.

“If you’re going to talk about life in an ocean that’s completely covered with an ice shell, it seems most likely that the best you could hope for is some extremely primitive kind of organism. It might even be pre-cellular, like we think the earliest life on Earth was.”

The newly published research delves into the creation — likely by a 125-mile-wide Kuiper Belt object striking Pluto more than 4 billion years ago — of the basin that includes Sputnik Planitia.

The collapse of the huge crater lifts Pluto’s subsurface ocean, and the dense water — combined with dense surface nitrogen ice that fills in the hole — forms a huge mass excess that causes Pluto to tip over, reorienting itself with respect to its big moon.

But the ocean uplift won’t last if warm water ice at the base of the covering ice shell can flow and adjust in the manner of glaciers on Earth. Add enough ammonia to the water, and it can chill to incredibly cold temperatures (down to minus 145 Fahrenheit) and still be liquid, even if quite viscous, like chilled pancake syrup. At these temperatures, water ice is rigid, and the uplifted surface ocean becomes permanent.

“All of these ideas about an ocean inside Pluto are credible, but they are inferences, not direct detections,” McKinnon said, sounding the call. “If we want to confirm that such an ocean exists, we will need gravity measurements or subsurface radar sounding, all of which could be accomplished by a future orbiter mission to Pluto. It’s up to the next generation to pick up where New Horizons left off!”