The formation of a simple coffee stain has been the subject of complex study for decades, though it turns out that there remain some stones still to be turned. Researchers at the University of Nevada, Reno have modeled how a colloidal droplet evaporates and found a previously overlooked mechanism that more accurately determines the dynamics of particle deposition in evaporating sessile droplets, which has ramifications in many fields of today's technological world.
In physics, a "coffee ring" is a pattern left by a puddle of particle-laden liquid after it evaporates. The phenomenon is named for the characteristic ring-like deposit along the perimeter of a spill of coffee. It is also commonly seen after spilling red wine. The mechanism behind the formation of these and similar rings is known as the coffee ring effect or in some instances, the coffee stain effect, or simply ring stain.

An example of the coffee ring effect, shown using an evaporated drop of coffee. 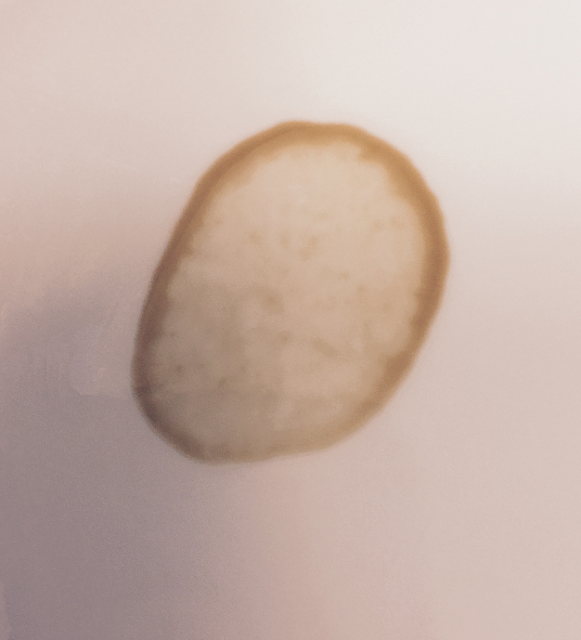 "Understanding and manipulating the dynamics of particle deposition during evaporation of colloidal drops can be used in DNA sequencing, painting, ink jet printing and fabricating ordered micro/nano-structures," Hassan Masoud, assistant professor in the Department of Mechanical Engineering, said. "And now we understand it better than ever before. Our discovery builds on a large body of work; we took an extra step though, modeling the interaction of suspended particles with the free surface of the drop. We believe our findings are going to fundamentally change the common perception on the mechanism responsible for the so-called 'coffee-ring' phenomenon."

Despite a decent amount of server space and speed, assistant professor of mechanical engineering Hassan Masoud, center, his doctoral student Saeed Jafari Kang, right, and post-doctoral fellow Vahid Vandadi opted to write out their many equations long-hand, on dozens of very large pieces of newsprint paper as they modelled a more accurate look at coffee-ring droplet deposition. 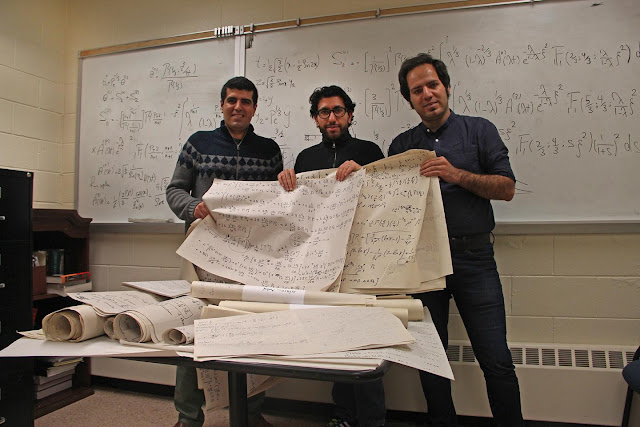 When a droplet dries on a surface, the particles suspended in it usually deposit in a ring-like pattern, leaving a stain or residue, called the coffee-ring effect. Until now, the stain was thought to form as a result of the fluid flow inside the drop. Masoud and his team found that the free surface of the droplet, the top layer where it is in contact with the air, plays a critical role in the deposition of the particles.

"When the drop evaporates, the free surface collapses and traps the suspended particles," Masoud said. "Our theory shows that eventually all the particles are captured by the free surface and stay there for the rest of their trip towards the edge of the drop."

Masoud and his team used a less familiar modeling system, known as the Toroidal Coordinate System, that allowed them to reduce the three-dimensional governing equations into a one-dimensional form. Despite a decent amount of server space and speed, the team opted to write out their many equations long-hand, on dozens of very large pieces of news print paper.

"Our innovative approach - and using some ugly-long equations - distinguishes our work from previous research," he said. "No one else has used this coordinate system for this problem, and this allows us to track the motion of particles in the drop in a natural way."

The discovery allows scientists to manipulate the motion of solute particles by altering the surface tension of the liquid-gas interface rather than controlling the bulk flow inside the drop.

"We can use surfactants to tweak the surface tension," Masoud said. "In a simple example, if you are cleaning solar panels, which can lose up to 90 percent of their efficiency when dirty, the preferred method of cleaning is water, but that leaves behind a stain that is hard to wipe out. Changing the flow dynamics during evaporation with a specialized cleaning agent can leave the panels cleaner and more efficient."

Their peer-reviewed paper, "Alternative mechanism for coffee-ring deposition based on active role of free surface," was published Dec. 12 in the American Physical Society's publication Physical Review E.
on December 22, 2016