New research into chimpanzees suggests that, when it comes to altruistically helping a fellow chimpanzee, they are ‘indifferent’.

The paper, published in Nature Communications, found no evidence that chimpanzees had a tendency to help others – or conversely to be spiteful - when there was no anticipated benefit to themselves.

In two experiments, chimpanzees could determine whether or not a peer received access to food, and they displayed no preference for either providing access or denying access with their actions.

The team, from the universities of Birmingham, Manchester and St Andrews, and the Max Planck Institute in Leipzig, argue that previous experiments that imply ‘prosocial’ or helpful behaviour in non-human primates were likely a by-product of task design that nudged chimpanzees into participation.

Chimpanzees at the Ngamba Island Chimpanzee Sanctuary, a forested island in Uganda, participated in two studies. None of the chimpanzees were known to be closely related to each other.

In the first experiment, 13 chimpanzees were split into two groups and tested with three recipient chimpanzees. They were able to see and hear one another and the equipment, including a food box containing shelled peanuts that could only be reached from the recipients’ room. 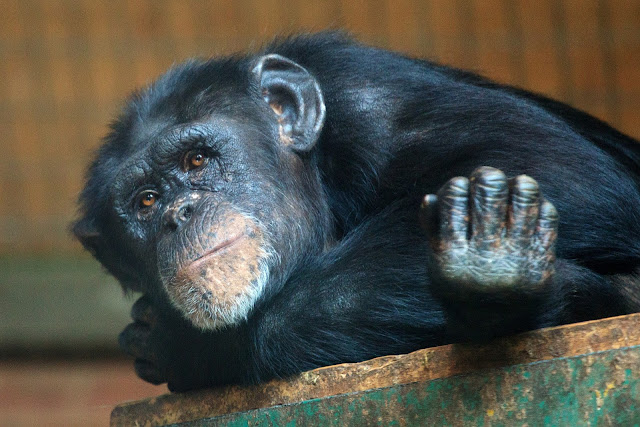 As in previous studies, the chimpanzees released the peg at high rates but this quickly declined when there was no reward for them. Importantly, there was no difference in peg release between the two groups - the chimpanzees were no more likely to release the peg to help the recipient in the go group as they were to block access to food in the no-go group.

In the second experiment, 11 of the same chimpanzees were given training sessions in which they individually learned the impact of their actions on the recipients’ food boxes by being able to go to the room containing the food box.

This additional knowledge did not lead to a rise in peg release where food would be given to another chimpanzee, nor did it decrease peg releases when this would prevent others from eating.

Dr Claudio Tennie, from the University of Birmingham, explained, “The results of these two experiments combined demonstrate that the chimpanzees did not act in a manner that would produce benefits for others in a task where there was no perceived benefit to themselves.”

“Indeed, given that the participants were just as likely to prevent access to food as they were to permit access, chimpanzees are no more altruistic than they are spiteful. Even after they demonstrated a clear understanding of the consequences of their actions, they remained indifferent to any effects these actions may have on others.”

Dr Keith Jensen, from the University of Manchester, added, “The evolution of social behaviour, and what drives individuals to act altruistically, is an important and active area of debate. Chimpanzees appear indifferent to others when it comes to giving food to others in experimental settings, yet puzzlingly, they have been shown to help humans and other chimpanzees. There has been an appealing suggestion that the roots of human altruism extend down at least as far as our common ancestor with chimpanzees. However, the results of this study challenges that view. “Helping” might have formerly arisen as a by-product of interesting tasks.”

“If true, this would mean that prosocial behaviour has developed late in evolution, after our split with the other apes.”

Contacts and sources:
Luke Harrison
University of Birmingham .
on December 21, 2016