A research team led by Yun Hang Hu, the Charles and Carroll McArthur Professor of materials science and engineering at Michigan Tech, created a brand-new way to synthesize sodium-embedded carbon nanowalls. Previously, the material was only theoretical and the journal NanoLetters (DOI: 10.1021/acs.nanolett.6b04742) recently published this invention.

A scanning electron microscope image of sodium-embedded carbon reveals the nanowall structure and pores of the material. 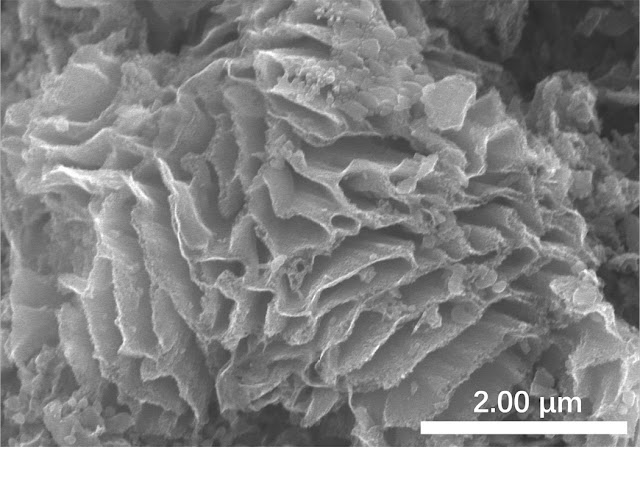 "Sodium-embedded carbon's conductivity is two orders of magnitude larger than three-dimensional graphene," Hu says. "The nanowall structure, with all its channels and pores, also has a large accessible surface area comparable to graphene."

This is different from metal-doped carbon where metals are simply on the surface of carbon and are easily oxidized; embedding a metal in the actual carbon structure helps protect it. To make such a dream material, Hu and his team had to create a new process. They used a temperature-controlled reaction between sodium metal and carbon monoxide to create a black carbon powder that trapped sodium atoms. Furthermore, in collaboration with researchers at University of Michigan and University of Texas at Austin, they demonstrated that the sodium was embedded inside the carbon instead of adhered on the surface of the carbon. The team then tested the material in several energy devices.

In the dye-sensitized solar cell world, every tenth of a percent counts in making devices more efficient and commercially viable. In the study, the platinum-based solar cell reached a power conversion efficiency of 7.89 percent, which is considered standard. In comparison, the solar cell using Hu's sodium-embedded carbon reached efficiencies of 11.03 percent.

Supercapacitors can accept and deliver charges much faster than rechargeable batteries and are ideal for cars, trains, elevators and other heavy-duty equipment. The power of their electrical punch is measured in farads (F); the material's density, in grams (g), also matters.

Activated carbon is commonly used for supercapacitors; it packs a 71 F g-1 punch. Three-dimensional graphene has more power with a 112 F g-1 measurement. Sodium-embedded carbon knocks them both out of the ring with a 145 F g-1 measurement. Plus, after 5,000 charge/discharge cycles, the material retains a 96.4 percent capacity, which indicates electrode stability.

Hu says innovation in energy devices is in great demand. He sees a bright future for sodium-embedded carbon and the improvements it offers in solar tech, batteries, fuel cells, and supercapacitors.