Bisphenol A (BPA) is a widely used industrial chemical found in many household items, including resins used to line metal storage containers, such as food cans. Now, researchers at the University of Missouri have found that short-term feeding of canned dog food resulted in a significant increase of BPA in dogs. Scientists believe that because of shared environments, dog exposure to BPA through canned foods could have human health implications.

"Bisphenol A is a prevalent endocrine-disrupting chemical found in canned foods and beverages," said Cheryl Rosenfeld, an associate professor of biomedical sciences in the MU College of Veterinary Medicine and an investigator in the Bond Life Sciences Center. "We wanted to determine if short-term feeding of widely available commercial canned food could alter BPA concentrations in dogs. Thus, we assessed BPA contained within pet food cans. We also analyzed whether disturbances in bacteria found in the gut and metabolic changes could be associated with exposure to BPA from the canned food."

Rosenfeld and her team assessed BPA contained within pet food cans. They also analyzed whether disturbances in bacteria found in the gut and metabolic changes could be associated with exposure to BPA from the canned food. 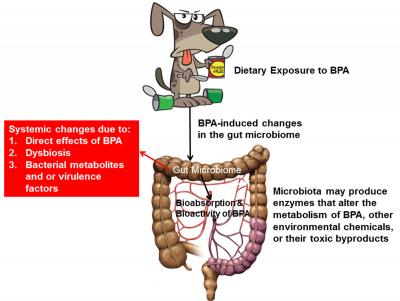 Dog owners volunteered their healthy pets for the study. Blood and fecal samples were collected prior to the dogs being placed on one of two commonly used, commercial canned food diets for two weeks; one diet was presumed to be BPA-free. Robert Backus, an associate professor in the Department of Veterinary Medicine and Surgery in the MU College of Veterinary Medicine, and other researchers on the team then analyzed the cans and the food contained in the cans for BPA levels and performed gut microbiome assessments.

"The dogs in the study did have minimal circulating BPA in their blood when it was drawn for the baseline," Rosenfeld said. "However, BPA increased nearly three-fold after being on the either of the two canned diets for two weeks. We also found that increased serum BPA concentrations were correlated with gut microbiome and metabolic changes in the dogs analyzed. Increased BPA may also reduce one bacterium that has the ability to metabolize BPA and related environmental chemicals."

Dogs who share internal and external environments with their owners are likely excellent indicators of the effects of BPA and other industrial chemicals on human health.

"We share our homes with our dogs," Rosenfeld said. "Thus, these findings could have implications and relevance to humans. Indeed, our canine companions may be the best bio-sentinels for human health concerns."

Contacts and sources:
Jeff Sossamon
University of Missouri
Citation: "Bisphenol A (BPA) in the serum of pet dogs following short-term consumption of canned dog food and potential health consequences of exposure to BPA" was published in Science of the Total Environment. http://dx.doi.org/10.1016/j.scitotenv.2016.11.162
on December 22, 2016