Better Trees for the Better Guitars Goal of Genetic Search

Jill Hamilton is a scientist at North Dakota State University who studies plant evolution using genetic tools. The audience for her research is usually scientists or conservation managers.

The company’s interest in science led Olson to Hamilton and her research on the Lutz spruce, a naturally occurring hybrid between Sitka and white spruce found in northwestern British Columbia and Alaska. As a doctoral student, Hamilton, who is now an assistant professor of biological sciences at NDSU, had developed genetic tools to identify the ancestry of trees found within the hybrid zone. 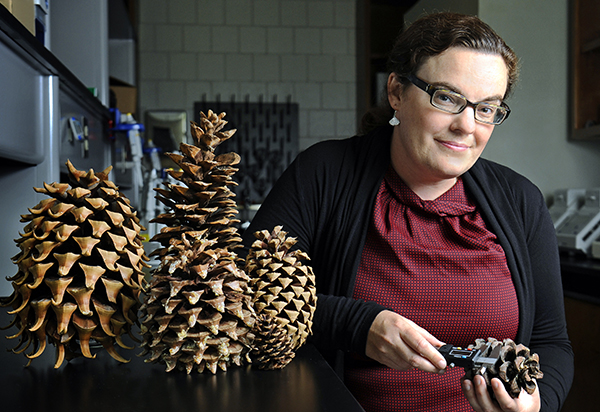 
Olson had great interest in finding Lutz Spruce. It had had a reputation for being a high quality tonewood, but only individual guitar builders and small manufacturers had used it. “It remained rather hard to find because the suppliers produced a rather low volume of guitar tops,” he said.

Hamilton’s name kept coming up in scientific publications, so Olson contacted her. He wanted to know more about using genetic research to predict tone quality and identify where the ideal trees for tonewood might grow within the hybrid zone.

It was an application Hamilton had not considered, but she was intrigued by how the company was asking scientific questions to advance their field. “I thought my research would be important for foresters,” she said. “Never in my wildest dreams did I imagine guitars coming out of it.”

Pacific Rim Tonewoods has been successful sourcing Lutz spruce, and now its client Taylor Guitars produces two lines of high-end guitars made from that wood.

“For us it is very important to find the most suitable logs,” Olson said. “That’s why we go to great lengths to engage really smart people like Jill Hamilton.”
The company and Hamilton have formed a partnership. Last summer she traveled to British Columbia with Olson to collect needle samples. She is expanding her research on hybrid spruce, genotyping trees from different hybrid zone regions.

NDSU students are gaining research experience, too. They are involved in extracting DNA from the spruce samples and will perform statistical analyses on the data in the future.

“This is expanding my research program by providing us the opportunity for further field research and genetic analysis of the hybrid zone, but also has the great potential to provide some really interesting information that will inform sourcing material for tonewood into the future,” Hamilton said. “So really this partnership has evolved into a wonderful marriage between basic and applied science.”