What actually defines a tectonic plate and determines its thickness is a hotly debated topic. This is because while scientists know that the top of the plate is the surface of the Earth, defining the plate's bottom boundary has been challenging.

"Understanding the thickness of the plate is important to understanding how plates move around, both when they form at mid-ocean ridges and later on when the material goes back down into the Earth through subduction zones such as those in Cascadia, the Andes, Japan and Indonesia," said Warren, assistant professor in the Department of Geological Sciences in the College of Earth, Ocean, and Environment.

Photomicrograph taken with a petrographic microscope of a glass slide of peridotite rock. This shows the two main minerals in peridotite: olivine (multi-colored grains) and pyroxene (black/white grains). 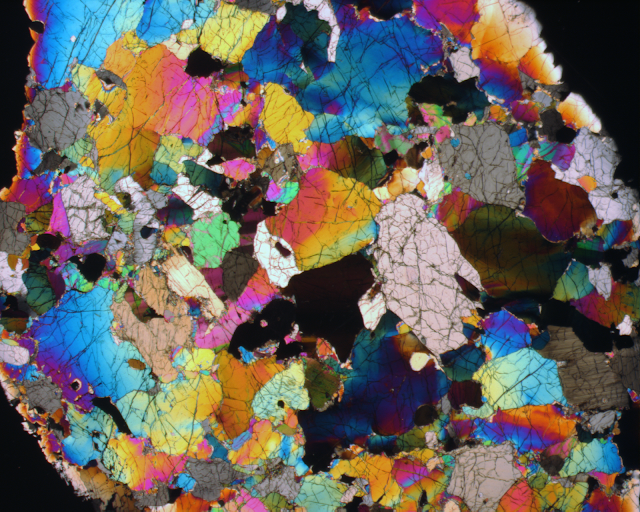 "It also can help scientists model and predict future earthquake and volcanic hazards, where they might occur and how deep the devastation might be depending on what the models show."

To understand what's happening inside the Earth, scientists must be creative because studying the interior of the Earth in situ is impossible.

Instead, scientists study how seismic waves pass through the Earth and then invert the signal that is received to reverse engineer what's happening. They also model the thermal properties of the rock, including where temperature changes occur, because they know that the interior of the Earth is hotter than the surface crust.

"Science has been telling us that what we predict for temperature changes within the Earth should agree with what the seismic waves are telling us. The problem has been that these two models don't agree," said Warren, a petrology expert who studies the origin of rocks and how they formed.

One longstanding argument has been whether the Gutenberg discontinuity -- the identification of a change in seismic properties -- represents the bottom of the plate.

To investigate this problem, Warren and her colleagues performed laboratory experiments on olivine, the main mineral found in the Earth's mantle (the upper ~250 miles of the planet). Olivine also is the main mineral in peridotite rock, which is considered to be a robust model of the interior of the Earth's composition.

The researchers took olivine and added melt (also known as basalt) to mimic how a new plate is created at a mid-ocean ridge. The team then twisted the olivine-melt mixture under high temperatures and high pressure to determine the influence of melt on the alignment of olivine crystals. They then used these experiments to predict the seismic signature of this rock and compared it to the seismic signature associated with the Gutenberg discontinuity.

Shown is a typical rock outcrop of peridotite, which contains a series of melt veins, the slightly green horizontal bands running across the rock. 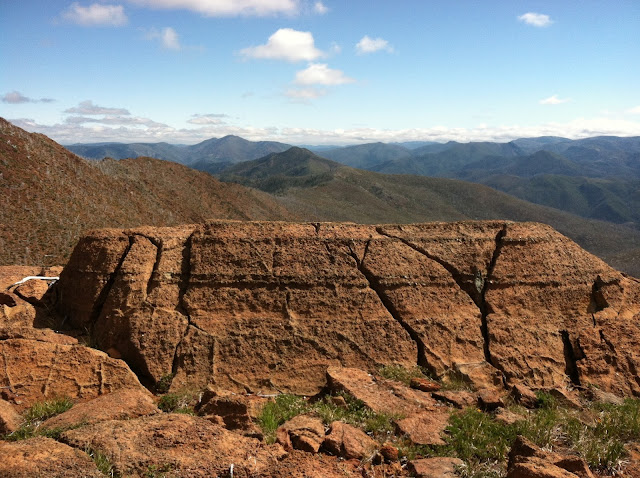 The team's results showed that the Gutenberg discontinuity does not define the bottom of the plate, but instead is caused by the presence of olivine-melt mixtures within tectonic plates.

"I've spent over a decade studying how olivine minerals are oriented in peridotite rocks because the flow patterns provide a historical record of how these rocks from the mantle have changed and deformed over time," says Warren.

The research team's results suggest the best way to model the plate thickness is based on the thermal profile and the conductive cooling that occurs as a plate ages.

"We think that the bottom of the plate is below where you have a cooling in the temperature profile. It is a layer that is associated with melt being trapped or frozen in the rock and changing the seismic properties in the rock that subsequently produced the layer that we're imaging," she said. "By our estimates, this would mean that the tectonic plates in the ocean are approximately 100 kilometers or about 62 miles thick. "

The team's data also offers an explanation for the Guttenberg discontinuity, Warren continued, saying that it corresponds to melt that was trapped or frozen in the rock after melting at mid-ocean ridges, which produced a change in how the seismic waves pass through the rock.

Contacts and sources:
University of Delaware
on December 21, 2016