A Brainless Blob That Can Learn and Teach

It isn’t an animal, a plant, or a fungus. The slime mold (Physarum polycephalum) is a strange, creeping, bloblike organism made up of one giant cell. Though it has no brain, it can learn from experience, as biologists at the Research Centre on Animal Cognition (CNRS, Université Toulouse III—Paul Sabatier) previously demonstrated.

Now the same team of scientists has gone a step further, proving that a slime mold can transmit what it has learned to a fellow slime mold when the two combine. These new findings are published in the December 21, 2016, issue of the Proceedings of the Royal Society B.

Imagine you could temporarily fuse with someone, acquire that person’s knowledge, and then split off to become your separate self again. With slime molds, that really happens! The slime mold—Physarum polycephalum for scientists—is a unicellular organism whose natural habitat is forest litter. But it can also be cultured in a laboratory petri dish.

P. polycephalum (⌀ = ~10 cm), a single-celled organism otherwise known as a slime mold, grown on agar in the laboratory. 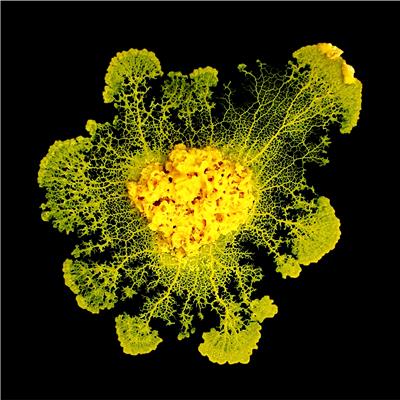 Audrey Dussutour and David Vogel had already trained slime molds to move past repellent but harmless substances (e.g. coffee, quinine, or salt) to reach their food.[1] They now reveal that a slime mold that has learned to ignore salt can transmit this acquired behavior to another simply by fusing with it.

The new, fused slime molds then had to cross salt-covered bridges. To the researchers' surprise, the mixed slime molds moved just as fast as habituated pairs, and much faster than naive ones, suggesting that knowledge of the harmless nature of salt had been shared. This held true for slime molds formed from 3 or 4 individuals. No matter how many fused, only 1 habituated slime mold was needed to transfer the information.

Habituated (H) P. polycephalum individuals fusing with a naive (N) individual. The pseudopodium crossing the bridge belongs to the naive slime mold. A vein may be seen forming between two slime molds at their point of contact (see magnified region). 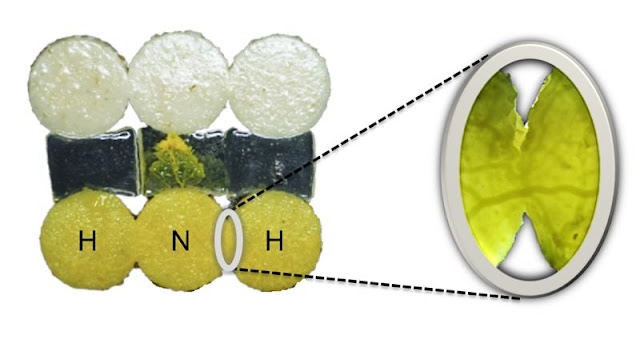 To check that transfer had indeed taken place, the scientists separated the slime molds 1 hour and 3 hours after fusion and repeated the bridge experiment. Only naive slime molds that had been fused with habituated slime molds for 3 hours ignored the salt; all others were repulsed by it. This was proof of learning. When viewing the slime molds through a microscope, the scientists noticed that, after 3 hours, a vein formed at the point of fusion. This vein is undoubtedly the channel through which information is shared.

The next challenges facing the researchers are to elucidate the form this information takes, and to test whether more than one behavior can be transmitted simultaneously. If Slime Mold A learns how to ignore quinine and Slime Mold B to ignore salt, the biologists wonder whether both behaviors can be transmitted and retained through fusion.

[2] Physarum polycephalum, a cell with thousands of nuclei that can cover an area on the order of 1 m2, has the natural ability to fragment when encountering an obstacle and to fuse with other slime molds.