Chimpanzees often use tools to extract or consume food but which tools they choose for which purpose can differ depending on where they live. In 2010, researchers at the Max Planck Institute for Evolutionary Anthropology in Leipzig, Germany, initiated the ‘Pan African Programme: The Cultured Chimpanzee’ to characterize and understand the differences in chimpanzee behaviors in un- and poorly studied ape populations across Africa. This is how the researchers encountered a new behavioral variant: Algae fishing with long robust tools at a temporary research site in Bakoun, Guinea. 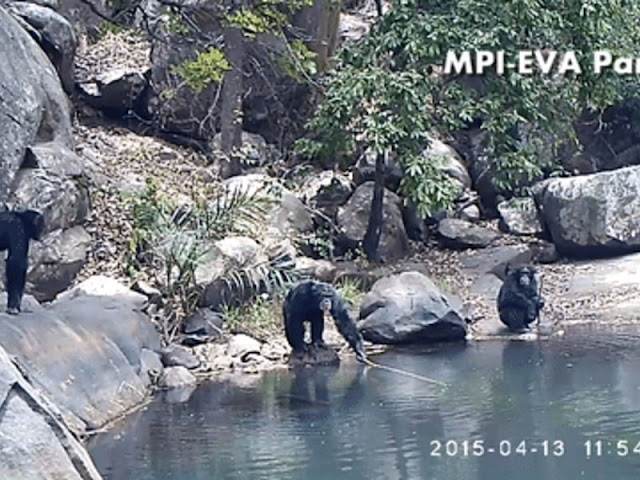 Chimpanzees have been studied for almost 60 years at a few long-term field sites which have been fundamental for providing insights into natural chimpanzee behavior and most importantly into the differences between populations. However, the true behavioral repertoire of chimpanzees is under represented by these long-term sites alone. Therefore, to better understand the ecological and evolutionary drivers of behavioral diversification in chimpanzees, researchers of the Department of Primatology at the Max Planck Institute for Evolutionary Anthropology initiated the ‘Pan African Programme: The Cultured Chimpanzee’ (PanAf).

Since 2010, while following a unique standardized protocol, data on chimpanzee behavior, demography and resource availability have been collected from over 40 different temporary research sites across Africa. “The PanAf project represents a new approach to studying chimpanzees and will provide many interesting insights into chimpanzee demography and social structure, genetics, behavior and culture”, says Hjalmar Kuehl of the Max Planck Institute for Evolutionary Anthropology and the German Centre for Integrative Biodiversity Research.

“The PanAf is only possible due to the numerous collaborations with chimpanzee researchers, field workers and national wildlife authorities in 15 countries across Africa”. Earlier this year, the collaborative network of researchers published a paper detailing a newly observed ‘chimpanzee accumulative stone throwing’ behavior.

Since chimpanzees are not habituated to human presence at the PanAf sites, the researchers rely on a wide spectrum of non-invasive sampling methods, including remote camera traps. After discovering conspicuous sticks along some of the rivers and ponds in Bakoun, PanAf site manager Anthony Agbor placed camera traps along these bodies of water.

“The tool-use appears quite different from what is known from a nearby long-term chimpanzee site at Bossou, Guinea and also differed from previous reports of rare algae scooping in Congo” says Ammie Kalan of the Max Planck Institute for Evolutionary Anthropology. “All age and sex classes of Bakoun chimpanzees were seen in the camera trap videos to successfully fish for algae in a river, stream or pond using woody branches or twigs as fishing rods. The tools were on average longer and sturdier than the algae fishing tools that are known from Bossou. Some Bakoun tools were more than 4 meters long!”

The researchers note that the freshwater green algae being targeted is the same genus as that at Bossou (Spirogyra), but at Bakoun the algae grow on the bottom of the stream beds and does not collect on the surface as it does at Bossou. “The ecology of the particular algae growing at each site may drive the types of tools necessary to harvest the algae” says Christophe Boesch, Director of the Primatology Department at the Max Planck Institute for Evolutionary Anthropology, “we suggest that the algae probably provide an important nutritional benefit to the chimpanzees at Bakoun, especially during the dry season when chimpanzees were observed to fish algae for up to an hour at the same spot”.

Further analyses of videos and other data collected from the PanAf are currently underway. Anyone can participate in watching and annotating the PanAf videos using the online citizen science website www.chimpandsee.org. At Chimp&See citizen scientists can watch the over 1 million video clips the PanAf has recorded from all across Africa of chimpanzees, gorillas, elephants, buffalo, leopards and many more species. Visit www.chimpandsee.org and you could be a citizen scientist contributing to analyzing data in minutes and help with further discoveries in the wild.