What Will They Make? Molecular Assembly Produces Complex DNA Nanostructures, Next Molecular Robots

Many self-organized systems in nature exploit a sophisticated blend of deterministic and random processes. No two trees are exactly alike because growth is random, but a Redwood can be readily distinguished from a Jacaranda as the two species follow different genetic programs. The value of randomness in biological organisms is not fully understood, but it has been hypothesized that it allows for smaller genome sizes—because not every detail must be encoded. Randomness also provides the variation underlying adaptive evolution.

In contrast to biology, engineering seldom takes advantage of the power of randomness for fabricating complex structures. Now, a group of Caltech scientists has demonstrated that randomness in molecular self-assembly can be combined with deterministic rules to produce complex nanostructures out of DNA.

Colored atomic force microscope image of self-assembled random tree structures on the surface of DNA tile arrays. Each tree has a single loop as the “root”. 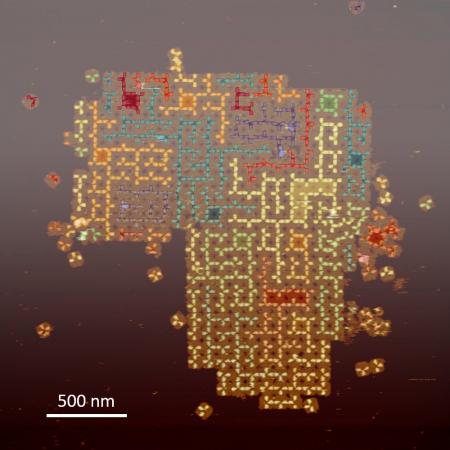 The work, done in the laboratory of Assistant Professor of Bioengineering Lulu Qian, appears in the November 28 issue of the journal Nature Nanotechnology.

Living things use DNA to store genetic information, but DNA can also be used as a robust chemical building block for molecular engineering. The four complementary molecules that make up DNA, called nucleotides, bind together only in specific ways: A's bind with T's, and G's bind with C's. In 2006, Paul Rothemund (BS '94), research professor of bioengineering, computing and mathematical sciences, and computation and neural systems at Caltech, invented a technique called DNA origami that takes advantage of the matching between long strands of DNA nucleotides, folding them into everything from nanoscale artwork to drug-delivery devices. The self-assembled structures formed through DNA origami may be functional by themselves or they may be used as templates to organize other functional molecules—such as carbon nanotubes, proteins, metal nanoparticles, and organic dyes—with unprecedented programmability and spatial precision.

Using DNA origami as a building block, researchers have made larger DNA nanostructures, such as periodic arrays of origami tiles. However, because the building block is just repeated everywhere, the complexity of patterns that can be formed on these larger structures is quite limited. Entirely deterministic assembly processes—controlling the design of each individual tile and its distinct position in the array—can give rise to complex patterns, but these processes do not scale up well.

Conversely, if only random processes are involved and the global features of the array are not controlled by design rules, it is impossible to create complex patterns with desired properties without simultaneously generating a large fraction of undesired molecules that are wasted. Until the work by Qian and her colleagues, combining deterministic processes with random ones had never been systematically explored to create complex DNA nanostructures.

"We were looking for molecular self-assembly principles that embrace both deterministic and random aspects," says Qian. "We developed a simple set of rules that allow DNA tiles to bind randomly but only into specific controlled patterns."

The approach involves designing patterns on individual tiles, modulating the ratios of different tiles, and determining which tiles can bind together during self-assembly. This leads to large-scale emergent features with tunable statistical properties—a phenomenon the authors dub "programmable disorder."

"The structures that we can build have programmably random aspects," says Grigory Tikhomirov, a senior postdoctoral scholar in biology and biological engineering, and lead author on the paper. "For example, we can make structures that have lines that take seemingly random paths, but we can ensure that they never intersect and always eventually close up into loops."

In addition to loops, the team chose two other examples, mazes and trees, to demonstrate that many nontrivial properties of these structures can be controlled by simple local rules. They found these examples interesting because loop, maze, and tree structures widely exist in nature across multiple scales. For example, lungs are tree structures at the millimeter to centimeter scale, and neural dendrites are tree structures at the micrometer to millimeter scale. The controlled properties that they showed include the branching rules, the growth directions, the proximity between adjacent networks, and the size distribution.

The group was first inspired by the classic Truchet tiles, which are square tiles with two diagonally symmetrical arcs of DNA on the surface. There are two rotationally asymmetrical orientations of the arc pattern (see image below). Allowing a random choice of the two tile orientations at each location in the array, the pattern will continue through neighboring tiles, either becoming loops of various sizes or exiting from an edge of the array.

To create Truchet arrays at the molecular scale, the team used the DNA origami technique to fold DNA into square tiles and then designed the interactions between these tiles to encourage them to self-assemble into large two-dimensional arrays.

Different types of global patterns emerge when tiles are marked with different local patterns. For example, if each randomly oriented tile carries a "T" rather than two arcs, the global pattern is a maze with branches and loops rather than only loops (see images below). If the self-assembly rules constrain the possible relative orientation of neighboring "T" tiles, it is possible to ensure that other than a single "root," the branches in the mazes never close into loops—producing trees. To explore the full generality of these principles, Qian's team developed a programming language for random DNA origami tilings.

Self-assembled loop, maze, and tree structures on the surface of DNA tile arrays. Top row, random mazes with three-way and four-way junctions of varying distances between adjacent junctions versus only three-way junctions of a fixed distance between adjacent junctions. Middle row, random trees (each tree has a single loop as the "root") with longer branches of varying lengths versus shorter branches of fixed lengths. Bottom row, random loops with tunable lengths and number of crossings. 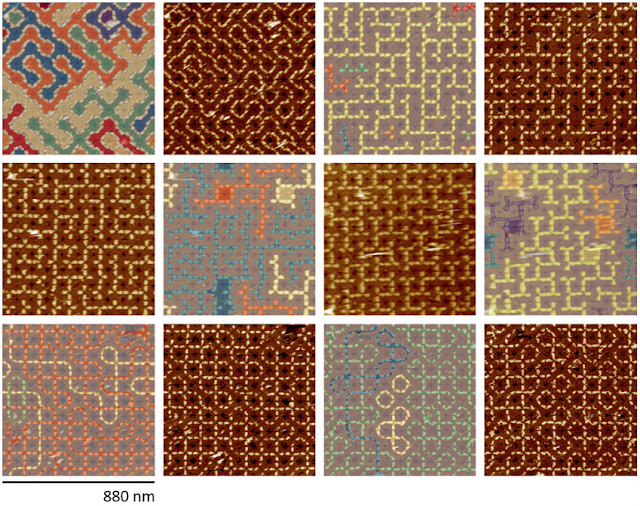 "With this programming language, the design process starts with a high-level description of the tiles and arrays, which can be automatically translated to abstract array diagrams and numerical simulations, then moves to DNA origami tile design including how the tiles interact with each other on their edges. Finally, we design DNA sequences," Qian says. "With these DNA sequences, it is straightforward for researchers to order the DNA strands, mix them in a test tube, wait for the molecules to self-assemble into the designed structures overnight, and obtain images of the structures using an atomic force microscope."

The group's method of programmable disorder has diverse future applications. For example, it could be used to build complex testing environments for ever-more-sophisticated molecular robots—DNA-based nanoscale machines that can move on a surface, pick up or drop off proteins or other kinds of molecules as cargos, and make decisions about navigation and actions.

"The potential applications are much broader," Qian adds. Since the 1990s, random one-dimensional chains of polymers have been used to revolutionize chemical and material synthesis, drug delivery, and nucleic acid chemistry by creating vast combinatorial libraries of candidate molecules and then selecting or evolving the best ones in the laboratory. "Our work extends the same principle to two-dimensional networks of molecules and now creates new opportunities for fabricating more complex molecular devices organized by DNA nanostructures," she says.

The paper is titled "Programmable disorder in random DNA tilings." This work was funded by the National Science Foundation, a National Institutes of Health National Research Service Award, and the Burroughs Wellcome Fund.
on November 29, 2016