Technion researchers have demonstrated, for the first time, that laser emissions can be created through the interaction of light and water waves. This “water-wave laser” could someday be used in tiny sensors that combine light waves, sound and water waves, or as a feature on microfluidic “lab-on-a-chip” devices used to study cell biology and to test new drug therapies.

For now, the water-wave laser offers a “playground” for scientists studying the interaction of light and fluid at a scale smaller than the width of a human hair, the researchers write in the new report, published November 21 in Nature Photonics. 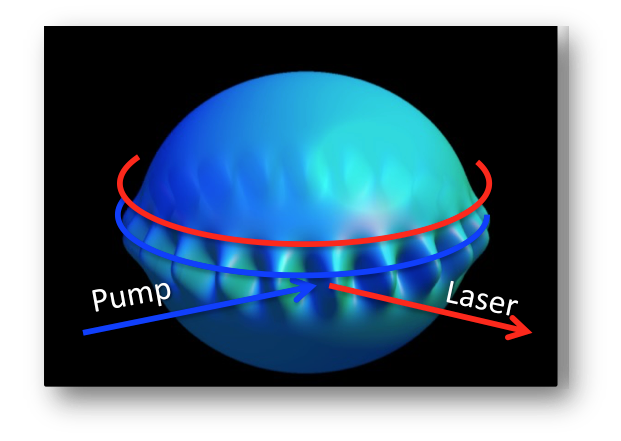 
The study was conducted by Technion-Israel Institute of Technology students Shmuel Kaminski, Leopoldo Martin, and Shai Maayani, under the supervision of Professor Tal Carmon, head of the Optomechanics Center at the Mechanical Engineering Faculty at Technion. Carmon said the study is the first bridge between two areas of research that were previously considered unrelated to one another: nonlinear optics and water waves.

A typical laser can be created when the electrons in atoms become “excited” by energy absorbed from an outside source, causing them to emit radiation in the form of laser light. Professor Carmon and his colleagues now show for the first time that water wave oscillations within a liquid device can also generate laser radiation. 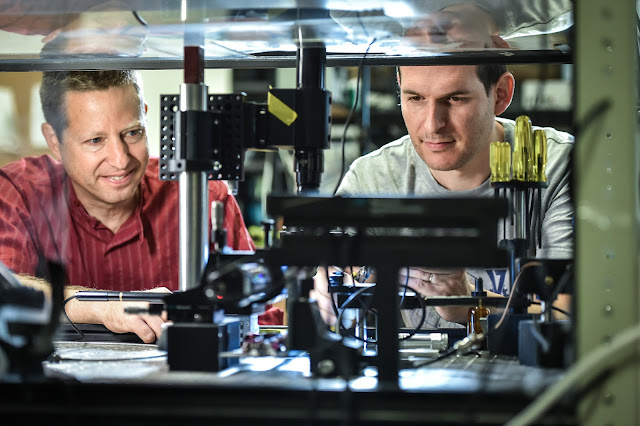 To compensate for this low efficiency, the researchers created a device in which an optical fiber delivers light into a tiny droplet of octane and water. Light waves and water waves pass through each other many times (approximately one million times) inside the droplet, generating the energy that leaves the droplet as the emission of the water-wave laser.

The interaction between the fiber optic light and the miniscule vibrations on the surface of the droplet are like an echo, the researchers noted, where the interaction of sound waves and the surface they pass through can make a single scream audible several times. In order to increase this echo effect in their device, the researchers used highly transparent, runny liquids, to encourage light and droplet interactions.

Furthermore, a drop of water is a million times softer than the materials used in current laser technology. The minute pressure applied by light can therefore cause droplet deformation that is a million times greater than in a typical optomechanical device, which may offer greater control of the laser’s emissions and capabilities, the Technion scientists said.