The transparent belly of a tiny beast has revealed how algae-infecting chloroviruses bloom in freshwater around the world, says a new study from the University of Nebraska-Lincoln.

Publishing in the journal Proceedings of the National Academy of Sciences, the study’s authors have reported the first evidence that a predator’s consumption of prey can catalyze the natural rise and fall of chlorovirus populations. The findings represent a potential "game-changer" in the study of virology, the authors said, by suggesting that the food webs in an ecosystem could profoundly affect the rate and magnitude of viral replication.

Chloroviruses replicate by infecting green algae that normally live inside a species of single-cell paramecium. The algae and paramecia enjoy a mutually beneficial relationship: Algae supply the paramecia with food as the paramecia provide transportation and protection from the chloroviruses.

A millimeter-sized crustacean known as a copepod excretes partially digested paramecia and the green algae living inside those paramecia. A new study has shown that this partial digestion exposes the otherwise-protected algae to chloroviruses, allowing the viruses to replicate and bloom in their freshwater habitats. 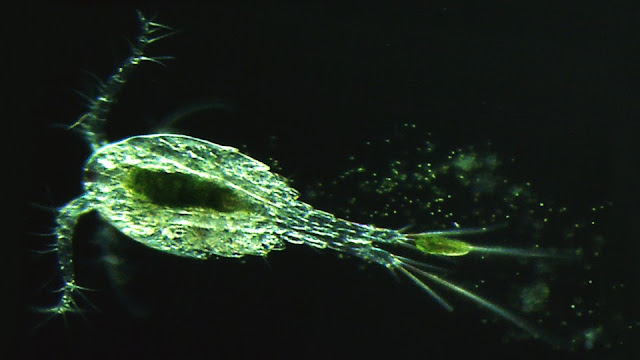 Meanwhile, chloroviruses stay close by attaching to the surface of paramecia and awaiting an opportunity to infect the algae. But virologists had yet to answer the question of how a chlorovirus actually gains access to its target, which remains safe while encased in the paramecia.

The answer appears to lie with a group of millimeter-long crustaceans known as copepods. Researchers have long known that the transparent, one-eyed crustaceans feed on paramecia. But the Nebraska team showed that the crustaceans only partially digest the paramecia, breaking them down just enough to expose the still-living algae before excreting them into the water.

No longer protected by the now-ruptured paramecia, the green algae quickly fall victim to the chlorovirus. The crustaceans thus act as a catalyst for viral infection and replication, the authors said.

“We don’t know anybody who’s ever seen anything quite like it,” said chlorovirus discoverer James Van Etten, the university’s William Allington Distinguished Professor of Plant Pathology. “This is the first example, as far as we know, where a predator is actually releasing the host for a virus.”

The researchers came to the conclusion by dropping concentrations of the chlorovirus and algae-housing paramecia into samples of freshwater. In the absence of a paramecia-chomping copepod, chlorovirus levels barely rose over several days. Yet when the team added just a single copepod, those levels increased nearly 100 times in just 24 hours. That spike approximated the rise in chloroviruses observed when the researchers instead burst the paramecia with sound waves, indicating that this exposure is what causes the virus to bloom.

Co-author David Dunigan, research professor of plant pathology, said the finding illustrates how the structure of food webs in an ecosystem may influence viral propagation.

“It’s potentially a game-changer in virology, because it means that the gut becomes a very special place for virology,” Dunigan said. “Generally, virology is taught from the point of view that infection comes from random collisions between the cell of the host (and the virus). In other words, the probability of infection under those conditions is just a function of the concentration of these two things.

A transparent copepod consumes single-cell paramecia in this time-lapse video. University of Nebraska-Lincoln researchers showed that the copepod's consumption of paramecia increased chlorovirus levels by nearly 100 times in just 24 hours.

“What’s very different about what we’re seeing is that it’s independent of concentrations. The outcome – the genesis of the virus – is essentially (a result of) how fast the predator eats. If it eats more, you get more virus.”

The team said this variable may also help explain the cyclical fluctuations of chlorovirus populations, which rise and fall throughout a year. John DeLong, assistant professor of biological sciences, introduced the rate of copepod foraging into a mathematical model designed to predict viral replication rates in natural environments.

DeLong found that the model churned out a bloom-and-wither dynamic that generally matched the magnitude and length of chlorovirus cycles observed in freshwater lakes.

“So we just basically piggybacked virus production onto the normal predator-prey cycle that would come out of this system, and sure enough, it produces peaks in the viruses. It also comes fairly close to the kinds of observations (we’ve seen). As a modeler, that tells me that this is at least a viable explanation for cycles of viruses in nature.”

And given the large number of known symbiotic relationships between host organisms and those living within them, this viral dynamic may well be playing out in diverse ecosystems across the planet, Van Etten said.

“We suspect that, if people look, they’re going to find similar (interactions),” said Van Etten, who co-directs the Nebraska Center for Virology. “In fact, we have suggested that coral reefs might be one possibility … where something like this could take place. There are certainly places to look.”

The team previously collaborated with Johns Hopkins University, the University of Nebraska Medical Center and Nebraska Wesleyan University to show that a chlorovirus causes cognitive impairments in mice and may be able to replicate in some animal cells.


Contacts and sources:
University of Nebraska-Lincoln
on November 17, 2016