One of the biggest challenges in cognitive or rehabilitation neurosciences is the ability to design a functional hybrid system that can connect and exchange information between biological systems, like neurons in the brain, and human-made electronic devices.

A large multidisciplinary effort of researchers in Italy brought together physicists, chemists, biochemists, engineers, molecular biologists and physiologists to analyze the biocompatibility of the substrate used to connect these biological and human-made components, and investigate the functionality of the adhering cells, creating a living biohybrid system.

Immunofluorescence analysis of SH-SY5Y cells treated for 5 days with 10uM Retinoic Acid and 50ng/ml BDNF for the next 3 days. The DAPI fluorescence stain is blue and Beta-tubulin is green. 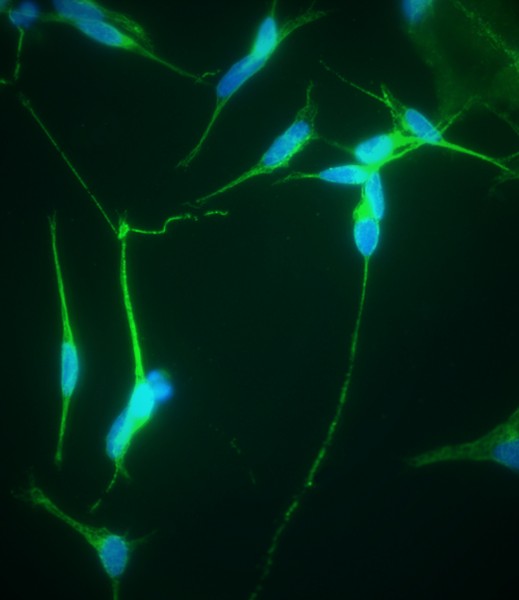 In an article appearing this week in AIP Advances, from AIP Publishing, the research team used the interaction between light and matter to investigate the material properties at the molecular level using Raman spectroscopy, a technique that, until now, has been principally applied to material science. Thanks to the coupling of the Raman spectrometer with a microscope, spectroscopy becomes a useful tool for investigating micro-objects such as cells and tissues. Raman spectroscopy presents clear advantages for this type of investigation: The molecular composition and the modiﬁcation of subcellular compartments can be obtained in label-free conditions with non-invasive methods and under physiological conditions, allowing the investigation of a large variety of biological processes both in vitro and in vivo.

Once the biocompatibility of the substrate was analyzed and the functionality of the adhering cells investigated, the next part of this puzzle is connecting with the electronic component. In this case a memristor was used.

“Its name reveals its peculiarity (MEMory ResISTOR), it has a sort of “memory”: depending on the amount of voltage that has been applied to it in the past, it is able to vary its resistance, because of a change of its microscopic physical properties,” said Silvia Caponi, a physicist at the Italian National Research Council in Rome. By combining memristors, it is possible to create pathways within the electrical circuits that work similar to the natural synapses, which develop variable weight in their connections to reproduce the adaptive/learning mechanism. Layers of organic polymers, like polyaniline (PANI) a semiconductor polymer, also have memristive properties, allowing them to work directly with biological materials into a hybrid bio-electronic system.

“We applied the analysis on a hybrid bio-inspired device but in a prospective view, this work provides the proof of concept of an integrated study able to analyse the status of living cells in a large variety of applications that merges nanosciences, neurosciences and bioelectronics,” said Caponi. A natural long-term objective of this work would be interfacing machines and nervous systems as seamlessly as possible.

The multidisciplinary team is ready to build on this proof of principle to realize the potential of memristor networks.

“Once assured the biocompatibility of the materials on which neurons grow,” said Caponi, “we want to define the materials and their functionalization procedures to find the best configuration for the neuron-memristor interface to deliver a full working hybrid bio-memristive system.”