New research from North Carolina State University, the Chinese Academy of Sciences and Linyi University has found evidence of original keratin and melanosome preservation in a 130-million-year-old Eoconfuciusornis specimen. The work extends the timeframe in which original molecules may preserve, and demonstrates the ability to distinguish between ancient microstructures in fossils.

Eoconfuciusornis, crow-sized primitive birds that lived in what is now China around 130 million years ago, are the earliest birds to have a keratinous beak and no teeth, like modern birds. Previous studies argued that the feathers of these and other ancient birds and dinosaurs preserved small, round structures interpreted to be melanosomes - pigment-containing organelles that, along with other pigments, give feathers their color. However, without additional evidence, it was not possible to prove that these structures weren't just microbes that had coated the feather during decomposition and fossilization. 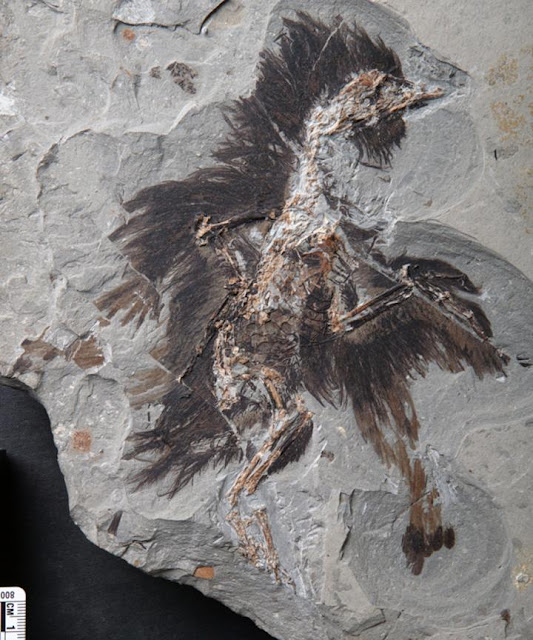 Yanhong Pan, associate research fellow at the Chinese Academy of Sciences and corresponding author of a paper describing the research and co-author Mary Schweitzer, NC State professor of biology with a joint appointment at the North Carolina Museum of Natural Sciences, examined feathers from an Eoconfuciusornis specimen taken from the Jehol Biota site in northern China, which is renowned for excellent fossil preservation.

"If these small bodies are melanosomes, they should be embedded in a keratinous matrix, since feathers contain beta-keratin," Schweitzer says. "If we couldn't find the keratin, then those structures could as easily be microbes, or a mix of microbes and melanosomes - in either case, predictions of dinosaur shading would not be accurate."

Pan, Schweitzer and their team used both scanning and transmission electron microscopy to get microscopic details of the feather's surface and its internal structure. They also utilized immunogold labeling - in which gold particles are attached to antibodies that bind to particular proteins in order to make them visible in electron microscopy - to show that filaments within the feathers were keratin.

Finally, they mapped copper and sulfur to these feathers at high resolution. Sulfur was broadly distributed, reflecting its presence in both keratin and melanin molecules in modern feathers. However copper, which is only found in modern melanosomes, and not part of keratin, was only observed in the fossil melanosomes. These findings both support the identity of the melanosomes and indicate that there was no mixing or leaching during decomposition and fossilization.

"This study is the first to demonstrate evidence for both keratin and melanosomes, using structural, chemical and molecular methods," says Pan. "These methods have the potential to help us understand - on the molecular level - how and why feathers evolved in these lineages."

The work appears in Proceedings of the National Academy of Sciences. The research was supported in part by the National Science Foundation (EAR-1344198), the David and Lucille Packard Foundation, and the National Natural Science Foundation of China. NC State's Wenxia Zheng and Elena Schroeter, and Alison Moyer (now at Drexel University), the Chinese Academy of Sciences' Zhonghe Zhou, Jingmai K. O'Connor and Min Wang, and Linyi University's Xiaoting Zheng and Xiaoli Wang contributed to the work.