A scientists has used zebrafish to help mammalian hearts regenerate, including promising results in human heart cells in vitro.

Many lower forms of life on earth exhibit an extraordinary ability to regenerate tissue, limbs, and even organs—a skill that is lost among humans and other mammals. Now, a University of Pittsburgh researcher has used the components of the cellular “scaffolding” of a zebrafish to regenerate heart tissues in mammals, specifically mice, as well as exhibiting promising results in human heart cells in vitro.

The findings offer promise to overcoming heart disease, the leading cause of death for men and women.

The study, led by Yadong Wang, the William Kepler Whiteford Professor in Bioengineering in the Swanson School of Engineering and the principal investigator of the Biomaterials Foundry at Pitt, found that a single administration of extracellular matrices (ECM) from zebrafish hearts restored the function of the heart and regenerated adult mouse heart tissues after acute myocardial infarction.

“The heart beats as if nothing has happened to it,” said Wang. “And our approach is really simple.”

ECM are the architectural foundations of tissues and organs; not only do they provide a “scaffolding” on which cells can grow and migrate, they assist in the signaling necessary for the organ to develop, grow, or regenerate.

Graphic of a Myocardiocyte (Heart Muscle Cell), including organelles and cell membrane functions. 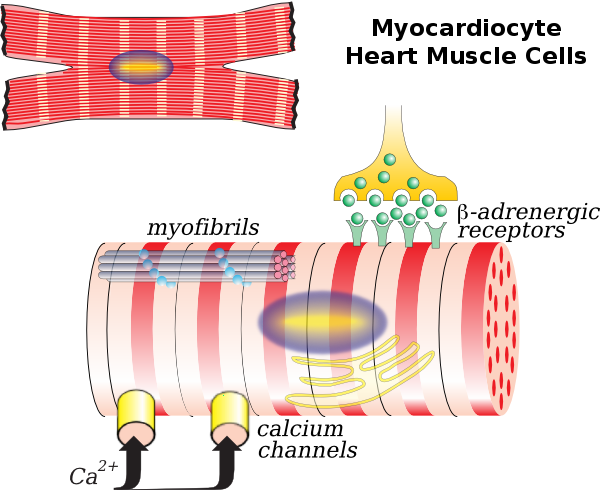 In mammals, the heart quickly loses the ability to regenerate after the organism is born, except for a brief period after birth. In lower animals, such as zebrafish, the heart retains that ability throughout their lives: up to 20 percent of a zebrafish’s heart can be damaged or removed, and within days the heart’s capacity has been fully restored.

Wang and his team first separated the ECM from the cells so that the recipient heart would not reject the treatment. They did this by freezing the zebrafish cardiac tissue, causing the cell membranes to burst and allowing the researchers to retrieve the ECM, a process called decellularization. Wang noted that he and his colleagues are among the first to decellularize non-mammalian tissues for applications in regenerative medicine. They then injected the ECM into the hearts of mice with damaged heart muscles and watched the hearts repair themselves.

“It’s difficult to inject foreign cells into a body because the body will recognize them as foreign and reject them; that’s not the case with ECM,” said Wang. Wang explained that, because ECMs are composed of collagen, elastin, carbohydrates and signaling molecules and have no cell surface markers, DNA or RNA from the donor, the recipient is less likely to reject the treatment.

Wang said that restored function starts almost immediately, and healing is noticeable as early as five days after treatment; within a week, his team could see the heart beating more strongly than the hearts of the untreated animals.

The researchers tested the effectiveness of ECM from normal zebrafish and from zebrafish with damaged hearts, in which the ECM had already begun the healing process. They found that while both types of ECM were effective in repairing damage to the mice hearts, the ECM obtained from the zebrafish hearts that were healing were even more potent in restoring heart function in the mice.

Wang is now working on a process to regenerate nerves in mammals using the same process and hopes to expand the heart treatments to larger animals in a future study.

The work was funded in part by the American Heart Association and National Institutes of Health.