Natural Disasters: Robots to the Rescue

The 2015 earthquake in Nepal is just one example of a recent natural disaster that required search and rescue operations. An EU-funded security research project has developed new robotic tools for such operations with great success. Some of its developments are already commercially available and ready to be deployed in order to save lives. 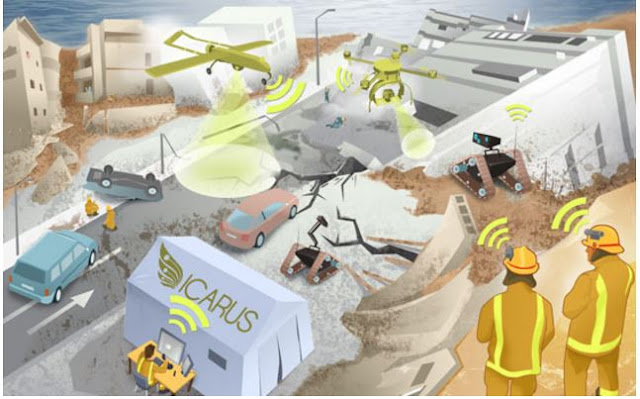 Realizing that disaster management could benefit from the targeted use of robotic technology, which had not yet been effectively deployed in this field, the ICARUS project set out at the beginning of 2012 to adapt existing robotic systems for search and rescue (SAR) missions. By the end of the project, ICARUS had adapted three aerial robotic systems, two ground robots and three types of marine vehicle.

“We believe that you cannot develop one sort of ‘Frankenstein’ system – be it marine, land-based or aerial – that is good at all tasks. If you try to do that, you end up with a system that is bad for everything. Therefore, we have multiple platforms, taking a multi-scaled approach,” explains Geert De Cubber, who coordinates the project on behalf of the Belgian Royal Military Academy (RMA).

Various systems to be prepared for any crisis

On the aerial side, there is a solar aircraft, which beat the world record for continuous flight, staying in the air for a full 81 hours. The plane is 6 metres long, but only weighs 6 kg and fits into a small box when unmounted. It also has another important plus: it can fly at a low altitude, which makes it easier to obtain the necessary flight permits.

The European Robotics project, ICARUS, aims at developing robotic tools that can detect and rescue human beings. These systems will be used to help “human” crisis intervention teams.

The second unmanned aerial vehicle (UAV) is an octocopter, i.e. an aircraft with eight rotors. Equipped with visual and infrared cameras, it can not only produce very accurate 3D maps of the environment for incident mapping but can also drop rescue kits.

The smaller third platform is much more autonomous when it comes to taking decisions and navigating as it is designed to enter semi-destroyed buildings where the human controller is likely to lose communication with the device once on the inside. With a very powerful, yet light and power-saving stereo camera sensor on board, it can do 3D reconstruction in real-time, a feature crucial for effective indoor navigation.

This sensor, one of ICARUS’ earliest successes, has been on the market since 2014.

In addition, the project’s larger land-based vehicles can break a building’s wall to clear a passage to the people inside, clear away debris or position pneumatic poles to stabilise unsound structures. The smaller vehicle that can go inside buildings is equipped with an arm for sensing and grabbing objects, as well as searching for victims.

Lastly, the consortium built three platforms for SAR operations at sea: a slower vessel for detection as well as for dealing with incidents close to the harbour, a fast vessel useful in the area of border control, which is also already being commercialised, and ‘unmanned capsules’, a smaller kind of boat carrying life rafts. The capsules can be deployed from the larger vessels.

“It is dangerous to come too close to victims with the faster, larger boats,” De Cubber points out. “So, we use the faster vehicles to get to the victims, but remain at a safe distance where we then deploy the unmanned capsule, which can propel itself very close to the victim. And there it deploys the self-inflating life raft for the victims to climb on board.”

All of the systems have successfully been put to the test in land and sea trials, proving that they work well within standard operating procedures. By involving the end-users along the way, ICARUS made sure that the systems met the real-life needs of the operators in the field, who are often under immense pressure in a crisis situation.

The project consortium made a point, for example, of developing user-friendly platforms that are easy to operate, as well as the necessary training tools. The command and control infrastructure interfaces with a command and control system that the operators already know, such as the Global Disaster Alert and Coordination System (GDACS). The ICARUS system pulls the data from GDACS and presents it to the end-user, overlaying this information with what the robots have discovered.

“We don’t want to replace humans. Instead, we want to assist them,” De Cubber emphasises. “We know that it is very difficult for human operators to look at those huge data streams from the different robotic platforms. And that’s why we wanted to automate this process.”

Contacts and sources:
EC Research and Innovation
on November 28, 2016