Mood ring materials” could play an important role in minimizing and mitigating damage to the nation’s failing infrastructure.  Mood ring technology may soon detect cracks in bridges and aircraft

The American Society of Civil Engineers has estimated that more than $3.6 trillion in investment is needed by 2020 to rehabilitate and modernize the nation’s failing infrastructure. President-elect Donald Trump has promised to establish a $1 trillion infrastructure improvement program when he takes office.

An important element in any modernization effort will be the development of new and improved methods for detecting damage in these structures before it becomes critical. That is where “mood ring materials’ comes in. 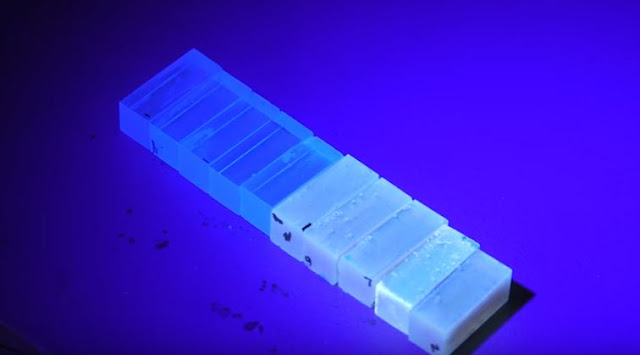 Sprinkle a pixie dust of nanoparticles into a batch of clear polymer resin and you get “a smart material that changes color when it is damaged or about to fail, what I call a ‘mood ring material,’” explained Cole Brubaker, a doctoral student in civil engineering who is part of an interdisciplinary research team at Vanderbilt University’s Laboratory for Systems Integrity and Reliability (LASIR) developing the new sensing system.

Smart sensing technologies are one of the hot new fields in civil, mechanical and aerospace engineering. These efforts have generally focused on developing networks of physical sensors that are attached to structures of interest. However, this approach has been hindered by high cost as well as power and data processing requirements.

The LASIR researchers are taking a different tack by incorporating fluorescent nanoparticles into the material itself that react to stress by changing their optical properties in order to create a new kind of detection system that can monitor these structures in an efficient and cost-effective fashion.

“Currently, there are two ways to keep everything from bridges to aircraft safe,” said LASIR Director, Douglas Adams, Daniel F. Flowers Professor of the civil and environmental engineering. “One is to send people out to look at them with a flashlight. The problem with this is that it is labor-intensive and the people can’t see very small cracks when they form. The other is to install elaborate sensor networks that constantly look for small cracks and detect them before they grow too large. The problem is that these networks are very expensive and, in the case of aircraft, add a lot of weight. “So we need to somehow change the materials we are using so they illuminate these tiny cracks.”

The team’s initial studies, published last April in the Proceedings of the SPIE Conference on Sensors and Smart Structures Technologies for Civil, Mechanical and Aerospace Systems, have determined that adding a tiny concentration of special nanoparticles (1 to 5 percent by weight) to an optically clear polymer matrix produces a distinctive light signature that changes as the material is subjected to a broad range of compressive and tensile loads.

The Vanderbilt group isn’t the only research team using nanoparticles to create smart materials, but they have a special advantage. They are using a particular type of nanoparticle called a white light quantum dot. These quantum dots are unique because they emit white light where other quantum dots only emit light at specific wavelengths.

These special quantum dots were accidentally discovered in 2005 in the laboratory of Sandra Rosenthal, Jack and Pamela Egan Professor of Chemistry at Vanderbilt. “We were trying to make the smallest cadmium selenide quantum dots possible and, when we did, we were astonished to discover that they emit in a broad spectrum,” she recalled.

“White light quantum dots have very unique optical properties compared with other nanoparticles,” said Talitha Frecker, a chemistry graduate student who is participating in the study. “The white light fluorescence is a surface phenomenon.”

Fast forward to 2013 when Adams moved to Vanderbilt. When he learned about Rosenthal’s discovery, he realized that her quantum dots were tailor made for creating smart materials: “When we put these nanoparticles into a material, they observe and react to what is going on around them.”

Now Adam’s expectation has been confirmed by the series of preliminary tests that Brubaker and his colleagues have conducted. They have coated fiberglass and aluminum strips with a polymer coating containing white light quantum dots and subjected them to varying degrees of external load. They have determined that the intensity of the emission spectrum produced by the quantum dots decreases as the load increases. The drop-off is largest with the initial loading and gradually decreases at higher levels of load.

“The mechanism is still a bit unclear, but we have demonstrated that entrapping these quantum dots in ultra-thin polymer films on metal surfaces can provide advance warning when the underlying metal is about to sustain physical or chemical damage,” said Professor of Chemical and Biomolecular Engineering Kane Jennings, who is participating in the project along with doctoral student Ian Njoroge.

The researchers theorize that the quantum dots emit light in a broad spectrum because more than 80 percent of the atoms lie on the surface. They also know that the bonds between the surface atoms and molecules surrounding them plays a critical role.

“The end result is that the strength of the quantum dot emissions gives us a permanent record of the level of stress that a material has experienced,” said Brubaker.

In this fashion, the researchers have verified that the material can act as a new kind of strain gauge that permanently records the cumulative amount of stress that the material to which it is applied experiences.

In their initial experiments, the engineers have kept the loads relatively modest, under 1,250 pounds, well within the elastic limits that the materials can withstand without permanent damage. This has provided them a baseline that they can use to compare to the results they get as they move to higher loads that cause the materials to begin failing.

The researchers know that things will get more complicated as they ramp up the stresses they are applying.

For example, in a set of tests they ran with epoxy cylinders, which deformed into a barrel shape under compression, they found that the emission spectrum actually increased, instead of decreasing. They hypothesize that this increase in emission occurred because the deformation actually squeezed the nanoparticles closer together so there were more of them within the small area where they were measuring the emission.

The researchers have already encountered one of these complications when they tested surface coated fiberglass samples. When these samples were loaded under tensile stress, the emissions spectrum decreased much as it did with the aluminum samples until the load reached about 350 pounds. But then it began to climb.

Graph shows how the spectra of the white light quantum dots epoxy on an aluminum strips decreases as the tensile load on the strip increases.

By the popping and cracking coming from the samples, they realized this was the point when individual fibers in the sample began breaking. They hypothesize that the emission increased because quantum dots that were previously hidden within the fiberglass matrix were exposed when fibers began to fail. This again increased the number of quantum dots within a given area, causing the overall emission level to rise.

The LASIR team also realizes there is another problem that they will have to solve to make a practical damage detection system. The quantum dots suffer from photo-bleaching. That is, when they are exposed to light they gradually lose their fluorescence over time. As a result, the material must be shielded from external light.

“There is a lot we have to learn before we can create a smart material that is ready for real world applications, but all the signs are positive,” said Adams. “Some of our commercial partners are very interested so there is a good chance that it will be adopted if it performs as well as we think it will.”