Scientists have boosted the ability of plants to grow faster and absorb more carbon dioxide.

Researchers report in the journal Science that they can increase plant productivity by boosting levels of three proteins involved in photosynthesis. In field trials, the scientists saw increases of 14 percent to 20 percent in the productivity of their modified tobacco plants. The work confirms that photosynthesis can be made more efficient to increase plant yield, a hypothesis some in the scientific community once doubted was possible.

Many years of computational analysis and laboratory and field experiments led to the selection of the proteins targeted in the study. The researchers used tobacco because it is easily modified. Now they are focusing on food crops.

As computer models predicted, genetically modified plants are better able to make use of the limited sunlight available when their leaves go into the shade, researchers report. 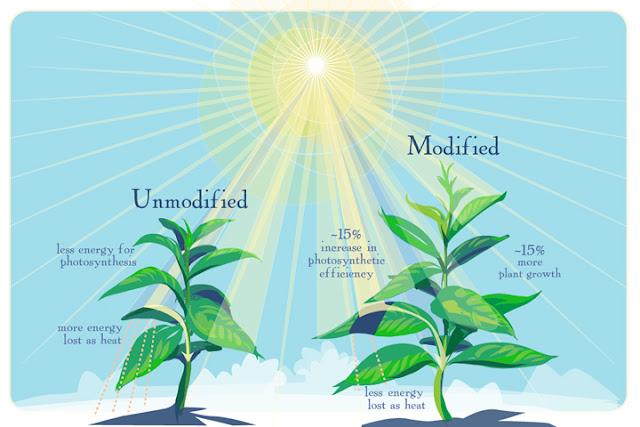 "We don't know for certain this approach will work in other crops, but because we're targeting a universal process that is the same in all crops, we're pretty sure it will," said University of Illinois plant biology and crop sciences professor Stephen Long, who led the study with postdoctoral researchers Katarzyna Glowacka and Johannes Kromdijk. (Watch a video about the research.)

The team targeted a process plants use to shield themselves from excessive solar energy.

"Crop leaves exposed to full sunlight absorb more light than they can use," Long said. "If they can't get rid of this extra energy, it will actually bleach the leaf."

Plants protect themselves by making changes within the leaf that dissipate the excess energy as heat, he said. This process is called nonphotochemical quenching.

"But when a cloud crosses the sun, or a leaf goes into the shade of another, it can take up to half an hour for that NPQ process to relax," Long said. "In the shade, the lack of light limits photosynthesis, and NPQ is also wasting light as heat."

Long and former graduate student Xinguang Zhu used a supercomputer at the National Center for Supercomputing Applications at the U. of I. to predict how much the slow recovery from NPQ reduces crop productivity over the course of a day. These calculations revealed "surprisingly high losses" of 7.5 percent to 30 percent, depending on the plant type and prevailing temperature, Long said.

Long's discussions with University of California, Berkeley researcher and study co-author Krishna Niyogi - an expert on the molecular processes underlying NPQ -suggested that boosting levels of three proteins might speed up the recovery process.

To test this concept, the team inserted a "cassette" of the three genes (taken from the model plant Arabidopsis) into tobacco.

"The objective was simply to boost the level of three proteins already present in tobacco," Long said.

The researchers grew seedlings from multiple experiments, then tested how quickly the engineered plants responded to changes in available light.

A fluorescence imaging technique allowed the team to determine which of the transformed plants recovered more quickly upon transfer to shade. The researchers selected the three best performers and tested them in several field plots alongside plots of the unchanged tobacco.

Two of the modified plant lines consistently showed 20 percent higher productivity, and the third was 14 percent higher than the unaltered tobacco plants.

"Tobacco is grown for its leaves, which were substantially increased," Kromdijk said. "But in food crops, it will be whatever we eat from the plant - the fruit, the seeds or the roots - that we will need to increase."

Other experiments have demonstrated that increasing photosynthesis by exposing plants to high carbon dioxide results in more seeds in wheat, soy and rice, he said.

"Now we can do this genetically, and we are actively working on repeating our work in various food crops," he said.

"This finding offers some rare good news at a time of dire forecasts of future food shortages," Glowacka said.

Stephen P. Long, a professor of crop sciences and of plant biology, center, with postdoctoral researchers Johannes Kromdijk, left, and Katarzyna Glowacka, increased plant yield by altering a mechanism plants use to protect themselves from excess solar energy. 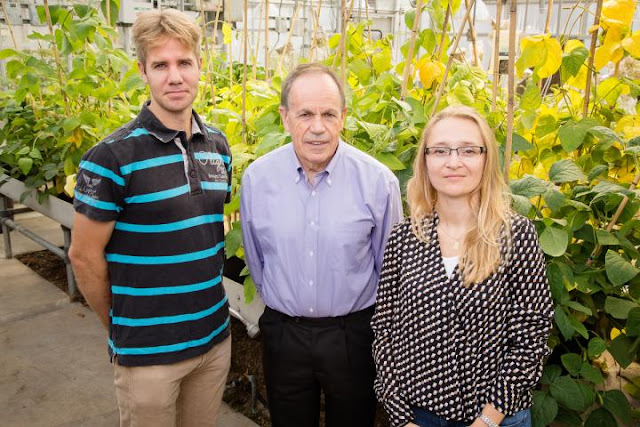 "The United Nations predicts that by 2050 we're going to need to produce about 70 percent more food on the land we're currently using," Long said. "My attitude is that it is very important to have these new technologies on the shelf now because it can take 20 years before such inventions can reach farmer's fields. If we don't do it now, we won't have this solution when we need it."

The Bill and Melinda Gates Foundation funded this research, with the stipulation that any new agricultural products that result from the work be licensed in such a way that the technology is freely available to farmers in poor countries of Africa and South Asia.

This work was conducted as part of the Realizing Increased Photosynthetic Efficiency program at the Carl R. Woese Institute for Genomic Biology at Illinois.

Contacts and sources:
Diana Yates
University of Illinois at Urbana-Champaign

The paper "Improving photosynthesis and crop productivity by accelerating recovery from photoprotection" is available from scipak@aaas.org.
on November 18, 2016