Man-Made Noise Can Affect How Animals Use Information From Scents

Research by scientists at the University of Bristol has, for the first time, found that man-made noise can have a detrimental impact on an animal’s use of scent – putting them at greater risk of being attacked by predators.

Professor Andy Radford from the School of Biological Sciences said: "We've known for a long time that noise from urbanisation, traffic and airports can detrimentally affect humans by causing stress, sleep deprivation, cardiac problems and slower learning. What’s becoming increasingly clear is that a lot of other species – mammals, birds, fish, insects and amphibians – are also impacted in all sorts of ways by anthropogenic, or man-made, noise."

Two dwarf mongooses who took part in the experiment 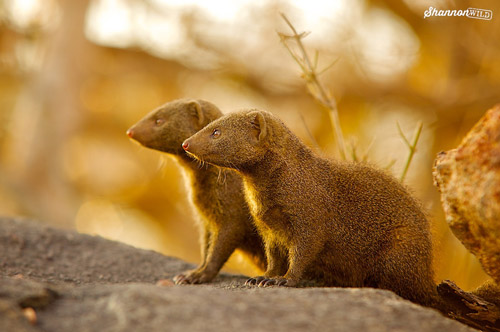 One obvious way in which man-made noise can cause animals problems is through the masking of valuable acoustic information. Lead author Amy Morris-Drake says: "What our study shows for the first time is that there could also be disruption to the use of olfactory information; man-made noise could affect decision-making based on information gathered using a different sense."

The Bristol team's experiment used groups of wild dwarf mongooses that were so familiar with the researchers’ close presence that they could walk within a few feet of them. Co-author Dr Julie Kern adds: "This habituation allows us to conduct ecologically relevant experiments in the mongooses' natural habitat while collecting incredibly detailed and accurate information."

Closely monitoring the mongooses, the team found that their adaptive responses to predatory cues, such as increased inspection of the cue, vigilance scanning for danger and more time spent near the safety of the burrow, were all disrupted by road-traffic noise.

Morris-Drake said: "While lots of work on the impacts of man-made noise has shown effects on animal vocalisations, movement patterns and foraging, it is often difficult to determine what that might mean for survival or reproductive success. By looking at responses to cues about a predator’s presence, there is a direct link to survival; making the wrong decision can result in death."

Professor Radford concluded: "Our study suggests that noise pollution can have a negative effect in terms of information use – in this case the impact on responses to smell, a very common information source in mammals. Given the demonstrated effects, considering the interactions among multiple sensory channels is critically important if we are to understand fully the consequences of human-induced environmental change."

‘Cross-modal impacts of anthropogenic noise on information use’ by Amy Morris-Drake, Julie M. Kern and Andrew N. Radford in Current Biology.
on November 30, 2016