Every year, trade winds over the Sahara Desert sweep up huge plumes of mineral dust, transporting hundreds of teragrams — enough to fill 10 million dump trucks — across North Africa and over the Atlantic Ocean. This dust can be blown for thousands of kilometers and settle in places as far away as Florida and the Bahamas.

The Sahara is the largest source of windblown dust to the Earth’s atmosphere. But researchers from MIT, Yale University, and elsewhere now report that the African plume was far less dusty between 5,000 and 11,000 years ago, containing only half the amount of dust that is transported today.

In a paper published today in Science Advances, the researchers have reconstructed the African dust plume over the last 23,000 years and observed a dramatic reduction in dust beginning around 11,000 years ago. They say this weakened plume may have allowed more sunlight to reach the ocean, increasing its temperature by 0.15 degrees Celsius — a small but significant spike that likely helped whip up monsoons over North Africa, where climate at the time was far more temperate and hospitable than it is today.

Dust blowing through the Sahara Desert in 2012. Researchers have found that the plume was far less dusty between 5,000 and 11,000 years ago, containing only half the amount of dust that is transported today. 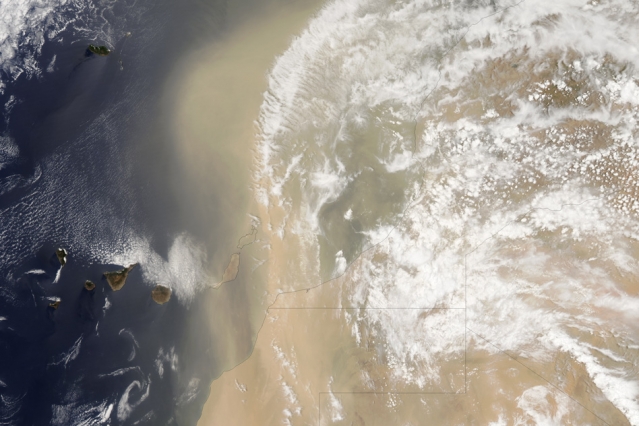 
“In the tropical ocean, fractions of a degree can cause big differences in precipitation patterns and winds,” says co-author David McGee, the Kerr-McGee Career Development Assistant Professor in MIT’s Department of Earth, Atmospheric and Planetary Sciences. “It does seem like dust variations may have large enough effects that it’s important to know how big those impacts were in past and future climates.”

Around 11,000 years ago, the Earth had just emerged from the last ice age and was beginning a new, interglacial epoch known as the Holocene. Geologists and archaeologists have found evidence that during this period the Sahara was much greener, wetter, and more livable than it is today.

“There was also extensive human settlement throughout the Sahara, with lifestyles that would never be possible today,” McGee says. “Researchers at archaeological sites have found fish hooks and spears in the middle of the Sahara, in places that would be completely uninhabitable today. So there was clearly much more water and precipitation over the Sahara.”

This evidence of wet conditions shows that the region experienced regular monsoon rains during the early Holocene. This was primarily due to the slow wobbling of Earth’s axis, which exposed the Northern Hemisphere to more sunlight during summer; this, in turn, warmed the land and ocean and drew more water vapor — and precipitation — over North Africa. Increased vegetation in the Sahara may have also played a role, absorbing sunlight and heating the surface, drawing more moisture over the land.

“The mysterious thing is, if you try to simulate all these changes in these early and mid-Holocene climates, the models intensify the monsoons, but nowhere near the amounts suggested by the paleodata,” McGee says. “One of the things not factored into these simulations is changes in windblown dust.”

In their results published today, McGee and colleagues propose a reduction in African dust may indeed have contributed to increasing monsoon rains in the region. The researchers came to their conclusion after estimating the amount of long-range windblown dust emitted from Africa over the last 23,000 years, from the end of the last ice age to today.


Researchers reconstructed the African dust plume over the last 23,000 years by analyzing sediment core samples from the Bahamas, pictured here. They analyzed the samples for isotopes of thorium — an element that exists in windblown dust worldwide, at known concentrations. As is a common practice, they replaced the sampled areas of each core with foam. 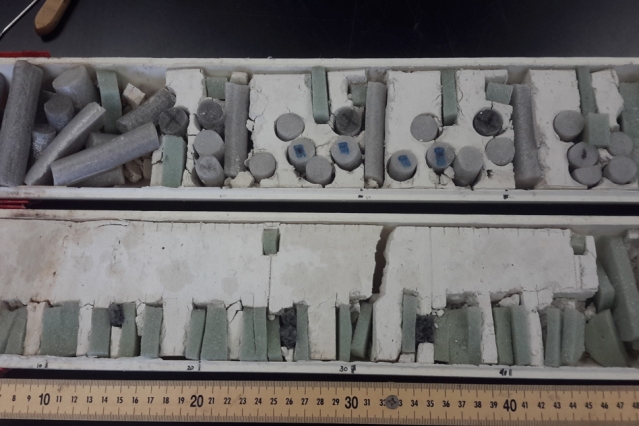 They focused on dust transported long distances, as these particles are small and light enough to be lifted and carried through the atmosphere for days before settling thousands of kilometers away from their source. This fine-grained dust scatters incoming solar radiation, cooling the ocean’s surface and potentially affecting precipitation patterns, depending on how much dust is in the air.

To estimate how the African dust plume has changed over thousands of years, the team looked for places where dust should accumulate rapidly. Dust can sink to the floor of open ocean, but there layers of sediment build up very slowly, at a rate of 1 centimeter every 1,000 years.

Places like the Bahamas, by contrast, accumulate sediment much more quickly, making it easier for scientists to determine the ages of particular sediment layers. What’s more, it’s been shown that most of the windblown dust that has accumulated in the Bahamas originated not from local regions such as the U.S., but from the Sahara.

McGee and his colleagues obtained sediment core samples from the Bahamas that were collected in the 1980s by scientists from the Woods Hole Oceanographic Institution. They brought the samples back to the lab and analyzed their chemical composition, including isotopes of thorium — an element that exists in windblown dust worldwide, at known concentrations.

In this way, the team analyzed sediment layers from the last 23,000 years, and showed that around 16,000 years ago, toward the end of the last ice age, the dust plume was at its highest, lofting at least twice the amount of dust over the Atlantic, compared to today. However, between 5,000 and 11,000 years ago, this plume weakened significantly, with just half the amount of today’s windblown dust.

Colleagues at Yale University then plugged their estimates into a climate model to see how such changes in the African dust plume would affect both ocean temperatures in the North Atlantic and overall climate in North Africa. The simulations showed that a drop in long-range windblown dust would raise sea surface temperatures by 0.15 degrees Celsius, drawing more water vapor over the Sahara, which would have helped to drive more intense monsoon rains in the region.

“The modeling showed that if dust had even relatively small impacts on sea surface temperatures, this could have pronounced impacts on precipitation and winds both in the north Atlantic and over North Africa,” McGee says. Noting that the next key step is to reduce uncertainties in the modeling of dust’s climate impacts, he adds: “We’re not saying, the expansion of monsoon rains into the Sahara was caused solely by dust impacts. We’re saying we need to figure out how big those dust impacts are, to understand both past and future climates.”

Ina Tegen, a professor at the Leibniz Institute for Tropospheric Research in Germany, says the group’s results suggest that “dust effects today may be considerable as well.”

“Dust loads vary with changing climate, and due to the effects of dust on [solar] radiation, ice formation in clouds, and the carbon cycle, this may cause important climate feedbacks,” says Tegen, who was not involved in the research. “The changing climate since the last ice age can be considered a ‘natural laboratory’ to study such effects. Understanding the past is the basis for predicting future changes with any confidence.”

This research was supported, in part, by the National Science Foundation.