Around 300 million years ago, the landmass that is now North America collided with Gondwana, a supercontinent comprised of present-day Africa and South America. That clash of continents lifted tons of rock high above the surrounding terrain to form the southern end of the Appalachian Mountains now seen in Alabama, Tennessee and Georgia. A team of geophysicists has reconstructed the terminal phase of that collision and developed a new picture of how it unfolded.

The study, led by Brown University researchers, used seismic monitoring stations to create a sonogram-like image of the crust beneath the southern U.S., near of the southern base of the Appalachians. The research shows that Gondwana crust was thrust atop North America when the two continents collided, sliding northward as much as 300 kilometers before the two continents separated and drifted apart about 200 million years ago. The process revealed by the study looks a lot like the process that is building the Himalayas today, as the Eurasian continent is pushing atop the Indian subcontinent.

The region in color denotes a shear zone where the continent of Gondwana slip atop proto-North America 300 million years ago. 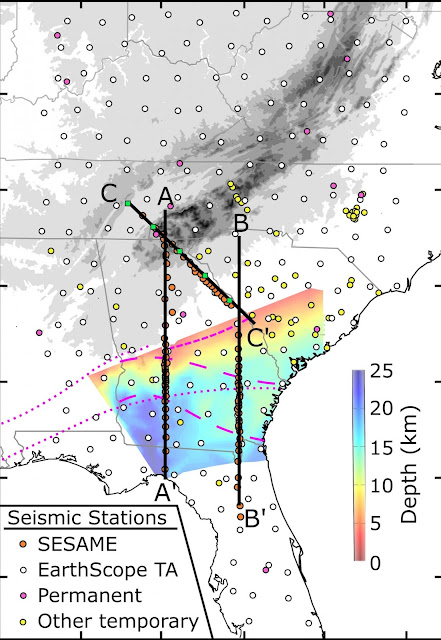 "We show that a continental collision that occurred 300 million years ago looks a lot like the collision we see in the Himalayas today," said Karen Fischer, a professor in Brown's Department of Earth, Environmental and Planetary Sciences and a co-author of the study. "This is the best-documented case I'm aware of in which the final suture between ancient continental crusts has a geometry similar to the present-day India-Eurasia crustal contact beneath the Himalayas."

The research was led by Emily Hopper, who earned her doctorate from Brown in 2016 and is now a postdoctoral fellow at the Lamont-Doherty Earth Observatory of Columbia University. The study is published online in the journal Geology.

For the study, the research team placed 85 seismic monitoring stations across southern Georgia and parts of Florida, North Carolina and Tennessee. The researchers also used data from the Earthscope Transportable Array, a rolling array of seismic stations that made its way across the contiguous U.S. between 2005 and 2015. In all, 374 seismic stations recorded the faint vibrational waves from distant earthquakes as they traveled through the rocks beneath.

Acoustic energy from earthquakes can travel though the Earth as different types of waves, including shear waves, which oscillate perpendicular to the direction of propagation, and compressional waves, which oscillate in the same direction as they propagate. By analyzing the extent to which shear waves convert to compression waves when they hit a contrast in rock properties, the researchers could create a seismic image of the subsurface crust.

The study detected a thin continuous layer of rock that starts near the surface and slopes gently to the south to depths of approximately 20 kilometers, in which earthquake waves travel faster than in the surrounding rocks. That layer stretches southward about 300 kilometers from central Georgia to northern Florida. It spans about 360 kilometers east to west, from the central part of South Carolina, across all of Georgia and into eastern Alabama.

The mostly likely explanation for that anomalous layer, the researchers say, is that it's a shear zone -- the contact along which Gondwanan plate slid atop of the proto-North American plate.

"Where these two crustal blocks came into contact, there would have been tremendous deformation that aligned the mineral grains in the rocks and changed the propagation velocities of the seismic waves," Fischer said. "So our preferred explanation for this continuous layer is that we're seeing mineral alignment on the shear zone between these two plates."

The presence of this widespread, gently sloped shear zone paints a new picture of the final stages of the collision between the two continents. Researchers had long thought that proto-North American and Gondwana collided on a shear zone with a much steeper slope, leading some to the view that the two plates slid laterally past each other. But such a steep shear zone would be in stark contrast to the 300 kilometers of nearly horizontal shear zone found in this new study.

The similarity between the two events tells scientists that there's consistency over time in the way mountains are built, Fischer says.

"When we think of mountain-building, the Himalayas are the archetype," she said. "It's interesting that a collision that took place 300 million years ago is very similar to one happening today."

And that has implications for understanding the way the Earth's crust has evolved.

Citation: Hopper and Fischer's co-authors on the paper were Lara Wagner of the Carnegie Institution for Science and Robert Hawman of the University of Georgia. The work was supported by the National Science Foundation's Earthscope Program (EAR-0844276, EAR-0844186 and EAR-0844154).